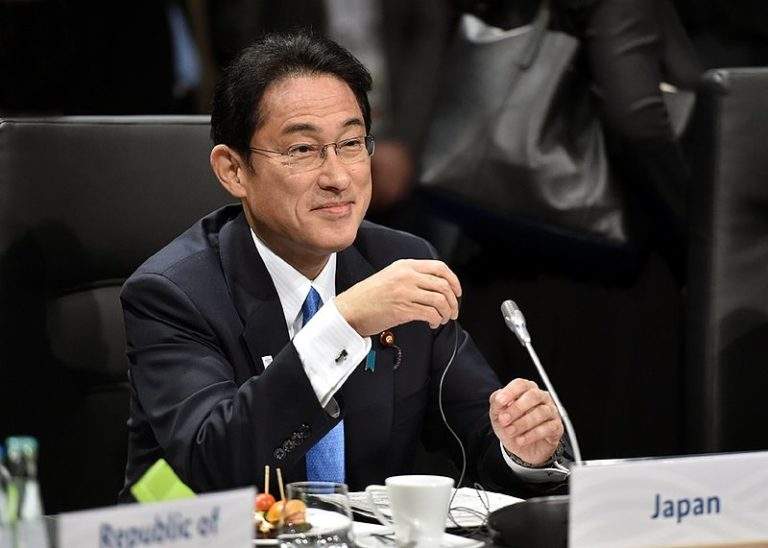 Japanese Politics After Suga: Who is Fumio Kishida?

Who is Fumio Kishida, the new leader of Japan's Liberal Democratic Party succeeding Yoshihide Suga after his stepping down as Prime Minister? Standing for the 31 October 2021 general elections we look ahead and assess who he is and what he represents within the party and for the country.

On 3 September 2021, Japanese Prime Minister Yoshihide Suga stepped down just one year after he took power from Shinzo Abe in September 2020. According to a nationwide poll on Suga’s cabinet, his popularity fell from 66.4% in September 2020 to 26% in August 2021, an all-time low since the start of his tenure. His resignation prompted a race for the position of the party’s leadership and, consequently, Prime Minister. The ultimate winner was Mr Fumio Kishida, a dovish moderate, popular in the centre-right LDP (Liberal Democratic Party) but not nearly as much amongst the Japanese public. This article provides an assessment of the most recent events in Japanese politics, from Suga’s resignation to the election of PM Kishida and his political stances, with a final remark about possible political consequences for the EU.

Suga started his tenure with a high popular approval of around 70%. However, this had decreased to 41% in January 2021, before plummeting in August 2021, reaching below 30% as a result of how  he handled the COVID-19 pandemic. Suga’s administration has been rather controversial and contested for various reasons. For instance, he was known for dismissing questions from journalists and his poor communication skills at press conferences, while failing to connect with the Japanese public. Moreover, he was harshly criticized for his slow response to the COVID-19 pandemic, as he was reluctant to suspend the GoTravel campaign even amid increasing cases and was considered to be more focused on hosting the Olympics than seriously tackling the pandemic.

Although more than 80% of the Japanese population opposed the Olympics, he carried on with the preparations, attracting backlash from the citizens he represented. Even the famous writer Haruki Murakami, criticised him for hosting the games in the difficult times the country was facing. Murakami articulated that Suga did not listen well to his people and “ sees only what he wants to see”. The words of the writer lined up with the general perception and Suga’s disinterest in the general public.

While throughout the Olympics numerous athletes and organizers tested positive, there was not a clear connection with the surge in cases among the general Japanese population. Also the end of the games attracted criticism due to the “subdued” style of the closing ceremony. Whilst Japan obtained revenues from broadcasting the Olympics, the country was left with a debt of 15bn USD – double of what was expected and no influx of tourism to compensate for it. It was in this turbulent situation that Suga’s popularity fell dramatically, to the point where he decided to step down.

Suga stepping down meant for the LDP the election of a new party leader and thus Prime Minister for Japan. Having no clear frontrunner, the party had the option of choosing between the following four candidates.

Taro Kono (58) supervised Japan’s successful vaccination rollout, is known to be an avid user of social media, and the most active Japanese politician on the Internet. He is openly speaking out against nuclear energy and in favour of boosting renewable energy usage in Japan. Having studied abroad he is also fluent in English. Fumio Kishida (64) is a former foreign minister, maintaining a strong stance against China. Unlike Kono, he is pro-nuclear energy, while he also advocates for a better domestic response to the coronavirus. Sanae Takaichi (60) is a member of the most conservative wing of the LDP. She advocates increasing defence spending and has an even stronger stance against China than Kishida. She envisages strengthening the Japanese economy and has a pro-nuclear stance. Takaichi is also known for visiting the highly controversial Yasukuni Shrine, where Japanese war criminals are enshrined. Last but not least, Seiko Noda (61) advocates for women empowerment and is set to address the problem of declining birth-rates and ageing of the Japanese population.

​​On 29 September 2021 it was confirmed that Fumio Kishida, former foreign minister of Japan had won the LDP’s leadership battle. 5 days later, Kishida became Japan’s 100th prime minister, succeeding Yoshihide Suga after his 12-month term. Despite being a junior politician from LDP’s younger generation, Kishida is no beginner to Japanese politics. Since 2007, he has been appointed to various roles in the cabinet of Shinzo Abe and Yasuko Fukada, and from 2012 to 2017 he served as minister of foreign affairs.

Members of the LDP picked a safe and moderate choice to tackle big problems facing the country, from public debt to the consequences of Japan’s ageing population. After taking Office on 4 October, Kishida delivered his first policy speech pledging a “new capitalism” that would not leave the middle class behind. Former prime minister Shinzo Abe’s “Abenomics” are depicted by many as “welfare for the wealthy”, with the LDP now seeking to distance itself from that legacy. Kishida promised to address income disparities and the marginalization of low socio-economic factors caused by the infamous Abenomics and exacerbated by the COVID-19 pandemic, mainly to be tackled through wealth redistribution. Specifically, Kishida is planning on raising wages for public health and medical workers, while cutting corporate taxes in order to incentivize pay raises. The new prime minister will certainly face a challenging task given Japan’s public debt to GDP ratio is 260%. Already, Kishida has shelved his plan to adjust taxes on capital gains and dividends, reflecting his concern about jolting the stock markets.

On climate change, Fumio Kishida appears less committed than his predecessor. The former prime minister made CO2 emissions reduction central to his policy, committing to a 46% cut by 2030 before achieving carbon neutrality by 2050. While acknowledging the 2050 goal in his opening speech, Kishida made no mention of Suga’s 2030 target. Additionally, he remarked “renewable energy is important, but our country is in the midst of a digitalization drive which will increase electricity demand”. Kishida seems to acknowledge the Japanese public’s worries about the effects that the goal on carbon neutrality will have on local economies and employment. Critics argue that without manufacturing workforce retraining for innovative technologies Japan will invariably lose  jobs as the rest of the world adopts new energy technologies. Hence, despite its unpopularity after the Fukushima disaster, the minister has emphasized the pressing need to restart nuclear plants.

Regarding security matters, the LDP’s manifesto calls for a sharp rise in defense spending. Against the backdrop of China’s military build-up and North Korea’s nuclear missile programmes, the LDP is eyeing to increase its defense budget from 1% of GDP to 2%. The manifesto also states the controversial welcome of Taiwan’s intention to join the Comprehensive and Progressive Agreement for the Trans-Pacific Partnership (CPTPP), after both China and Taiwan applied to enter the agreement in September. Aware that his voters will not accept a return to a dovish foreign policy, Kishida stressed the need to “acquire the capabilities to strike enemy missile bases to prevent attacks”. Nevertheless, the former foreign minister also made it clear Japan should maintain its good relations with China.

What do the Japanese think about Fumio?

Despite Covid19 levels being at an all-time low after August’s devastating wave, public broadcaster NHK’s opinion poll shows that the Japanese are not eagerly enthusiastic about their new prime minister. Kishida has a 49% approval rating, lower than the 70% Suga enjoyed at the start of his term. After Yoshihide Suga stepped down, the Nikkei Stock Average skyrocketed to 31-year high as investors were hopeful a focused reformer would succeed him. Instead, the LDP chose a consensus builder, a leader with little charisma that is accused of being Abe’s puppet for defending Abenomics’ stimulus policies. Unlike the more popular Taro Kono’s aim to pivot Japan to becoming a renewable energy and digital economy powerhouse, Kishida’s biggest bets are cutting corporate taxes and doubling down on nuclear energy. Investors shorting the Nikkei are reaping substantial profits as hope for change has returned to Suga’s levels.

Nevertheless, the popular support for Kishida is still much higher than that for Suga’s last term. Aware of the approval rates, Kishida showed his commitment to the position of PM saying: “regardless, I will reflect on my actions based on these results […] and continue to work hard toward the upcoming election”. On the same day, he unveiled his cabinet, dominated by Abe’s allies, and called for election on 31 October 2021. This news was unexpected, as elections were supposed to take place in November. Moreover, the date is considered to be inauspicious in Japanese culture but for Kishida it was “the sooner the better”. On 14 October 2021, he proceeded to dissolve the Parliament, heading straight to the election.

The Constitutional Democratic Party (CDP) is the LDP’s biggest opposition with 112 seats in the lower house. On minority rights and women’s empowerment the CDP stands for including same-sex marriage and different surnames for couples. The CDP and the Japanese Communist Party (JCP) (with 12 seats) are planning to cooperate in the election with only one candidate from either party in small districts to maximize their chances of winning seats. The low public support for Kishida combined with cooperation among the two main opposition parties could challenge the LDP’s maintenance of a strong two-thirds majority.

Implications for the EU

Along with the ROK, Singapore and Vietnam, Japan is one of the only countries in Asia that has a free trade agreement with the EU – the 2019 Economic Partnership Agreement. In its recently published Indo-Pacific strategy, the EU states its desire to strengthen semiconductor supply chains with Japan. Last May, both regions adopted a Green Alliance during the 27th EU-Japan virtual summit. The EU’s strategy also makes mention of formalizing digital partnership agreements as well as promoting secure flows of data.

Like his predecessors, Kishida will promote a “Free and Open Indo-Pacific” while counterbalancing China. Additionally, he stated that “as long as there is a threat to basic values of freedom, democracy and the rule of law and human rights, Japan will work with the US, the EU, India and Australia”.

Japan is certainly one of the EU’s most active and relevant partners in Asia. Despite this change in leadership, the strategic and economic relationship between the two regions is unlikely to suffer. Nevertheless, with the LDP’s almost sure loss of a strong majority we may witness a change in Japan’s foreign policy towards a more pacifist and cooperative one.