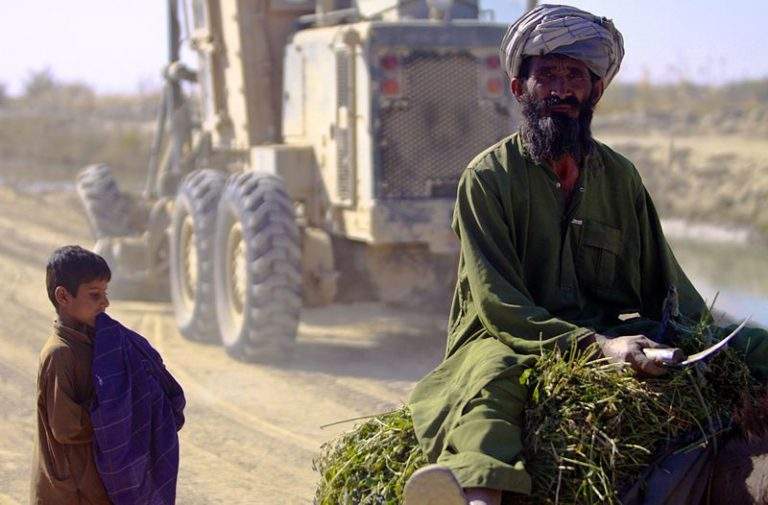 Since the withdrawal of US and NATO troops on 15 August 2021, a new interim Taliban-led government is now in power in Afghanistan, tasked with rebuilding the country after 20 years of internal conflicts. The flows of international aid and development assistance -which the country largely depended on for its advancement prior to 15 August- have been almost entirely disrupted. The World Bank, the IMF, the Asian Development Bank (ADB) and the EU decided to freeze budgeted project funding, payments to Afghanistan, Afghan-owned assets abroad, as well as official development assistance plans (ODA, or “government aid that promotes and specifically targets the economic development and welfare of developing countries” according to the OECD definition). The new phase of reconstruction and state re-building may hence be passed on to other regional actors, such as China, which some say has eyed new investment opportunities in the vacuum left by the declining influence of the US and the West in Afghanistan in exchange for political impartiality.

Afghanistan is among the poorest nations in the world. According to the UN 2020 Human Development Report on the country, data based on the last available estimation (2015-2016) shows that 55.9% of the Afghan population is multidimensionally poor. The United Nations Development Program (UNDP) defines multidimensional poverty as deprivation in health, education and standard of living. In Afghanistan, an additional 18.1% is classified as vulnerable to multidimensional poverty. The report also indicates that the gross national income (GNI) per capita decreased by roughly 10% in the last 30 years. At present, the Afghan economy does not produce enough revenue to provide even basic needs such as food or power for its citizens. In 2020, the country’s GDP reached 19.8 bn USD. As of 2019, the breakdown of Afghanistan’s international trade reflects the following: its exports rely largely on agricultural produce such as fruit and nuts, employing 44% of the total workforce, for a total value of  870 mln USD, while the imports amount to almost  8.6 bn USD. The potential for its future economic growth lies in the large, unexploited rare earth minerals, estimated to be worth  1-3 bn USD. In order to support the government in guaranteeing the basic needs of the society, the international community has thus far been willing to extend foreign aid and ODA as a form of contribution to the development of the country. According to a World Bank’s overview on Afghanistan’s economy, the country is shaped by fragility and aid dependence, as well as weak institutions and inadequate infrastructure. The country is in desperate need for foreign assistance in order to spur renewal and growth.

The EU has been among the largest contributors of ODA to Afghanistan, together with the US, the UK, Australia, Canada, Japan and Norway, making up about 80% of combined ODA flowing into the country. Between 2002 and 2020, the EU provided Afghanistan with over 5.1 bn EUR in development assistance, implementing a reconstruction plan with a focus on three priority sectors: peace, stability and democracy; sustainable growth and jobs; and basic social services.  Moreover, prior to the recent change of regime, the EU had budgeted  1.2 bn EUR for the period of 2021-2025 in strictly condition-based development assistance, which is now frozen until proof of solid guarantees and credible actions is offered ensuring reasonable conditions of human rights and fundamental values are met. According to the EU, such conditions were in line with the Afghanistan National Peace and Development Framework 2021-2025 (ANPDF II) drawn by the Ministry of Finance under the former Afghan government.

The EU decision to freeze development assistance stems from the ideological base underlying the approach of the so-called traditional donors to development and state-building. Accordingly, welfare, poverty alleviation and economic development can only be realized when the socio-institutional context of a country is built upon fundamental values as human rights and individual freedoms, adhering to principles such as the rule of law and respect for international obligations. In the case of Afghanistan, these ideological foundations are reflected in a document, undersigned by Western donors and representatives of the former Islamic Republic of Afghanistan and the Taliban. The Key elements for sustained international support to Peace and Development  in Afghanistan, presented at a side meeting of the 2020 Afghanistan Conference on “Peace, Prosperity and Self-Reliance” held in Geneva in November 2020.

Non-traditional donors’ approach, especially China’s, has long been based on different premises than traditional donors –no interference, no strings attached- when it comes to development assistance and state-building. Beijing’s position can be succinctly expressed with the words of Shanghai’s Fudan University expert on South Asia, Lin Minwang: “How you want to rule your country is largely your own business, just don’t let that affect China”. China’s willingness to engage with governments of diverse political or ideological leanings is no novelty. Anticipating the course of events, on 28 July 2021, Foreign Minister Wang Yi received Taliban political commission representative Mullah Abdul Ghani Baradar in an official meeting, during which the Taliban expressed their hopes for China to “play a bigger role in the future reconstruction and economic development [in Afghanistan]”. In return, Wang Yi said China would impose no conditions in exchange for  helping the people of Afghanistan, and stressed that China supports an “Afghan-led, Afghan-owned” development process. For both this is a do ut des (give-and-take) situation. Political and ideological neutrality and support for reconstruction in exchange of security guarantees against terrorist activities (specifically of the East Turkestan Islamic Movement) across the shared border. At a ministerial meeting among Afghanistan’s neighboring countries held on 8 September 2021, China declared its willingness to coordinate and cooperate with Afghanistan’s neighbors on the country’s stability and reconstruction process. This includes providing assistance in support of reconstruction and economic development, “when security and other conditions are available”, Wang Yi said.

China’s foreign aid and official development assistance to Afghanistan has so far played a minor role compared to other donors, with most of the Chinese activities in the country undertaken by private companies. As of 2020, project contracts of Chinese private companies in Afghanistan amounted to 110 million USD, with a year-on-year increase of 158.7%. Most of the investments were focused on infrastructure development. Among them, two large projects –the Mes Aynak copper mine and the Amy Darya oil field- are in fact stalled due to various impediments. Zhou Bo, senior colonel of China’s People’s Liberation Army, commented that Afghanistan offers “what China most prizes: opportunities in infrastructure and industry building”.

Since the West stepped back and big national and international companies have fled from the country, funds and assets dedicated to Afghanistan have been suspended indefinitely -including infrastructure projects that could be vital to favor the country’s future development. Yet Chinese  businesses have soon expressed their interests in investing in the country, advancing proposals and ideas for the reconstruction of the war-torn country. Some Chinese media reported that Chinese investors have got in touch with China Town in Kabul -a large complex of Chinese factories and trade offices- to assess future investment opportunities, especially in infrastructure construction and mining. China Town in Kabul has recently launched a project for the establishment of an Afghan Institute, an industry platform to investigate and promote investment opportunities.

On the one hand, there are good reasons to doubt that China may intend to invest, at least through its state-owned enterprises (SOEs), in such a hostile and unstable environment. Experts are mostly skeptical that innovative firms who could provide ad hoc solutions for the poorly connected territory would be eager to invest in the country as of yet. Raffaello Pantucci maintains that a real engagement of China in the reconstruction of Afghanistan will not be a strategic priority in the near future, despite Chinese companies tending to display a higher risk tolerance operating in volatile business environments. Concerns reflect mostly the current political instability and the threat of reprisals or hostile actions, and most importantly, the likelihood of international sanctions.

On the other hand, some experts also believe that connecting Afghanistan to the BRI routes could favor a shorter access for China to the markets in the Middle East as well as shortcuts for the imports of oil and gas from the region. Projects such as the extension of the China-Pakistan Economic Corridor routes with the Peshawar-to-Kabul motorway or the continuation of a direct road –already under construction- connecting China to Kabul via the Wakhan corridor, could be crucial to such a strategy.

The implications of the stance taken by international financial institutions and global actors such as the EU on the Taliban government is going to have a strong impact on the development opportunities of post-US Afghanistan. The predicament of the country’s economy and its dependency on ODA flows has in fact impaired the Afghan-led, Afghan-owned development process advocated by traditional donors. For its part, the West aims to send a clear message to the Taliban and other authoritarian leaders of the world – that it will not tolerate a global reversal towards a diminishing role of fundamental freedoms and human rights for development. However, lessons learned on the socio-economic consequences of sanctions on the government of a similarly resource-rich Asian country –Iran- should have taught the EU and the West to work out different solutions in order to ‘avert humanitarian and socio-economic collapse’ in Afghanistan, too.

At the recent extraordinary G20 meeting held in Rome on 12 October 2021, the EU leaders announced to donate a total of 1 bn EUR in humanitarian aid including aid for vaccines, housing, human rights protection, and support to Afghan neighboring countries in managing migration and counter-terrorism activities. The inflow of such resources will depend on whether the Taliban grant a safe entry of foreign personnel into the country, while development projects sponsored by the West remain stalled and ODA frozen.

On a rather lighter note, China has stressed its non-interference policy -thus securing Taliban collaboration to control terrorist activities of the East Turkestan Islamist Movementand- and encouraged the Taliban government to promote more inclusiveness. This way, Chinese investors may enjoy a safer, facilitated access to the investment opportunities linked to the country’s future reconstruction needs. Beijing also promised help in fostering cooperation and coordination for Afghanistan’s reconstruction. Yet, while placing a strong emphasis on its support for multilateralism at the international level, it might be fairer to argue that what China really aims for is strengthening regional multilateralism and consensus on support to Afghanistan. Xi Jinping not personally joining the extraordinary G20 on Afghanistan might signify that China’s intention is to cooperate on its own terms. Beijing is expected to participate in the new round of Moscow Format talks on Afghanistan, scheduled for 20 October 2021.