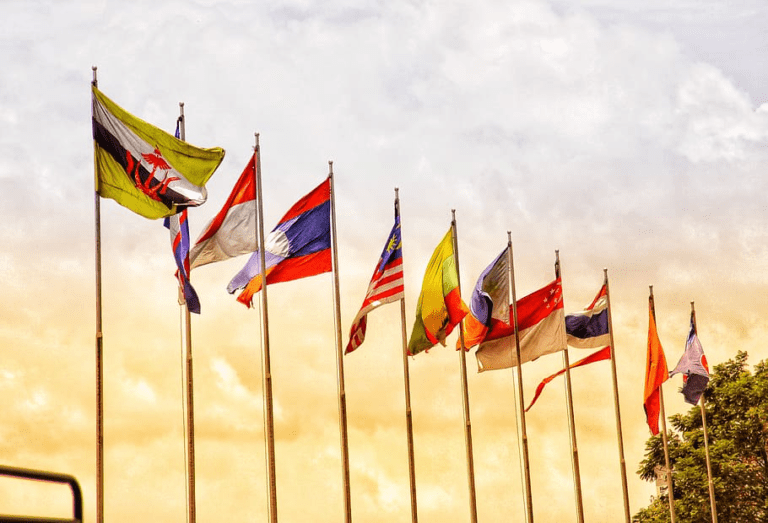 Since its signing in November 2020, The Regional Comprehensive Economic Partnership (RCEP) has been hailed as a “victory of multilateralism and free trade”. Upon ratification, it is set to become the world’s largest preferential trade agreement (PTA), covering a region that accounts for 50% of the world’s population, 30% of the global GDP, and 25% of global exports. Expected positive economic outcomes of RCEP include offsetting the losses incurred by the US-China trade war and increasing the global GDP by 186 billion USD annually by 2030. RCEP could prove to be of great importance in the wake of deteriorating trans-Pacific trade relations and the COVID-19 pandemic. Politically, the PTA is significant as it promotes “mega-regionalism ” in a region historically marked by a politically tense climate.

The deal has not been met without skepticism. RCEP is a target for numerous critics doubting the real impact such free and unregulated economic integration may have on the general population. Compared to the Comprehensive and Progressive Agreement for Trans-Pacific Partnership (CPTPP), RCEP contains no provisions on state-owned enterprises, the environment, or labour standards. Labour unions in East Asia have been particularly vociferous about their concerns towards the agreement, given that 15 RCEP members are ranked as the ‘world’s worst countries for workers’.

In early September 2021, Beijing held a virtual summit with RCEP signatories to ensure the agreement comes into force by 1 January 2022. China’s Vice Commerce Minister, Ren Hongbin, called for “faster ratification” in a China-ASEAN meeting, showing signs Beijing is growing impatient to take a leading role in trade with ASEAN through RCEP.

In light of the recently published EU strategy for cooperation in the Indo-Pacific, which intends to increase its engagement in the region and reinforce a ‘rules-based international order’, the

EU should take the absence of these basic provisions as an indication that European standards and norms are not as much part of RCEP members’ agenda as the EU would like. What follows is an assessment of RCEP, analyzing the economic and ethical implications for signatory countries as well as the EU.

RCEP and how it all started

PTAs have grown in popularity over the last two decades, becoming the most common mechanism for liberalizing trade in goods and services around the world. The European Union, the North American Free Trade Agreement (NAFTA), and the Southern African Customs Union are all examples of trading blocs. Aside from the Association of Southeast Asian Nations (ASEAN), East Asia’s economic landscape is currently populated by a “noodle bowl” of bilateral trade agreements between countries, as it remains one of the few regions in the world without a functioning multilateral trade agreement.

On 15 September 2021 Cambodia became the fifth country to ratify RCEP, following China, Japan, Singapore, and Thailand. The agreement will take effect 60 days after it has been ratified by at least six ASEAN member countries and three non-ASEAN signatories. As a result, RCEP needs at least three more ratifying ASEAN countries, as well as one non-ASEAN country in order to come into effect. An initial deadline was set for national legislatures to ratify the agreement by November 1st. However, in light of the Covid-19 resurgence, expectations are now set for the agreement to come into effect in the first half of 2022 earliest. If ratified, RCEP will integrate trade flows and global and regional value chains operating in the region. The pact aims to liberalize trade as well as investment in the region by lowering tariffs by 92% and implementing new rules on government procurement, competition policy, and e-commerce. This would also be the first PTA to bring together China, Japan, and South Korea, three of Asia’s four major economies, notorious for their political disputes. The trade agreement is highly significant due to its specification for rules of origin (ROOs), as present bilateral agreements among RCEP countries imply differing rules of origin for commodities and materials. For example, depending on the destination country, a table made in an ASEAN country is required to meet different standards (e.g. material, suppliers). RCEP would enable commodities to unify various origin rules into a single set of RCEP criteria. As a result, the PTA is expected to boost intra-regional FDI flows and strengthen the value chain among its signatories.

First and foremost, they insist that all members adhere to the core International Labour Organization (ILO) conventions. The Freedom of Association and Protection of the Right to Organize Convention has yet to be ratified by five RCEP countries: China, Laos, Malaysia, Singapore, Thailand, and Vietnam. Brunei, Japan, Malaysia, Myanmar, and Singapore are among the countries that have yet to ratify the Discrimination (Employment and Occupation) Convention. The Abolition of Forced Labour Convention is lacking Brunei, China, Japan, South Korea, Laos, and Myanmar from its list of ratifiers.

The unions’ second demand is for the Investor-State Dispute Settlement (ISDS) mechanism to be omitted from the agreement’s texts, claiming that it infringes on state sovereignty by potentially bypassing democratically established domestic legislation. ISDS is a system through which investors can sue countries for discriminatory practices concerning foreign direct investment. It was later repealed from RCEP in November 2019, but the option of reactivation still exists three years after its signing.

Third, the unions want public procurement and public service to be exempted so that ASEAN governments can implement industrial policies that are appropriate for each country’s stage of development, protecting jobs and local industries. Government procurement was not originally included in the mission, but was later added during discussions. Notably, this is the first time ASEAN has included government provisioning rules.

Next, the unions ask for official RCEP texts to be made public and available to all relevant parties for public examination. Since 2013, negotiations on the deal have been conducted behind closed doors. Following the conclusion of negotiations in November 2020, the document was made public and subjected to a legal review and verification process. However, this simply means that governments have the option of reviewing the content before ratifying it.

The fifth and final demand calls on signatory countries to conduct a human rights impact assessment of the RCEP’s impact on employment, SMEs, digital infrastructure, and the right to medicine and seeds.

Some economic simulations predict that the effect on RCEP members’ GDP will be marginal, with only a 0.3% gain beginning in 2030. The accord will mostly benefit China, Japan, and South Korea as they are the only countries not jointly members of any existing free trade area. Furthermore, advanced manufacturing will profit the most, further benefiting the CJK (China Japan Korea) bloc. The majority of the remaining signatories have already reached deals with other signatories and/or have committed to greater trade liberalization through the CPTPP.

RCEP is pushing for the accession of the 1991 Act of the International Convention for the Protection of New Varieties of Plants (1991 UPOV), which will be especially harmful to subsistence farmers. This act gives plant breeder businesses monopolistic rights, making it illegal for farmers to save seeds (the practice of saving and exchanging non-GMO seeds, accounting for 80-90% of all seeds used in Asia), consequently driving up seed prices. There are concerns that RCEP may promote land transfers from rural communities (who are currently suffering from the COVID-19 pandemic) to corporations, further degrading natural resources. RCEP encourages foreign investment in critical services such as health, education, water, electricity, telecommunications, and financial services while limiting government regulation. As a result, dealing with future crises and pandemics is becoming increasingly challenging for authorities. India’s decision to leave RCEP in 2019 was largely based on the agreement’s negative impact on the country’s agriculture and dairy sectors, which have traditionally been protected by tariffs.

Why RCEP matters to the EU

Trade facilitation and reduction of trade costs among RCEP members might lead to a decline in competitiveness of European products as a result of trade diversion. However, European firms might benefit from closer integration thus offsetting potential losses. Multinationals will be more interested in diversifying their supply chains in RCEP nations, and European companies can profit in the long run from more resilient supply chains, lower transaction costs, and easier exporting to RCEP countries. Because of RCEP, Europe is predicted to profit from a 13 billion USD rise in annual net income starting from 2030.

On 16 October 2021 the EU released its strategy for cooperation in the Indo-Pacific. The first listed principle of engagement is to “Solidify and defend the rules-based international order, by promoting inclusive and effective multilateral cooperation based on shared values and principles, including a commitment to respecting democracy, human rights and the rule of law”. Engagement with Indo-Pacific partners has a number of goals, including achieving the Sustainable Development Goals (SDGs) and meeting the objectives of the Paris Climate Agreement. In terms of labour, the EU makes concessions in order to promote decent work and the ILO’s international labour standards. Additionally, the EU has committed to using a variety of mechanisms to safeguard human rights and democracy, including political and human rights debates and discussions, as well as “restrictive measures and sanctions” against human rights violators. As previously stated, many RCEP nations have yet to ratify key ILO conventions. Furthermore, according to the 2020 International Trade Union Confederation (ITUC) Global Rights Index Cambodia, Indonesia, the Philippines, South Korea, and Thailand were not able to guarantee basic human rights to their citizens.

Clearly, there is a disconnect between the EU’s human rights principles, its self-proclaimed role as democracy norm setter, and its flexibility in trading with nations violating those criteria. However, practically, there are limits to how ready EU trading partners can be to embrace the EU’s social and environmental protection requirements. Furthermore, the EU will have to wait and see how China engages strategically in the future growth of RCEP, as well as how Japan and South Korea wield power inside the framework. EU Trade agreements exist with South Korea, Japan, Vietnam, and Singapore, which might help the bloc to develop trade rules and laws, as well as create responsible and resilient value chains. Instruments such as the Generalized Scheme of Preference (GSP) and the Everything But Arms (EBA) programs remove import levies from products entering the EU, assisting the economic development of various Indo-Pacific countries. Developing RCEP countries such as the Philippines, Indonesia, Vietnam, Cambodia, Myanmar, and Bangladesh benefit from this strategy by creating jobs based on international labour and human rights standards.

RCEP was drafted before the COVID-19 pandemic disrupted the global economy. Developing countries are short of the financing required to alleviate poverty and hunger by 2030 (SDGs no. 1 and 2), as stipulated in the UN’s SDG agenda. Implementing RCEP at this time will make poorer South-East Asian countries and their workers even more vulnerable, as their trade balance will be severely impacted. Reducing government control in areas like health will exacerbate the crisis even further. It is therefore in the interest of potential ratifiers to open up the possibility to amend the agreement and ensure the power to combat the pandemic and inoculating the population remains in public hands.

Despite the EU’s commitment to democratic values and human rights, RCEP should not pose any legal issues for any present or future trade deals between the EU’s ethical clauses and RCEP members. Nonetheless, promoting and advocating for long-term, “rules-based trade and growth” via initiatives such as the GSP, will benefit European businesses as well as the EU’s capacity to maintain smooth relations with its partners in the Indo-Pacific.