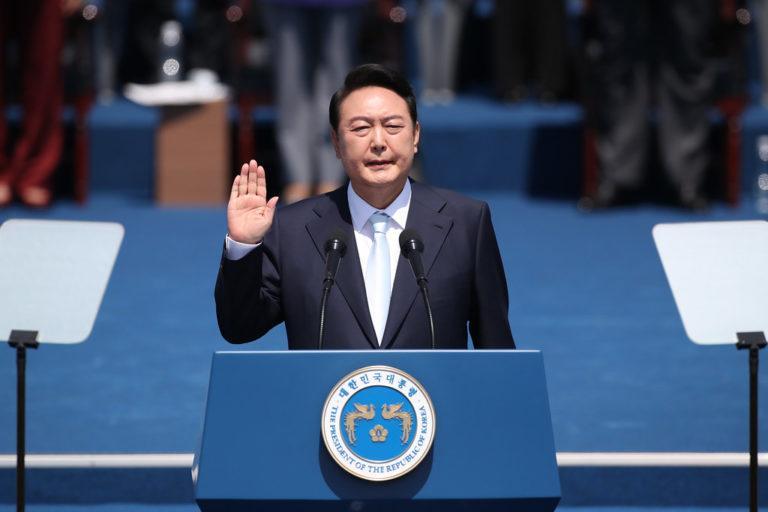 On 10 May 2022, former prosecutor-general Yoon Suk-yeol began his 5-year term as the new President of the Republic of Korea. Since his election, Yoon Suk-yeol has wasted no time outlining his foreign and national security policy. Although he has no previous policy or governance experience, the new President is set to make some significant changes to South Korea’s foreign policy. But how does the EU fit in Yoon’s new external engagement scheme?

Yoon’s new foreign policy outlines a more combative approach toward North Korea as well as a tougher stance on China. He has also signaled his determination to bolster South Korea’s alliance with Washington, seeking to strengthen South Korea’s military capabilities so as to “completely deter any provocation” from Pyongyang. According to news reports, Yoon has already dispatched delegates to discuss issues surrounding nuclear weapons as well as long-range missiles and other military weaponry with US national security advisor Jake Sullivan.

On 5 May  2022 Yoon announced his 110 National tasks. These tasks include undoing President Moon’s plan to phase out nuclear energy, cut real estate tax and improve welfare for soldiers. Their implementation will cost the new government an estimated 209 trillion won (158 billion EUR) over the next 5 years. The highlighted foreign policy and security tasks are primarily focused on North Korea and the “complete and verifiable” denuclearization of the rogue state, as well as to bolster their nuclear capabilities as a deterrent to any aggression from North Korea. President Yoon signaled his intentions to normalize inter-Korean relations and strengthen the military alliance with the US. In addition, the US and the EU have been highlighted as part of the new President’s goal to strengthen cooperation as part of the South’s overall technology strategy. According to Yoon, his government will focus on joint research and development of technology such as AI and semiconductors, as well as recruiting and nurturing talent within the technology sector. Within the 105 tasks, there is mention of promoting international joint research, attracting talent to the global technological infrastructure. Given that EU-Korea trade focuses primarily on technology and luxury consumer goods, the emphasis is expected to be placed on such commodities.

In his inauguration speech, Yoon promised to rebuild South Korea’s “great nation” and to roll out a plan tackling a number of pressing domestic issues, including increasing unemployment rates and slowing economic growth. Moreover, he  has set “social mobility”, scientific development and technological advancement as his key priorities for revitalizing the economy. Until his inauguration Yoon had not detailed his re-engagement or economic plan for the North. However, in February 2022, his national security adviser, Kim Sung-han, told Reuters that his team would devise a plan offering Pyongyang sanction relief or economic aid in exchange for denuclearization. A proposal not welcomed very warmly by the North, which has responded by testing its weaponry at an alarming rate.

Yoon Suk-yeol seems to be setting the tone for a no-nonsense approach towards North Korea as he calls for  the complete denuclearization of the rogue state.  He has declared North Korea’s nuclear weapons program a “threat” to peace in the region, while also leaving the door to dialogue and peaceful resolution open. Thereby aiming to improve the lives of the North Korean people in return for the North’s denuclearization.  In addition, he is quickly seeking to strengthen his country’s ties with Washington, highlighted by his first summit with US President Joe Biden which took place on 21 May 2022, discussing the issue of strategic weapons just 11 days after Yoon’s Presidential inauguration. Nevertheless, given Yoon’s interest in building closer relations with Washington, it remains difficult to predict how relations with North Korea will unfold during the new President’s turn in office.

Yoon’s foreign and security policy brief suggests that South Korea is set to focus on its relationship with America and Japan first and the EU second. Although his electoral campaign did not particularly emphasize foreign policy issues, President Yoon has pledged to make South Korea a more prominent player in global politics. Yoon has underlined that the EU and South Korea are key strategic partners who share similar interests and values.

The EU sees South Korea as one of its most valued partners in Asia and the Indo-Pacific. This is largely due to the long-standing agreements between them, such as their bilateral free trade agreement (FTA) (2010), the EU-South Korea framework agreement (2010) as well as the crisis management participation agreement (CMPA) (2014), all of which has allowed the EU and South Korea to build a strong legal foundation which promotes bilateral cooperation. Currently South Korea is the only country in Asia that has signed fundamental agreements with the EU covering politics, economics, and security cooperation. This exemplifies the value both the EU and South Korea attach to their bilateral relations.

Europe and South Korea’s coordination on international matters has often taken a back seat to their alliances with the United States. Both sides usually choose to follow the lead of the more powerful nation. However, President Yoon and his team appear interested in formulating a deeper relationship with the EU. Stronger cooperation between the EU and South Korea could boost their strategic value to Washington and Beijing. A closer relationship between the EU and South Korea could help act as a balance in the increasingly intense rivalry between Beijing and Washington. “Cooperation between Seoul and Brussels can help mitigate the most negative effects of Sino-American competition and ensure that the United States does not turn on its allies but rather cooperates with them,” Issues of trade and economics such as South Korea’s bid to join the Digital Economy Partnership Agreement (DEPA) and the Comprehensive and Progressive Agreement for Trans-Pacific Partnership (CPTPP) should also be high on the list of priorities for EU-ROK relations as this will create the need to update the current free trade agreements to avoid any negative effects to the trade relationship between South Korean and European companies if unaddressed.

In an effort to strengthen strategic cooperation President Yoon sent a delegation of special envoys to the EU. This was one of the first contingents sent by the new President, after those to the US and Japan. The special envoy Kim Gi-hyeon led a seven member mission to the EU from 5-11 June 2022. The delegation visited Brussels and Strasbourg as well as Paris (promoting Busan’s bid for the 2030 expo), where the main topics discussed were climate change, semiconductors and digital transformation.

The EU is seeking to increase its ties with economies in Asia as it reassesses its economic relations with China, seeks to diversify its trade dependencies, and increases its involvement in the Indo-Pacific region. The EU is also diminishing its reliance on commodities from Russia particularly for crude oil and due to the war in Ukraine. The crisis in Ukraine has brought the EU’s relationship with the Republic of Korea and Japan to the forefront, as they were among the few Asian nations that issued sanctions against Russia. Greater economic cooperation between the EU and Korea might already be underway with reports that South Korea is set to provide five carriers’ worth of liquefied natural gas to Europe as the EU looks at how to cut its dependency on Russian gas amid the looming energy crisis.

How the relationship between South Korea and the EU will play out remains uncertain. As President Yoon takes charge, he seeks to strengthen ties with the US and Japan. Yet, South Korea relies on the US for security but on China for its economy, meaning against the backdrop of the US-China power struggle, stronger EU-South Korea ties are surely on the cards.