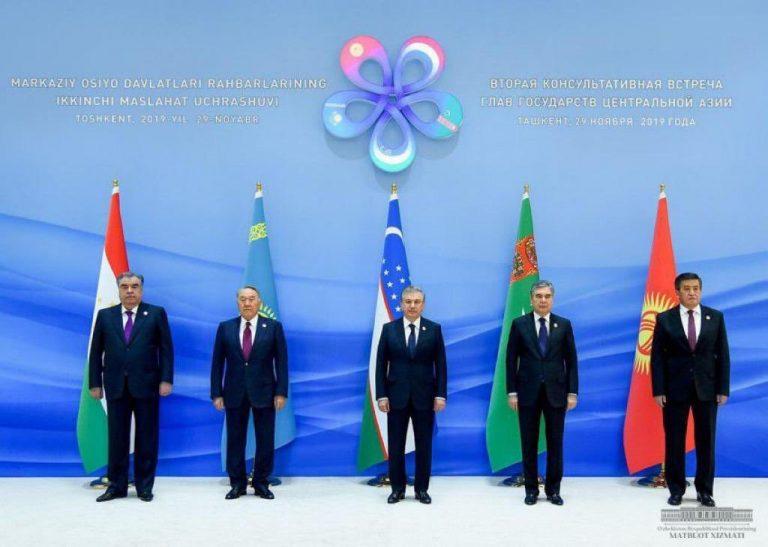 The leaders of the five Central Asian republics met in Tashkent on 29 November for a historic summit. This is the second annual meeting of the heads of state after the first was held in Kazakhstan in March 2018. Uzbekistan President Shavkat Mirziyoyev is credited with providing the initiative for a formalised annual meeting of the Central Asian leaders. Friday’s summit was Uzbekistan’s first chance to host the event and was attended by President Gurbanguly Berdymukhamedov of Turkmenistan, President Emomali Rahmon of Tajikistan, President Sooronbay Jeenbekov of Kyrgyzstan and former President, now, Elbasy (Leader of the Nation) of Kazakhstan, Nursultan Nazarbayev.

Emphasis on the shared cultural heritage of the five nations was once again a key topic in multilateral discussions. President Mirziyoyev put forward the idea of establishing a ‘Central Asian Prize’ open to nationals from all the five republics that would be awarded for outstanding achievements in science, culture and art. Cultivating a strong regional identity alongside citizen’s national identities is an important step in the process of enhancing regional cooperation. These initiatives along with President Mirziyoyev’s suggestions for university forums and more regional sporting events are simple but effective methods of building this Central Asian identity which draw focus to the often overlooked, but nevertheless significant historical, linguistic, religious and political heritage shared by the five nations.

Notable during the consultative meeting was the prominence of climate change issues in the discussion between the five leaders. Renewable energy sources were a particular focus of attention as the leaders recognised the enormous potential for regional cooperation and investment in their development and how this will simultaneously benefit economic and energy mix diversification. President Mirziyoyev expressed his country’s readiness to explore joint infrastructure projects with regional partners, with a focus on renewable energy, a shrewd move considering the region’s strong endowment of hydropower, solar and wind potential. Such statements are encouraging signs of progress in regional relations and are especially important in the context of the worldwide climate emergency from which Central Asia is far from immune. The pressing need for comprehensive measures to tackle desertification and water issues was stressed at the meeting. President Jeenbekov highlighted the issue of melting glaciers in the Kyrgyz mountains and the negative impact this is having on river levels across the region. Jeenbekov stated that 45% of regional natural water resources have their springs in the country and warned of the adverse effects lack of action will have. Not so long ago, water was a major source of tension, mistrust, and threats of war in the region. The momentum is with Central Asia and these issues present an opportunity for the region to show the world just how effective regional cooperation can be when differences are put aside for the common good.  Collaboration on environmental matters is certainly welcomed by Central Asia’s partners, including the EU. The New EU Central Asia Strategy indeed devotes a substantial section to this subject.

Afghanistan was also high on the agenda at Friday’s consultative meeting. The restive nation borders three of the five Central Asian republics and has been a cause of concern for many years, particularly in issues of security and border management. President Mirziyoyev articulated the importance of Afghanistan in a succinct manner, stating: “An integral part of our region is Afghanistan. It is in our common interest to help this country firmly embark on the path of peace and development”. Mirziyoyev went on to advocate for a more active role for Afghanistan in regional trade and economic relations. Extending the hand of international friendship by inviting Afghanistan as observers to future consultative meetings of the heads of state and other regional summits would be a warm gesture and help pave the way for a new chapter in Afghanistan’s and indeed, Central Asia’s history. This could prove to be especially effective considering that the SAARC, the regional grouping to which Afghanistan belongs, is marred by inefficiency.

Central Asia is rapidly becoming a more interconnected arena and removing obstacles that thwart the flow of goods, services and capital is an increasingly important endeavour. Elbasy Nazarbayev was keen to stress this point. In the age of connectivity, regional cooperation is of the essence for Central Asia to fully reap the benefits of increased trade and investment flows and become better integrated in global supply chains. All countries are seeking to modernise and diversify their economies beyond reliance on natural commodities to more value added sectors, and this will require an international exchange of best practices. Further, a joint approach to the management of trade, energy, and transportation corridors, a simplification of border crossing and customs procedures, and more generally the harmonisation of logistics and trade regulations and infrastructure standards is particularly relevant for the landlocked Central Asian countries, which typically face higher trading costs than countries with open sea access.

Sustained dialogue at the highest levels of leadership will be critical to steer the future of regional cooperation in Central Asia forward.  By the same token, the serious threats facing the region must be met with a combined effort. As such, it is a reassuring sign that the leaders adopted a joint statement this Friday agreeing to meet again in Kyrgyzstan in 2020. In the near future, the declarations of good intent which are collected in the joint statement will also need to be translated into a roadmap of activities with concrete deliverables and practicable actions. A greater frequency of meetings at the technical and ministerial levels will be required to implement these.

Since the first consultative meeting of Central Asian leaders, discussions in the scholarly and expert community have focused on the institutionalisation of the emerging regional cooperation (often wrongly using the term “integration”, for which there is little appetite in the region at the moment), looking in particular to the relevance of other cooperation structures such as ASEAN and the Nordic Council. Some commentators have questioned how the different patterns of membership in international organisation of the five countries will affect their cooperation (some countries are WTO members, others are not; some are EEU members, others are not; in addition to Turkmenistan’s status of ‘permanent neutrality’). Looking at the Nordic Council, for example, in which some members belong to NATO, and others to the EU, shows that divergent patterns of membership in various regional organisations should be no hindrance to regional cooperation between like-minded states with deep historical, political and cultural links.

In short, the region finds itself at a period in time in which it possesses the necessary requirements to bring cooperation to the next level. In the early years of independence, the Central Asian countries faced enormous domestic challenges and their policies were mostly inward-looking. Now, as they consolidate their post-independence institutions, and following peaceful and stable leadership transitions in several countries, they are ready to  adopt a more regional approach to tackling common challenges, and develop mechanisms of cooperation that reflect and suit the needs and aspirations of their peoples.