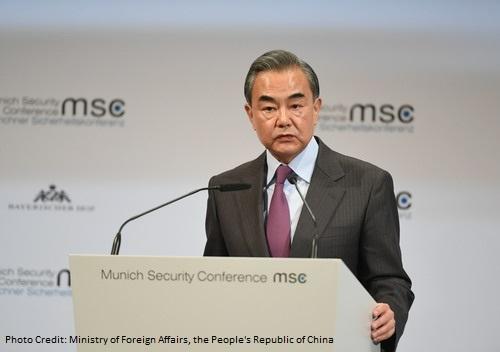 To interfere or not to interfere, that is the question

The principle of non-interference in the domestic affairs of other countries (不干涉原则 bù gānshè yuánzé) represents a cornerstone, as well as a source of great ambiguity, in China’s foreign policy. The importance of the principle was recently reiterated by the country’s State Councillor and Foreign Minister Wang Yi at the 56th Munich Security Conference in February 2020, and earlier at the General Debate of the 74th Session of the United Nations in September 2019. He reaffirmed China is committed to the principles of sovereign equality and non-interference in other country’s internal affairs and does not aim at hegemony or expansion.

As one of the Five Principles of Peaceful Coexistence, the principle of non-interference was first advocated in 1954 by the first Premier of the People’s Republic of China (PRC) Zhou Enlai in an agreement on “Trade between the Tibet Region of China and India”. Along with “mutual respect for each other’s territorial integrity and sovereignty”, “mutual non-aggression”, “equality and cooperation for mutual benefit” and “peaceful coexistence”, it was later included in the Ten Principles of the Declaration on the Promotion of World Peace and Cooperation at the Bandung Conference in 1955 and was adopted across the Global South by many states joining the Non-Aligned Movement as a pillar of their international relations.

At the time of its formulation, the principle was dictated not only by an ideological stand, but also by China’s inexperience and unreadiness to engage in conflict mediation efforts. Nowadays, it represents a pragmatic way to prevent external interference in the Chinese state’s/Communist Party of China (CPC)’s internal affairs. Yet, it is also a tool for expanding China’s soft power potential. For instance, China suggests it is not interested in exercising a normative influence, usually associated with Western powers, and rather promotes countries’ ownership of the solutions to their problems and approaches that respond to their specific characteristics and needs. China’s non-normative ideology advocates for an approach to conflict resolution and development that diverges from the traditional Western one and, in fact, acquires normative significance. As such, it has been a quite successful tool in shaping a positive attitude among both Global South’s elite groups and general public opinion.

However, in recent years China has also increasingly shown interest in preventing, managing or resolving conflicts. First, it has scaled up its participation to UN-led peacekeeping missions. While abstaining from voting on peacekeeping resolutions and limiting its financing of peacekeeping funds or personnel until the end of the 1990s, China gradually increased its contribution to the UN peacekeeping regime by deploying staff officers, military observers, engineers, medical staff, and logistics support in the 2000s. Today the country is a fully engaged player in UN peacekeeping and is the second-largest donor to peacekeeping budgets after the US, as well as one of the greatest contributors of manpower. Secondly, China originally preferred to carry out mass evacuations of Chinese nationals from countries affected by conflict or natural disasters (10 between 2006 and 2011). The most representative example in this respect was the withdrawal of more than 36,000 Chinese from Libya in March 2011. Nonetheless, China has engaged in both bilateral and multilateral international mediation activities in countries like Afghanistan, Bangladesh, Iran, Syria and Yemen, among others, in the last ten years.

A primary reason for China’s increased participation in conflict mediation and peacekeeping has been individuated in the country’s international strategic and economic interests. As a result of the going out or going global policy, launched by Jiang Zemin in the late 1990s, and especially of the Belt and Road Initiative (BRI), launched by Xi Jinping in 2013, a growing number of Chinese companies have started their activities overseas and have been also involved in high-value, infrastructure and natural resource projects. Not only are these critical to China’s economic growth, they have also implied an increasing presence of Chinese citizens overseas, whose safety might be at stake. As their security is seen as a responsibility of the state, the success or failure in providing protection has a direct effect on China’s domestic public opinion. A second reason lies in the growing responsibilities China has to take on as a global power. The international community has on occasion pressured China to take action, as in the case of the conflict in Darfur. Yet, it is also in China’s interest to be internationally accepted as a responsible global actor.

Chinese efforts in the field of mediation should be welcomed by other international actors. As a result of its historically limited presence or limited interference, China is indeed considered a more impartial and convincing mediator compared to the United States or European states in various countries that are now included in the BRI, particularly in the Middle East and Africa. Surely, China’s and the EU’s approaches to mediation and security still differ in many aspects. The former aims mainly at the safeguarding of stability, while the latter focuses on promoting healthy political transition, accountability for war crimes and democracy. Yet, they should pursue their commitment to jointly contribute to international peace and stability through strengthened dialogue and cooperation.

What might provoke scepticism is the fact that, while incentives to intervene in conflicts to safeguard economic and security interests are not exclusive to China, China commits simultaneously to these interests – and the attempt to foster a positive image as a responsible actor – , as well as the non-interference guidelines, two seemingly incompatible elements to other international actors.

The absence of a clear and unanimous definition of the principle of non-interference in the literature, in fact, not only makes it difficult to assess if China is departing from it, it also gives its leaders flexibility and the opportunity to adapt its interpretation to new situations. For example, in multilateral UN-led contexts, as non-interference is a general principle under the UN Charter and as the resolutions of the United Nations Security Council (UNSC) have collective legitimacy, China’s participation is perceived not to be necessarily in conflict with the non-interference concept. In bilateral contexts, as the non-interference policy is linked to states’ national sovereignty and territorial integrity, mediation efforts are also not perceived as an infringement of the principle, when China obtains the consent of the legitimate host government and conducts high-profile negotiations with all parties involved. Besides, it has been observed that China usually simply encourages the parties in conflict to come to the negotiating table, without taking sides or imposing a designed solution.

Furthermore, there is no indication that China intentionally exploits its economic power to determine the outcome of negotiations, for example by promising rewards for successful reconciliation. However, on the one hand, it has been argued that countries’ hope to benefit from China’s economic expansion is per se an indirect incentive to seek stability, however not necessarily at the advantage of all parties involved. On the other hand, Chinese growing economic presence abroad cannot be expected not to have any effect on other countries’ societies and politics.

Although they might not be conflicting in China’s eyes, the question is, whether China will be successful in projecting a positive image at the same time as a proponent of the principle of non-interference and as a responsible global actor that uses its influence to settle conflicts and foster peace. China’s consistency and credibility depend not only on its ability to make the two compatible, but also on the way their coexistence is perceived by the international audience.