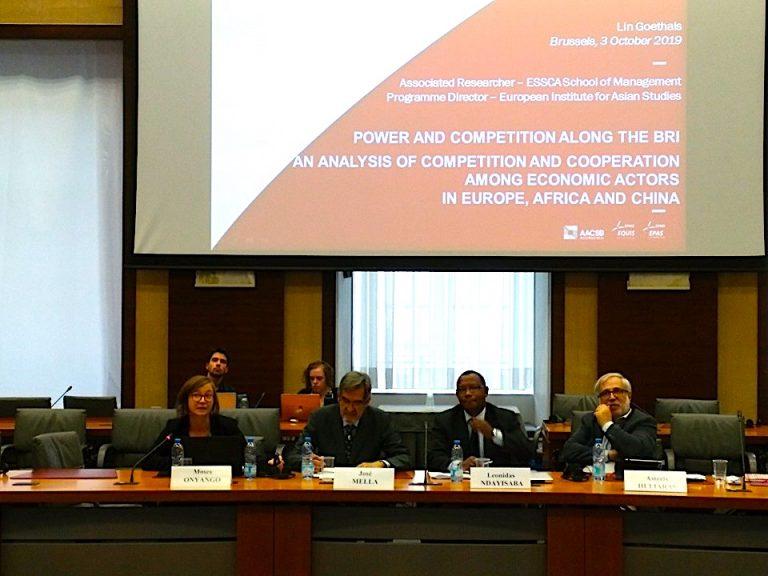 Thinking A New Approach Towards China: Lin Goethals’s Intervention At The EU-China-Africa Cooperation

On 3 and 4 October 2019, an event promoting EU-Africa-China Trialogue was held in Brussels. Organised by the Jean Monnet Network, the Egmont Royal Institute for International Relations, the Brussels Academy for China and European Studies and the University of Bradford, the conference was attended by participants from think tanks, universities and governments.

Divided in three panels, the speakers deliberated on the current status of the cooperation and integration between China, the EU and Africa, highlighting several initiatives currently on going, like the Jean Monnet Programme and the Belt and Road Initiative (BRI). Furthermore, the debate was focused also on the future developments of the partnerships between these actors through an assessment of the bilateral platforms of cooperation, like the Africa-EU summit (FOCAC) and the EU-China summit.

The European Institute for Asian Studies was represented at the event by its Director for Asia Ms Lin Goethals. In order to establish a solid and functioning trialogue between the EU, China and Africa, during her speech Ms Goethals  pointed out the necessity for China to further specify the nature and the purposes of its ongoing initiatives.
In fact, at the moment, the BRI seems to have no clear boundaries and, even though the initiative was originally proposed as an economic project, during the six years from its launch in 2013 many have questioned its real nature, pointing out that, beyond the economic format, the BRI might include political, social and security aims.

China is growing fast and its ambitions to become a leading global power are felt in different regions in the world, including in Europe, where the 17+1 grouping is raising growing concerns about potential  divisions it may create between the countries of the EU.
Therefore, it is necessary to learn to conceive the relationship with China in a different way, composed by both elements of competition and cooperation. In Africa, for example, it is important for the future to work in order to build an equal partnership with China, that is adapted to this new scenario.

An occasion to rethink and reshape the EU approach toward China in Africa will be next year, when the new European Commission will adopt a new EU-China Agenda to replace the current EU-China 2020 Strategic Agenda.