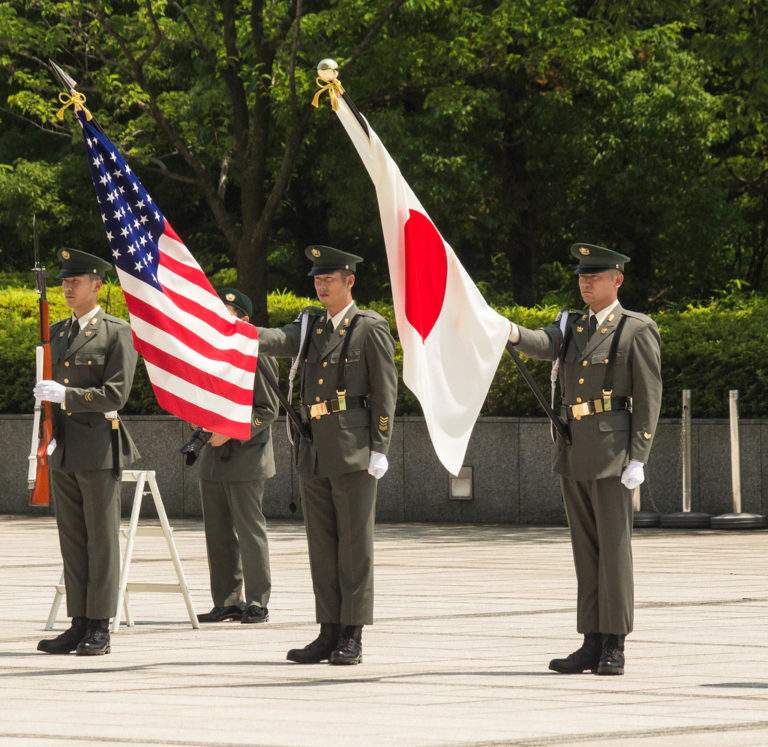 The US, the EU and Japan: Striking a new balance of power

Joe Biden, the new president of the United States, embodies a change of attitude in US foreign policy. The new administration has evoked mixed feelings in Europe and Japan. To some, Donald Trump´s strong stance on China was received as positive, while others have welcomed the return of stable diplomatic relations brought by Biden. It is clear that the new administration will face many challenges both at home and abroad, despite this, it has already set out the Indo-Pacific and the US-Japan alliance as a priority.

Within the context of Trump being an unreliable leader, the European Union has become an increasingly attractive partner for Japan. The Economic Partnership Agreement (EPA) and Strategic Partnership Agreement (SPA) were already major steps forwards in EU-Japan relations. Furthermore, some in Japan and many in the EU worry that Americans may elect another “Trump” in the near future, meaning that the EU-Japan relationship could remain a priority for both parties. On the other hand, now that the US has returned as a stable partner the EU-Japan relationship may develop with less urgency and priority.

The Trump administration adopted a realist approach to its foreign policy, seeking to maximize US power, putting America’s interests first and prioritizing bilateral relations over multilateral agreements. The administration rolled out a number of initiatives, including increased engagement in the Indian Ocean and Pacific Islands region, regional transparency and anti-corruption plans, as well as digital infrastructure and energy cooperation programs. However, Trump’s “America first” way of thinking undermined these initiatives. Most notably, during Trump’s presidency, Washington focused its attention in Asia on its trade war with China and maintaining the overall security in the South China sea. From a western point of view, the security of the region is important for the US because of China’s perceived potential challenge to the liberal rules-based order that America has promoted since the pacific war.

While, in principle, China’s containment is in line with Japanese interests, the Japan-US relationship has somewhat deteriorated under Trump’s republican rule. With the aim of getting a better trade deal between both partners, Trump pushed the alliance to its limits, threatening high tariffs on signature Japanese industries, such as car manufacturing. This resulted in a strengthened partnership between the EU and Japan. In May 2018, Brussels and Tokyo released a joint statement, warning that Trump’s threatened tariffs would have a major restrictive impact affecting a very substantial part of global trade. The withdrawal of the US from the TPP was also unsettling for Japan, since PM Shinzo Abe considered the agreement a critical component of his broader plan to reform Japan’s economy. Trump also demanded Japan to quadruple its share of the cost to host US military bases, threatening to withdraw troops altogether if the deal turned out to be unfavourable. Moreover, Trump did not support Japan against North Korea’s aggressive missile testing endeavours. Critics of Trump argue that his Asia policy has been a mixture of diplomatic withdrawal, showmanship against North Korea, and antagonistic trade practices with foes and allies alike. Yet, not all agree with this view. According to Derek Grossman, former adviser at the Pentagon, the US-Japan alliance remains the strongest in history. Proof of it are the routine joint military exercises on disputed waters. Moreover, Japan’s new Prime Minister, Yoshihide Suga has vowed to prioritize and enhance the alliance. To Grossman, this suggests that President Biden has inherited healthy alliances in the Pacific after all.

Trump’s Administration also revived the Quadrilateral Initiative (QUAD) — which involves the US, Japan, India and Australia — by holding its first ever stand-alone ministerial meeting in Tokyo, underscoring their collective resolve to jointly deal with Indo-pacific challenges, including security in the region. Furthermore, China’s rise which intimidates many Indo-Pacific states, gives Biden an entry point to repair and strengthen US alliances in the region.

President Biden will have to face many challenges at home as well. Nevertheless, he has pledged to reinvigorate the focus of America’s foreign policy in the Indo-Pacific. Appointing Kurt Campbell as Indo-Pacific coordinator was a first step, a position which has already been dubbed “Asian Czar”. Mr Campbell was one of the architects of the Obama administration’s “Pivot to Asia”. On his return to the US administration, Campbell has called for the spread of US forces across the Indo-Pacific, moving away from the current heavy tilt towards Japan, South Korea and Guam. Tokyo’s foreign minister, Toshimitsu Motegi, applauded Campbell’s appointment, suggesting some optimism for the future US-Japan relationship. Furthermore, according to Leif-Eric Easley, Professor of International Studies at Ewha Women’s University in Seoul, Campbell has vowed to address the growing tensions between South Korea and Japan, which had been previously ignored during the Trump administration, as to further develop the US’s alliance system. This illustrates the US´s will to return to the Pacific as a leader and mediator, something that Japan will certainly appreciate.

However, the revival of the US alliances might have come too late, as the  US’s soft power in the region has significantly weakened. This is a result of Trump’s “America first” approach, for instance his absence at gatherings with ASEAN and East Asia after 2017 set a difficult tone for healthy diplomatic relations. This loss of soft power was further exacerbated by Trump’s actions on his way out of office. By tightening the screws on China, he has effectively boxed in Biden by contacting officials in Taiwan, issuing bans on Chinese cotton and tomato products and openly condemning China on human right violations.  The economist even argued that the Trump administration set a booby trap for Biden: he either starts off on the wrong foot with China or he risks jeopardizing some of his support at home. The new administration seems to have opted for the former.

Suga and Biden are expected to reaffirm the importance of the Japan-U.S. alliance and American involvement in the Indo-Pacific during their first talks. Washington and Tokyo have begun preparing for US Secretary of State Antony Blinken and Defense Secretary Lloyd Austin to visit Japan as early as mid-March to meet their Japanese counterparts. Biden is also planning to host Japanese PM Suga at the White House in April, the first in-person foreign leader visit under his presidency, according to online news outlet Axios.  Furthermore, Japan hopes that the new administration will continue the US Indo-Pacific policy started under former President Donald Trump. Biden has clearly stated that he is keen to work with like-minded partners like Japan, South Korea and Australia, but also China, to pressure North Korea to denuclearize. A meeting between QUAD leaders is expected to take place in March 2021, showing the US´s will to have a strong presence in the region.

President Biden’s policy on Asia is expected to be a combination of Trumpian wariness of China and Obama’s preference for caution in handling strategic matters. Together with a strengthening of US alliances in the region and a spread of its forces throughout the Indo-Pacific. Japan can at least expect a return of stable, consistent and predictable relations with the US.

How does the EU fit into this picture?

In order to counterbalance some of China’s recent Foreign Policy decisions, strengthening the Transatlantic partnership between the US and the EU could prove very effective. Yet, Europeans will need to define their own Asia and Indo-Pacific strategy, thereby identifying areas of common interest with the US. Furthermore, The EU-US alliance as we have known it may be dead. A Biden administration will not be keen to bluntly “restore” the transatlantic partnership. It rather wishes to reinvent and upgrade it to be ready for today’s world, full of economic, climate, and health challenges, increasingly diffused power, rapid technological changes, greater insecurities, and intensified global competition.

Germany, planning to send a military vessel to the Indo-Pacific, is hoping for Japan, among others, to host the ship. By deepening Germany’s ties with the Suga administration, the Germans are reaffirming their interest in the Indo-Pacific. France and the UK are also increasing their naval activity in the region, which shows European initiative independent from the US.

After the US withdrawal from multilateral agreements under Trump, the EU became the new leader in innovative sectors such as green tech. Biden, however, embodies the return of the US to the multilateral table, which may be challenging the EU’s leadership position. As a result, the EU and the US may become more competitive in the future in contending for global green leadership.

A recent pan-European survey commissioned by the European Council found that one in every three Europeans believe that the United States can no longer be trusted despite assessing Joe Biden’s election as a positive outcome. Furthermore, the survey found that a majority of the population in key member states, such as Sweden, France or Spain, believe that the EU cannot rely just on the US to defend itself. Taking note of these changing public opinions, the EU would thus either have to become more autonomous by developing a European defence force or look for new allies, potentially spurring a heated debate. Japan is one of the most obvious alliance options for Europe. Tokyo, by building up its Self-Defence Force could not only prove to be an important economic partner, but also a strategic ally for the EU in the indo-pacific.

The EU-Japan Economic and Strategic Partnership agreements marked a major step forward in the development of their relationship. However, the SPA will not be fully implemented until 2035, therefore its actual impact is yet to be seen. However, it does provide both parties with an alternative partner to the US. Furthermore, the signing of the EU-Japan Partnership on Sustainable Connectivity and Quality Infrastructure embodies globalization outside the framework of China and the US. The conference, held in late September 2019, welcomed a wide range of guests from Europe and Asia, making China’s and America’s absence especially noticeable.

Overall, both Europe and Japan have welcomed the US’s leadership change. However, the reappearance of America as a reliable partner may suggest that the EU-Japan relationship will deepen with less urgency. On the one hand, Biden embodies the return of stable and predictable diplomatic relations, as well as the return of the US to the multilateral table. As a result, Japan could begin relying on its traditional ally once more, which could diminish the motivation to improve the EU-Japan relationship. On the other hand, the damage caused by Donald Trump to America’s alliances and soft power outreach will outlast his administration. Biden will have to work hard to regain the trust of the US’s partners. This includes Japan and the EU, offering opportunities to maintain EU-Japan relations as a highly listed priority.

US-Japan and EU-Japan partnerships are likely to carry on deepening. The former will for instance deepen through the QUAD initiative. The latter through the gradual implementation of the SPA. However, it is clear that all three parties would benefit from strong alliances and increased interdependence.