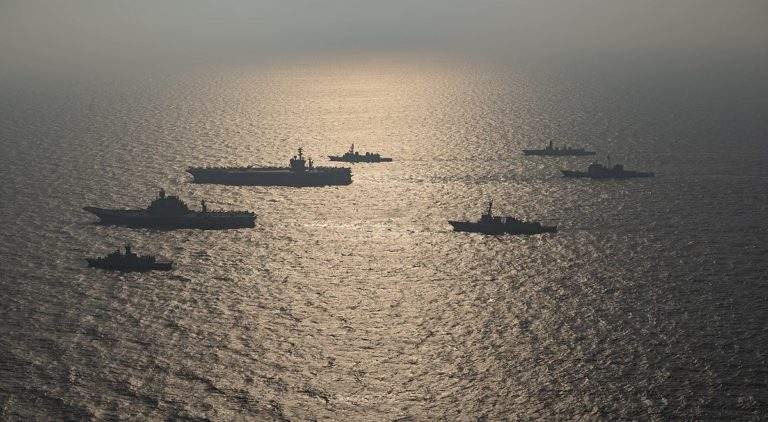 The virtual meeting between the leaders of the Quadrilateral Security Dialogue (Quad) that took place on the 12th of March 2021,  marked a major milestone for the initiative. It was the first time leaders of the US, Japan, India and Australia met under the Quad’s framework, moving the initiative to the next level. Some in China see the Quad as an anti-Chinese coalition and are worried that the initiative may become an “Asian NATO”. There have also been calls for a number of European and ASEAN states to join the initiative, and in 2021, the UK, France, Germany and the Netherlands have all scheduled naval exercises in the Indo-Pacific, signalling their interest in the region´s security. It is likely that EU member states will continue to engage in the region, sometimes through joint naval exercises with Quad members. However, Quad countries greatly depend on China for exports and until this dependency is shifted, the scope of the Quad can only remain limited. Furthermore, far from containing China, the initiative is likely to provoke China into attempting to break away from this containment through, perhaps, more aggressive means.

The development of the Quad

The Quadrilateral Security Dialogue originated after the 2004 tsunami to jointly address the impact of the disaster in the region. It provided a template for Shinzo Abe, former Prime Minister of Japan, to call in 2007 for a dialogue between “like-minded countries in the Asia-pacific region” to address themes of “mutual interest”.  Following this, a joint military exercise took place in the Bay of Bengal featuring the US, Japan, India and Australia´s navies as well as the Singaporean one. However, pressure from China who saw this initiative as an anti-China coalition, the abrupt resignation of Shinzo Abe (the initiative’s main champion), together with the entry of the labour administration in Australia meant that the Quad fell apart. Despite this, in the following 10 years, not only did joint military exercises cement trust and cooperation between all four countries, but also the increased Chinese coercive behaviour such as “gray zone” behaviour around the Senkaku/Diaoyu islands or Australian politicians accepting money from China,  created a common threat that Quad members could not deal with independently. In 2017 the initiative was revived at the assistant secretary level, with representatives of all four countries discussing issues such as the denuclearization of North Korea or the promotion of a rules-based system in the Indo-Pacific. Since then, the Quad has been gaining relevance, despite China’s protests, and on the 12th of March 2021, leaders of all four nations met via videoconference to address common issues.

Today the Quadrilateral Security Dialogue is a flexible and informal strategic dialogue between India, Japan, the US and Australia. The initiative addresses a wide range of issues and never directly goes against Beijing, but for some “the unquestionable glue of the Quad is the need for a vehicle to face the rise of China’‘. According to Asia Times, the initiative’s goal is to intensify the military and economic pressure against China. Even when dealing with seemingly unrelated issues such as vaccine production and distribution, the Quad is effectively acting as a competitor to China, especially in South East Asia. Furthermore, some in the US wish for the initiative to become a NATO-style alliance to contain the People’s Republic of China (PRC).

March Meeting takeaways: “The spirit of the Quad”

A joint statement was released after the joint meeting in March 2021 declaring that all four nations “are united in a shared vision for a free and open Indo-Pacific. We strive for a region that is free, open, inclusive, healthy, anchored by democratic values, and unconstrained by coercion”. In their joint statement, they established three main goals for the Quad.

The statement also addressed issues such as critical technology protection, cyber space, counterterrorism, quality infrastructure investment, humanitarian assistance and disaster relief but with a lesser significance. They also reaffirmed their support for ASEAN and its Indo-Pacific outlook.

Moving forward: How is the Quad initiative likely to develop?

As long as Quad members remain dependent on China for essential supplies, such as rare earths, the QUAD´s impact and outreach will be limited. However, this dependency can be somewhat shifted, either through the development of indigenous production of such materials or a development of ties with South East Asia by increasing, for instance, investment in infrastructure projects. Such a shift will not only further contain China, but will also allow Quad countries to act independently of Chinese influence. In this way, the Quad can become an economic and technological partnership while also addressing the security issues posed by the PRC. Nevertheless, a complete decoupling is impossible and even the proposed partial one would be challenging.

Furthermore, how the Quad will develop greatly depends on China. It is likely to deepen its ties and cooperation if China continues to threaten the status quo. On the other hand, the initiative risks losing traction if China is not perceived as an urgent threat.

Implications for the region: impact on China and ASEAN

While the Quad does not wish to oppose China directly, the initiative can be said to be about China. The PRC is unsettled by the potential consolidation of the Quad and the idea of a Quad plus France, United Kingdom or Germany. However, China is also concerned about ASEAN countries such as Vietnam or the Philippines joining the initiative, as these countries could offer their military bases to the distant European and American navies. The US is already seeking to deepen ties with countries in the region such as Indonesia, Vietnam and Thailand with the hope of it leading to, in the long run, further access, basing and overflight rights. Moreover, there have been calls for Vietnam to be directly  included in the framework. In this way, how ASEAN countries react to this initiative will greatly determine the future of the Quad.

Implications for the EU: How does the EU fit into this development?

The EU has recently developed an Indo-Pacific Strategy in which cooperation with partners as well as the development of a naval presence in the region, have been set out as priorities. France, the United Kingdom and Germany are already increasing their naval activity, by sending a number of battleships to the Indo-pacific, as well as by conducting joint military exercises with some of their Asian counterparts. India joined the rest of the Quad in a French-led naval drill in the Bay of Bengal in April 2021, in the “La Perouse” exercise, with a view of improving Indo-Pacific maritime security. Pankaj Jha stated that the drill´s larger aim is to build a nexus not only in a trilateral France-Australia-India mechanism but also a Quad plus France in the Indian Ocean.

Furthermore, PM Suga was pushing for the first in-person meeting of Quad leaders to take place in the U.K. in June 2021, held on the sidelines of the G7 meeting in Cornwall. Despite the fact that the meeting did not take place, at least officially, and that the US is eyeing September 2021 as a new date for the in-person summit, it signalled the willingness for the potential development of a “Quad plus” involving European countries. Moreover, officials of the British government have not denied the possibility of the UK joining the Quad. The Quad’s flexible nature means that such an expansion could be easily managed, European countries could cooperate with the Quad in areas of their choosing such as disaster relief or security.