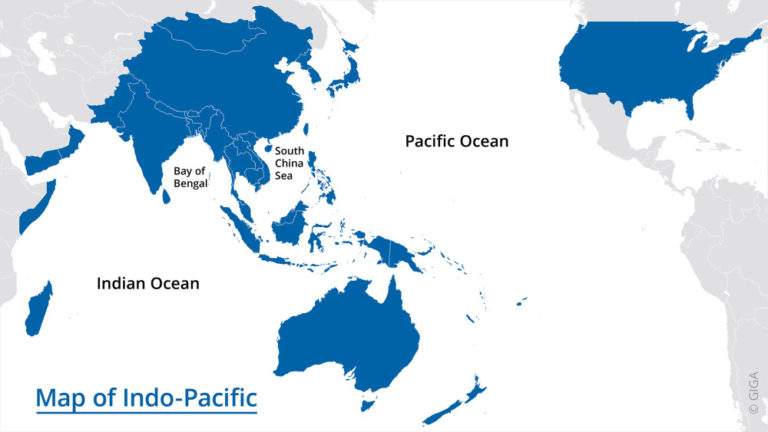 The Indo-Pacific Forum and the EU’s Global Gateway Strategy: Engaging with the new International Order

The EU is redefining their position in the international world order through their Indo-Pacific Plan. In this respect, on 22 February 2022, European and Indo-Pacific representatives for foreign affairs and security policy are set to meet in Paris for the Indo-Pacific Forum.

Chaired by Jean-Yves Le Drian, French Minister for Europe and Foreign Affairs, and Joseph Borrell, Vice-President of the European Commission and High Representative for Foreign Affairs and Security Policy, the hybrid “27+30” summit will bring together EU Member States and Indo-Pacific leaders, among which India, Japan and South Korea, yet excluding China and the United States. The forum’s main focus will be on pressing issues, such as global health, sustainable development, ocean governance, security and defense, as well as connectivity tied to the New Technologies of Information and Communication (NTIC). This event is key for both the French and European agendas, and is a decisive moment for the recently launched EU Global Gateway initiative. This initiative is defined by the European Commission as developing “sustainable and trusted connections that work for people and the planet” and aims to reinforce the EU’s presence on the international stage. It covers five key areas: digital connectivity, climate and energy, transportation, health, education and research. With France heading to the polls in April 2022, the French Presidency of the Council of the European Union is therefore a fundamental turning point in France’s and the EU’s engagement in the Indo-Pacific.

Hence, what can be expected from the “27+30” Indo-Pacific Forum? And what overall strategy are the European partners proposing to balance the emerging power struggles in the region? This EIAS Op-ed will examine how the Global Gateway initiative is pushing the EU’s ambitions in the Indo-Pacific and how they are promoting common interests in light of prevailing challenges. Its analysis will also take into consideration the impact of the French EU Presidency, also in the context of China’s Belt and Road Initiative (BRI).

France’s leading role in the Indo-Pacific

The concept of “Indo-Pacific” has been debated by scholars after being adopted by the United States, Japan and Australia. Jean-Yves Le Drian referred to the Indo-Pacific region as a top priority for France’s EU Presidency while he was in Indonesia, echoing Macron’s words in Sydney in 2018. In their respective strategies for the region, Germany and the Netherlands have also underlined the importance of developing ties between the EU and the Indo-Pacific in 2020, highlighting that despite minor differences, there is a unified view within the EU on the matter, which resulted in the 2021 EU Strategy for Cooperation in the Indo-Pacific. At present, France is the only EU member to have territories in the Indo-Pacific region, with its Exclusive Economic Zone covering Reunion Island, Mayotte, Wallis and Futuna, French Polynesia and New Caledonia. France’s historic and cultural close ties with the region are demonstrated in New Caledonia’s most recent referendum, where the population voted to stay a part of the French Republic. Furthermore, the country has a seat at the South Pacific Defense Ministers’ Meeting. By aiding the EU in carving their new position in the international order and forge ties in the region, France could thus be described as promoting its own interests at the European level, as well as promoting the European policy of “strategic autonomy” particularly promoted by Emmanuel Macron.

According to the report on the French Indo-Pacific strategy, strong partnerships have gradually been established in the region. For instance, Franco-Japanese relations were established in 1995 and have flourished ever since, cooperating on matters including security, economics, culture and innovation, aligning on their vision of democracy and the rule of law. Moreover, France’s strategic relationship with India sees both states cooperating on defense matters, such as space and nuclear cooperation, as well as on environmental matters, such as the protection of the oceans, the development of a “blue economy”, and development of renewable energy sources, with for instance the co-foundation of the international solar alliance and its promotion at the UN. Florence Parly, French Minister for Armed Forces, notably visited New Delhi in December 2021 and met her Indian counterpart, Rajnath Singh, to discuss matters on regional defense. This most likely included the Coordinated Maritime Presence (CMP) in the Indian Ocean. On his side, Subrahmanyam Jaishankar, Indian Minister for External Affairs, joined an event entitled “The French Presidency: EU-India Partnership in the Indo Pacific.” Close and long-lasting relations have been in place between the EU and India and are further exemplified by the purchase of Rafale fighter jets.

The balancing of power in the Indo-Pacific

France’s relations with India are the perfect example of the EU’s ambition in the region: a free and open Indo-Pacific, which contrasts with China’s perspectives of the South China Sea. Jean-Yves Le Drian insisted on the “concretization of the principles we share with respect to rule of law, harmonious relations and post-Covid recovery”, through the intermediary of technology and innovation. The need for further unity was also highlighted at the meeting of European Ministers for Foreign Affairs in Brest on 13 and 14 January 2022. Similarly, European Commission President Ursula von der Leyen is promoting alternatives to “dependencies”, particularly in the context of Chinese diplomatic pressures on Lithuania upon a global trade dispute. China’s notable absence from this Forum is a likely consequence, resonating with the EU’s effort to reinforce its partnerships in the Indo-Pacific, especially with the ASEAN members. The 29th Meeting of the ASEAN-EU Joint Cooperation Committee (JCC) was actually held on 11 February via videoconference, and 2022 will mark the 45th anniversary of the establishment of ASEAN-EU relations.

France’s EU Presidency likely represents the broader international response to China’s growing sphere of influence, and the international post-covid recovery efforts, such as the G7’s Build Back Better World (B3W) policy and the EU’s goal to attain strategic autonomy. For instance, the Foreign Affairs Ministers of the Quad – a strategic and military alliance composed of the United States, Australia, Japan and India – have just met in Melbourne, a group which has been described to work towards countering China’s presence in the maritime zone. While invited to the Indo-Pacific summit, the AUKUS crisis between Paris, Washington, D.C., and Canberra has severely put the relations between France and Australia to the test. Furthermore, since the United States co-hosted a business forum last year related to the Indo-Pacific and given their huge influence in the region, it is contrastingly surprising that US officials have not been invited to the upcoming event. Nevertheless, the European ambition is not necessarily about confronting China and other powers in the region, but  rather to foster cooperation by forging a set of alliances in defense of its own interest, in particular also in view of China’s Belt and Road Initiative. In fine, the forum will definitely mark a footprint in the EU’s vision towards the region, also vis-à-vis China.

Based on the promotion of the EU’s ideas and values, the European Commission notably highlighted the need for strong partners in the Indo-Pacific region. On 24 January 2022, on the International Day of Education, Joseph Borrell underlined that “Europe will work with partner governments on teachers’ training and governance to ensure quality education outcomes” signaling the need to develop alliances in a plurality of domains. The emphasis directed towards the new strategic center of world affairs defines the EU’s ambition to become its own master in a world order which is being increasingly dominated by both the US and China. In this regard, Europe’s reliance on the Indo-Pacific is central in both geo-economic and geostrategic terms, especially since they are combining “70% of the global trade in goods and services and 60% of foreign direct investment flows”.

As a whole, the Paris Forum is going to be key in defining the European view and vision of the current and future state of international affairs. One could expect France to lead the pan-European united approach towards its Indian, Japanese and ASEAN partners, putting into place the EU’s Indo-Pacific strategy that works to provide alternatives to the Chinese and US pathway. Hence, will the EU meet the expectations and succeed in broadening its scope and expanding its partnerships in the Indo-Pacific through the upcoming Forum?

Other organizations, institutions and representatives to be welcomed:

Stairway to Heaven or Highway to Hell? The EU’s Global Gateway and Expanding Economic Statecraft

An “Indo-Pacific” Outlook for the European Union