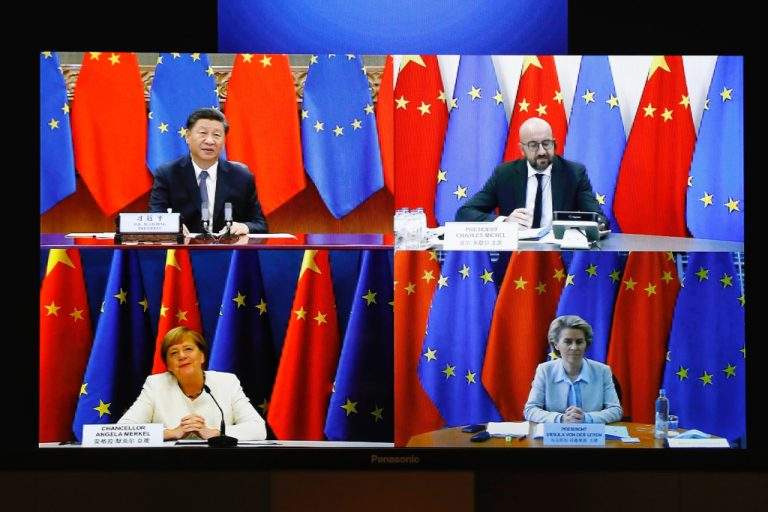 Leaders from the EU and China met on Monday 14 September 2020 via video conference in a meeting that echoed their summit in June. Discussions continued to be riddled by disagreements and inertia and ended with no joint statement; perhaps a sign of the fragile nature of current EU-China relations. The relationship has been soured by the Covid-19 pandemic with the EU taking exception to China’s ‘mask diplomacy’ of providing medical supplies to numerous members of the EU27, perceiving it as an attempt to create discord within the bloc. Growing tensions between the two strategic partners have not been helped by the struggles over the Comprehensive Agreement on Investment (CAI) and Chinese attempts to deny a level playing field for EU companies looking to invest in the mainland. The human rights situation in Hong Kong and Xinjiang, addressed by the EU during the leaders’ meeting, has also contributed to the feeling of unease between the two. Chaired by Council President Michel on the EU side and President Xi on China’s, the EU was also represented by Commission president von der Leyen and Chancellor Merkel as a result of the rotating German presidency of the Council. A wide range of issues were covered during the discussion, including climate change, trade and investment, Covid-19 recovery, international political affairs, and human rights.

Overall, the summit was ‘poor on results’, as described by Reinhard Bütikofer, a Green MEP and Chair of its Delegation for Relations with China. The only notable agreement of the two sides concerned Geographical Indications, improving reciprocal market access for more than 200 agricultural products of exceptional quality from regions within the EU and China. Though this signals some positivity concerning mutual trade benefits, it plays against the context of strained bilateral dynamics, accelerating the already existing friction between China and Europe.

Von der Leyen pressed on the issue of the Comprehensive Agreement on Investment (CAI), the negotiations of which started in 2014, discussions of which she described as ‘frank and open, constructive and intense’. Some movement appears to have been made on the regulation of Chinese state owned enterprises, transparency of subsidies and forced transfer of technology while political will was demonstrated on both sides to seal the deal by the end of 2020. However, some pressing issues remain, particularly pertaining to the extent of Chinese market access to which European IT and automotive companies would receive and industrial overcapacity.

In terms of climate change, the EU is calling to see more action taken by China in manifesting itself as a reliable partner to achieving global climate goals and in attaining  carbon neutrality by 2050 as per the Paris Agreement. Both partners also discussed the advent of Covid-19, with the EU stressing the need for a joint international effort in finding and distributing a vaccine. The EU thereby called for an independent review to the lessons arising from the pandemic, also asserting a reinforced role for the WHO.

Political issues and human rights remain a sensitive subject in EU-China relations. A riposte from President Xi concerning the ‘double standards’ applied by the EU were met with resistance, clarifying that the issues Xi was mainly referring to in the form of anti-semitism are being addressed, and  that the EU differs from China in that these issues are discussed ‘publicly’. The EU also registered its concern over the recently adopted national security legislation in Hong Kong and protection of fundamental rights in the territory which have been stipulated under the Sino-British Joint Declaration. President Michel raised his unease regarding the cases of Uighyur Muslims in Xinjiang, and Tibet, with President Xi showing his receptiveness to a potential visit of independent observers to the latter province. This exemplifies the direction EU-China relations are increasingly taking, pushing the EU to implicate more values-based policies toward China. There is also a rising criticism that Chancellor Merkel is becoming ‘out of sync’ with the rest of the Union, evidenced through her apparent amicable performance toward China and her reluctance to discuss human rights and geopolitical issues. Outside observers highlight her growing dependence on the success of the CAI as the reasoning behind her unwillingness to speak out on the events in Hong Kong and Xinjiang. Merkel and Germany could soon find this causes concern from not only the EU, but also Asian democracies in the region and the United States.

The next summit, gathering the leaders of China and the 27 EU Member States, is expected to take place in Brussels in 2021. This will likely be after the end of the German presidency of the Council; disappointing considering the digital summit was originally to be held physically in Leipzig as one of the Presidency’s showpiece events, but postponed due to the Covid-19 pandemic. With nothing concrete to emerge from these recent virtual talks, except for the commitment to advance the High-Level Digital Dialogue and the dedication to conclude the CAI before the end of the year, the EU should recognise that more than just words are needed to get clear deliverables. Concrete action is required in order to establish the much-desired level playing field for EU companies operating in China and to balance its relations with China.

The EU should put forward a new coherent and rational policy toward China that can unify all 27 member states.  In terms of trade alone, current policy is multifaceted and too complex; the EU currently regards China as a ‘cooperation partner’, negotiation partner, systemic rival  and ‘economic competitor’. A new approach should begin with creating an adequate framework to allow member states to shape their EU-China policy which in turn will improve cooperation between the 27 and allow the EU to leverage the full power of its market. The EU’s stance on China currently differs from that of some of its national governments, with the EU attempting to balance its values-based approach and desire for economic cooperation, while some member states have become more antagonistic (Czech Republic, Poland) or have been embracing closer relations with China (Italy, Greece).  The EU should maintain its increasingly principled approach towards China while updating its Strategic Outlook from March 2019 to take into account the issues pertaining to Covid-19, Hong Kong and Xinjiang, besides trade and investment. Emphasising a more representative EU-China policy would not only counteract its current perceived Franco-German dominance, but allow a stronger and more unified negotiating strategy with regard to the completion of CAI.