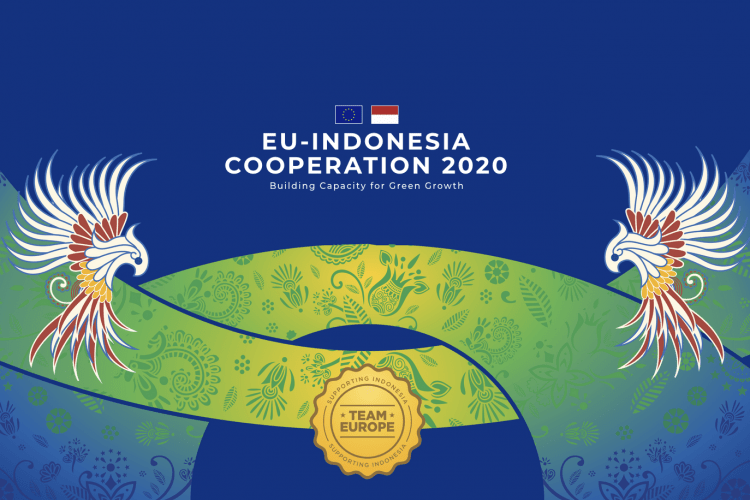 The EU and Indonesia: Committed to a sustainable economic recovery

On 17 September 2020, in a virtual event with the Minister for National Development Planning Agency (Bappenas) Suharso Monoarfa, and the EU Ambassador to Indonesia, Vincent Piket, the “EU-Indonesia Cooperation Publication – Building capacity for Green Growth” was launched. It calls for attention on EU-Indonesia cooperation, a thirty-year strategic partnership which, despite the current health crisis, keeps addressing joint priorities and global challenges.  The publication rehashes EU-Indonesia efforts to overcome the COVID-19 crisis and draws attention to post-pandemic economic recovery.  It shares success stories in dealing with some of the major challenges of our time, notably health, education, social inclusion, security, economic growth and environmental protection. Those are bent together by a common denominator: climate change and sustainable growth. Accordingly, the EU and Indonesia are both sidings with the Paris Agreement and committing to sustainable development. They both advocate for a sustainable economic recovery, a “Green Growth”, which pursues economic development while also preserving the environment.

The publication brings the EU-Indonesia partnership in promoting sustainable growth to the fore and offers an occasion to take stock of past initiatives, as well as to investigate achievements and missteps. Examples of such efforts can be found in the response to the pandemic. Indonesia is one of the most affected countries by COVID-19 and despite government efforts, the country still counts 4,000 cases per day, surpassing 250,000 cases since the beginning of the pandemic. The health emergency has consequently impacted the  economy, whose projections are alarming: an annual inflation of 1.42% (far below the target of 3%), a 2% GDP contraction (from an expected 0% GDP growth) and a budget deficit estimated at 6.34% of GDP (more than twice the original cap of 3%). To support Indonesia’s response to the coronavirus, the Team Europe Package has been lofted. Launched in June and worth EUR 5.3 million, the EU has donated protective equipment, test kits, clothing, food and hygiene supplies, along with other actions supporting a better response to the COVID-19 pandemic.

With a partnership of over 30 years, EU-Indonesia sustainable cooperation has really taken off in the last few decades. The EU recognises that joint action on climate change and the environment is an urgent global priority. For such a reason, it is working with Indonesia to achieve shared goals, in particular regarding sustainable, low-emission land use, resilience and mitigation and energy efficiency. This cooperation has been quite rewarding. For instance, the Voluntary Partnership Agreement (VPA) made Indonesia the first country to obtain the FLEGT (Forest Law Enforcement, Governance and Trade) licensing for its timber products exported in the EU market. Switch-Asia, the programme aiming at decoupling economic progress from resource use, has been instrumental in assisting the country in mainstreaming Sustainable Consumption and Production (SCP) in Indonesia, which has been incorporated into the national medium-term development plan 2015-2019.

However, despite EU advocacy for sustainable green growth in Indonesia, and the latter’s efforts to comply with European and International regulations, attempts on both sides have been brought into question. Regulations and EU policies have been seen as too complex/ambitious to be carried out effectively, and arduously implementable. The VPA offers a case for that. The System Verifikas Legalitas Kayu (SVLK), the Indonesian certification awarding FLEGT licenses, lacks robustness. It provides for insufficient monitoring and its capacity constraint limits the pace and effectiveness of the auditing process.  Indeed, despite the Indonesian VPA recognises the SVLK as the system for verifying the legality of Indonesia timber exports, it only applies to timber exported from Indonesia to the EU and is unconcerned with timber that enters the European market from other points of departure. In those cases, the EU Timber Regulation (EUTR) complements the VPA mechanism, regulating Indonesian timber exports to third countries, which then are re-exported to the EU. However, the EUTR only applies to actors that place timber on the market for the first time. Inevitably, it creates a loophole in the timber business and brings to question the effectiveness of such regulations.

Talking of questionable EU-Indonesia responses, the palm oil controversy remains in the spotlight. In 2019, Indonesia filed a lawsuit at the WTO against the Renewable Energy Directive II (RED II), accusing it of discriminating against oil palm products. With the European Union trying to phase out palm oil use in biofuels, and Indonesia still accounting (together with Malaysia) for  85% of total world’s palm oil production, the contention is still unsolved. According to the 2020 Fern report, Indonesia and the EU hold differing views on how to deal with palm oil and on the adequacy of the Indonesian Sustainable Palm Oil (ISPO) standard. The upcoming Indonesia-EU Comprehensive Economic Partnership Agreement (CEPA) of the following months will unveil the EU’s and Indonesia’s ability to reach a common agreement.

The “EU-Indonesia Cooperation Publication – Building capacity for Green Growth” has been introduced at a time of transformation and arduous challenges. Despite the COVID-19 pandemic’s harsh impact on both the European Union and Indonesia, the publication relaunches their cooperation, which is already looking beyond the pandemic crisis and the period of recovery. The two countries appear ready to face their most challenging aspect of the coming years, promoting an economic recovery while keeping track of sustainable development. However, the FLEGT licensing and palm oil controversy will remain major stumbling blocks. It appears, indeed, that the EU has ambitiously promoted sustainable policies in Indonesia, without assuring their correct implementation into the Indonesian legislative framework.  On this, the climate neutrality and green transition’s goal of the new-born European Green Deal are surely going to be challenged. However, being the world’s third-largest democracy, one of the most biodiversity-rich places on earth and a key EU trade partner, Indonesia will undeniably be an essential ally for the EU to take the next step of change toward a sustainable economic recovery.