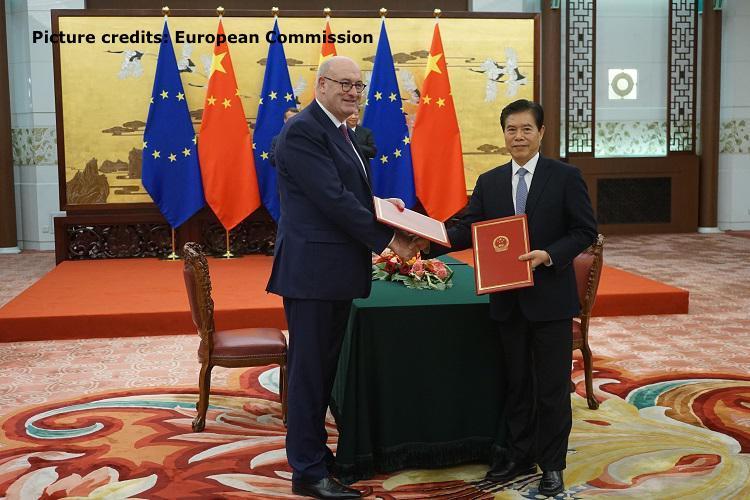 The Agreement on Geographical Indications: An Initial Step Towards A More Reciprocal EU-China Economic Relationship

On 6 November 2019, during the second China International Import Expo (CIIE), the EU Commissioner for Agriculture and Rural Development Phil Hogan and the Chinese Minister of Commerce Zhong Shan concluded in Beijing the negotiations on an agreement on Geographical Indications (GI). The deal will protect 100 European and a further 100 Chinese GI products. Once it enters into force towards the end of 2020, the agreement will protect genuine products against imitations and usurpation. The list of products includes the likes of Cava, Champagne, Feta, Münchener Bier, Ouzo, Polska Wódka, Prosciutto di Parma and Queso Manchego. At the same time, Chinese GI products that will be protected include Pixian Dou Ban (Bean Paste), Anji Bai Cha (White Tea), Panjin Da Mi (rice) and Anqiu Da Jiang (Ginger). Furthermore, it is expected that after four years the list will be expanded to cover an additional 175 GI of both the parties.

The collaboration between EU and China on GI started in 2006 and the first deal was concluded in 2012, when both sides agreed to protect 10 GI products each. The negotiations of the latest agreement started 8 years ago and followed the boom of the Chinese demand for European GI products during the last decade. Today, China is the second destination of EU GI, representing 9% of its total export.

The conclusion before the end of 2019 of the treaty was a priority highlighted in the annual EU-China summit of April 2019. Furthermore, the CIIE represented also the occasion to hold the 24th round of negotiations between EU and China on the Comprehensive Agreement on Investment (CAI). The CAI aims to replace the single bilateral investment agreements the Member States have in place with China and, most importantly, ensures the principle of reciprocal market access level for both the parties. The negotiations are expected to be concluded in the Autumn of 2020.

Today, the cumulative Chinese Foreign Direct Investment (FDI) stock in Europe has caught-up to the European FDI stock in China. Indeed, in the last years the latter has invested in many European sectors, reaching a peak of EUR 37,2 billion in 2016. Moreover, China is committed to invest in critical infrastructures: for example, Chinese telecommunication companies are the favourite to roll out the 5G in Europe in the future, raising concerns on how big Chinese ICT companies may collect data and guarantee the EU members’ sovereignty. At the same time, the EU has criticized China for the fact that most of the sectors of the Chinese market remain restricted to foreign investors or impose burdensome and restrictive requirements.

For these reasons, the CAI figures as a cornerstone of the EU strategy to achieve a more balanced economic relationship with China. Published last March by the European Commission, the strategy sets a more assertive EU approach towards China. Such shift is proved by the fact that in the document, for the first time, China is not only defined as a partner but also as a “strategic rival”.

The EU is committed to levelling the playing field with the Asian giant, but its success is not preordained. Even though the conclusion of the agreement on GI can be considered as a positive signal, still a lot has to be done. For instance, the attempts to reform the World Trade Organization (WTO) rules on state subsidies, another priority included in the EU strategy towards China, have not yet shown concrete results. Regarding the CAI Hogan itself, which in the von der Leyen Commission will be handling the trade portfolio, stated that the negotiations had “made limited progress”.

In the next years the new Commission will have to put substantial political capital into convincing China to fully agree on its requests. This work should also take into account the different approaches of the EU members on the Chinese economic penetration in Europe.

Indeed, some increasingly visible cracks are appearing between the EU Member States. French President Emmanuel Macron attended the CIIE and held a meeting in Beijing with Chinese President Xi Jinping, where he stressed the relevance to conclude the negotiations of the CAI. In this sense, Macron represents the critical camp within the EU towards China on state subsidies, unequal market access and illegal appropriation of technologies. At the same time, it appears that other European countries are going in another direction. On 11 November, for example, Xi Jinping and the Greek Prime Minister Kyriakos Mitsotakis agreed on an investment deal worth EUR 600 million to expand the Piraeus port. The investment will be carried out by COSCO Shipping, the company that in 2009 won the concession of the port for 35 years. It confirms the aim to make the Piraeus the most important logistic hub for the Chinese goods shipped to Europe, in accordance also with the Belt and Road Initiative (BRI). Finally, different perceptions of Chinese investments divide even national governments. Last month, following the circulation of a German Economy Ministry draft proposal concerning the security criteria for selecting 5G suppliers that didn’t exclude Huawei, the Foreign Minister Heiko Maas and Defence Minister Annegret Kramp-Karrenbauer raised doubts on whether Huawei could actually participate to the German 5G network construction.

These examples show how differentiated and fragmented Member States are towards China on the economic field. In order to achieve other successes like the Agreement on GI, the EU will have to take into account also these differences and find suitable solutions for all the parties, if it wants to have “one voice” vis-a-vis China.