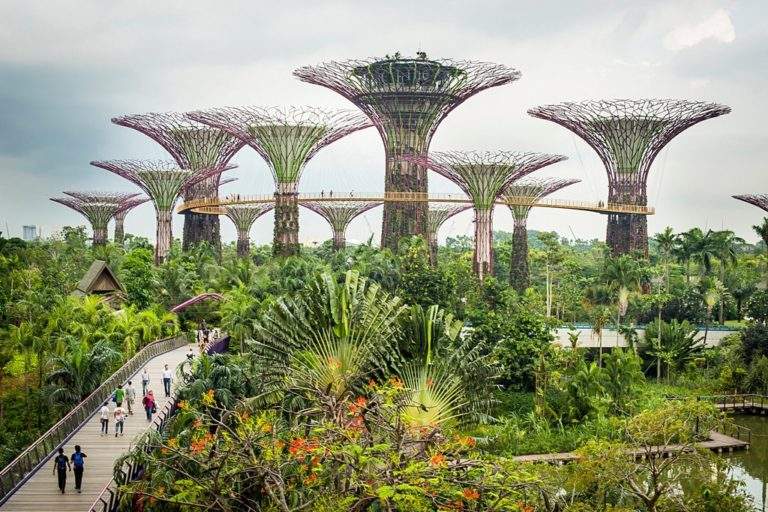 Since the EU-Singapore Free Trade Agreement (FTA) came into force in November 2019, political, trade, and investment ties between the two partners have grown steadily closer. As the first Southeast Asian country to sign an FTA with the EU and as its largest commercial partner in ASEAN, Singapore represents a strategic and natural partner for Brussels in the region.

Besides trade, one other sector in particular stands out due to its potential to foster stronger cooperation: sustainability. While both entities have set ambitious targets in the framework of their respective roadmaps (Europe’s Green Deal and Singapore’s Sustainability Concept Plan), mutual benefits could be increased thanks to greater synergy on the green agenda.

As a small city-state with substantial expertise in finding sustainable solutions located in a region that is one of the world’s most vulnerable to the effects of climate change, Singapore’s innovative approach and readiness to transition towards an eco-friendlier economy is of high value to the EU. By highlighting the general approach taken by the Lion City, along with three of its recent initiatives, this op-ed will suggest potential paths for the EU to tap into Singapore’s experience to meet its own environmental objectives.

The Case of Singapore

The importance of sustainability has long been a part of Singapore’s DNA. Since its independence from Malaysia in 1965, the founding prime minister Lee Kuan Yew made a clean and green city the cornerstone of his government’s policies. Given the country’s limited land and resources, coupled with its growing population, leaders understood early on that a sustainable urban development was essential for Singapore’s economic progress. As a result, the city-state has developed a bold and innovative agenda by becoming a living laboratory for smart solutions, earning itself the nickname of ‘Asia’s greenest city’.

With regard to its general approach to the climate crisis, Singapore’s vision is rooted in two intertwined action plans: a long-term ‘Concept Plan’ which guides its development for the next 50 years, along with a medium-term ‘Master Plan’ which translates these broad strategies into detailed projects over the next 10 to 15 years. To effectively develop and implement these sustainable policies, the city-state has also taken a ‘whole-of-government’ and ‘whole-of-nation’ approach. On the one hand, the ‘whole-of-government’ vision, by recognising that climate change represents an increasingly complex and cross-cutting issue, calls for greater information sharing among public agencies to better consider the spill-over effects of policy actions. Since 2007, the Lion City has therefore established an ‘Inter-Ministerial Committee on Climate’ to ensure a more coordinated approach on the matter. On the other hand, a ‘whole-of-nation’ effort is encouraged by consulting extensively with the private sector and civil society to find creative solutions as well as secure a greater buy-in from all stakeholders.

Among the numerous initiatives Singapore has taken, three stand out for their relevance to the EU. The first one refers to the development of urban greening. A global leader in the field, Singapore has incorporated skyrise greenery in its urban landscape in a variety of ways; from roof gardens and sky terraces to green walls. Besides their aesthetic value, the practice has profound environmental, economic, and social benefits.  To begin with, urban greening helps mitigate the so-called ‘urban heat island effect’ which occurs when cities are significantly warmer than their surrounding rural areas due to the heat generated from human activities trapped by surfaces such as buildings and roads. By providing a form of insulation by shading heat-absorbing concrete from the sun, the method helps to cool buildings, reduce energy consumption and lower overall temperatures. In addition, incorporating vegetation to buildings acts as a natural air purifier by absorbing airborne particles, while having positive effects on the stress reduction of inhabitants. To develop this practice, Singapore has implemented the ‘Skyrise Greenery Incentive Scheme’ which funds up to 50% of installation costs of roof and vertical greeneries for building owners and developers. Since its introduction in 2009, the scheme has already assisted in greening more than 220 buildings. Given the high urban population in the EU, the amount of roof and facade surfaces available, and the fact that temperatures tend to get warmer every year, a more intense practice of urban greening could be valuable to European cities, particularly in its Southern region.

A second initiative worth highlighting relates to innovative techniques vis-à-vis water and waste treatment and management. Whereas the treatment of used water and waste have traditionally been independent processes, Singapore is currently building the world’s first integrated facility: Tuas Nexus. By co-locating these installations, the government seeks to optimise land use, resource recovery, and energy efficiency. In particular, this new project will increase the yield of biogas production by enabling the co-digestion of food waste with used water sludge, which will in turn improve thermal efficiency and generate more electricity. As a consequence, not only will the facilities be energy self-sufficient but the excess of electricity production will be exported to the national power grid, resulting in savings of more than 200,000 tonnes of carbon dioxide annually. Moreover, this ability to reap the benefits of the synergies offered by the water-energy-waste nexus is made possible in part due to Singapore’s international expertise in water management. Indeed, thanks to the government’s investments in research and technology, the city enjoys a strong reputation for its know-how in the field and acts as a ‘hydro-hub’ globally. In this context, it is clear that Singapore’s expertise in both integrated treatment and water management, could be useful to the EU Member States, particularly the water-stressed ones such as Belgium, Spain, Cyprus, and Greece.

Lastly, the third initiative refers to the practice of green financing. The concept refers to investments that are made in companies that support or provide environmentally friendly products and pratices (such as the promotion of renewable energies or the reduction of industrial pollution). Already representing one of Asia’s major financial hubs, Singapore is planning to become a leading centre for sustainable finance globally. In fact, in 2019 the city-state was already the largest ASEAN green finance market, a position previously held by Indonesia. In January 2021, the Monetary Authority of Singapore (MAS) decided to take it one step further by launching the world’s first ‘Green and Sustainability-Linked Loan Grant Scheme’. In short, while green loans serve to finance new or existing eco-friendly projects, sustainability-linked credit provides price incentives for borrowers to achieve sustainability performance targets. The objective behind this new scheme is to support corporates of all sizes, especially small and medium-sized enterprises (SMEs), to obtain financing by defraying the expenses of engaging independent service providers to validate the sustainability credentials of the loan. The grant also aims to encourage banks to develop frameworks so that SMEs can access such financing more easily. Alongside this project, in October 2020 MAS has announced the creation of a ‘Centre of Excellence’ to conduct research and train professionals to become green finance talents. By collaborating with local and international universities, the institute thereby seeks to constitute a talent pool which financial institutions can tap into as they deepen their capabilities. The combination of these two complementary efforts – the facilitation of green and sustainability-linked loans for SMEs and the creation of academic centres – are particularly welcomed as they fill existing gaps vis-à-vis the access of financing services and the lack of adequate training.

To conclude, Singapore’s limited land and natural resources coupled with its high population density, have pushed it to consider the importance of sustainability from its early days. By adopting a long-term vision in its policy making, along with an inter-ministerial and bottom-up approach focused on innovation, the Lion City has become a global leader in sustainable solutions.

Given that both the EU and Singapore share similar ambitions towards a greener future, it appears particularly relevant for Brussels to consider closer ties with its Southeast Asian ally to advance its own environmental objectives. In particular, three key recent initiatives related to urban greening, water and waste management and sustainable finance, have highlighted where Singapore is taking the lead. These solutions thus provide us with concrete and valuable examples of potential cooperation opportunities between the two partners.

In the current context, where the EU-ASEAN partnership has recently been upgraded to a ‘strategic’ level, while the COVID-19 pandemic has given new impetus for political and business leaders to tackle sustainability issues, there is now a window of opportunity for stronger bilateral cooperation. However, the outcome of this promising partnership will not be assessed based on the number of speeches being delivered, but rather on the bold actions being taken to mitigate environmental damages.