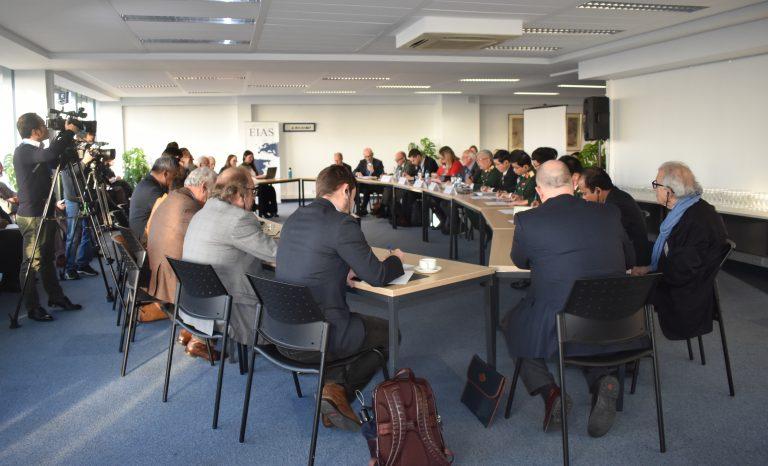 On November 21, the European Institute for Asian Studies (EIAS) hosted a closed-door roundtable on ‘Strengthening EU-Viet Nam Defence and Security Cooperation’. This event served as a platform to exchange views on cooperation from European and Vietnamese experts and officials, following the signing of the EU-Viet Nam Framework Participation Agreement (FPA) last month.  EIAS Advisory Board Member Mr Xavier Nuttin opened the discussion by highlighting the growing importance of security in the agenda of the European Union, pointing at the 2017 Global Strategy for the European Union’s Foreign and Security Policy as emblematic of this new focus on security.

Following these opening remarks, the Vietnamese Ambassador to the EU, H.E. Mr Wu Anh Quang emphasised how cooperation with the Union is a priority for Hanoi, which has so far been at the forefront for EU-Asia and EU-ASEAN cooperation in many fields. His Excellency highlighted that Viet Nam-EU cooperation is based on a shared understanding and interest in upholding multilateralism and a rule-based international system. He described this cooperation as comprehensive and strategic, fundamental to contribute to peace and stability in the region and wide-ranging – encompassing issues of political cooperation, sustainable development, good governance, human rights. After signing the FPA, Viet Nam and the EU are now also partners in the security realm.

The floor was then given to His Excellency Sr. Lt. Gen. Nguyen Chi Vinh, Vice Minister of National Defence of Viet Nam, for the keynote remarks. His Excellency stressed how a greater EU-Viet Nam cooperation in the field of security and defence is mutually beneficial and fundamental to ensure that Brussel’s interests, not just in the Asia Pacific region but in the wider world, are addressed. The Vice Minister also highlighted that the EU and Viet Nam share the same concerns with regards to pressing issues such as terrorism, cybersecurity and maritime security. Given the globalised nature of today’s world politics and economic, Minister Vinh added that the security and economy of both the EU and Viet Nam are affected by situations of instability around the globe. The Vice Minister pointed out that the EU-Viet Nam FPA is significative in that it allows for knowledge exchange and joint training sessions involving military officers from Europe and Viet Nam. He also highlighted that the Vietnamese government is committed to contribute with its military personnel to EU missions in African countries, with the aim of sharing their experience in the medical field and in post-war reconstruction. In particular, His Excellency stressed that Viet Nam is willing to share information about their achievements in demining and decontaminating areas polluted by dioxin. Contributing to peace and stability in war-affected countries in other regions of the world is just one of the reasons identified by the Vice Minister as driver of Viet Nam’s greater engagement with security cooperation with the EU. Another important aspect in Hanoi’s rationale behind the signing of the FPA is a result of the growing tension in the Asia-Pacific coming from a heightened big-power rivalry. Although Viet Nam supports the engagement of great powers in the region, it condemns militarisation and arm race for the sake of its people and nation. Therefore, according to the Vice Minister, Hanoi wants to increase its cooperation with international bodies to ensure that regional peace, stability and a peaceful resolution of regional disputes are maintained. Hanoi looks at Brussels as a suitable partner to achieve these objectives. A cooperation with the EU is seen as a way to ensure that Vietnamese security concerns such as the South China Sea are addressed peacefully, in accordance with international regulations and in respect of the rights of each country involved in this dispute.

Dr Alison Weston, Head of Division for Partnerships and Agreements from the European External Action Service (EEAS) built on the discussion by presenting the EU perspective on EU-Viet Nam security cooperation. On the significance of the EU-Viet Nam FPA, Dr Weston stated that this agreement indicates the beginning of a greater partnership between the EU and Viet Nam, particularly in the realm of crisis management and security. Dr Weston highlighted the dual nature of this FPA. The agreement is first and foremost operational, in that it allows for Viet Nam’s practical participation to EU Common Security and Defence Policy (CSDP) crisis management missions around the world. Another facet of this agreement is connected to its political nature, since it further demonstrates the EU’s commitment to play a greater role as a global security provider – both for traditional and non-traditional security issues. According to Dr Weston, the signing of EU-Viet Nam FPA is a tangible sign that the EU’s growing engagement with security is not limited to its immediate neighbourhood but encompasses the wider world. Moreover, it displays the EU’s readiness to scale up its cooperation with Asian countries to address global challenges. Dr Weston stressed that the crisis management missions in which Viet Nam is going to participate are not taking place in Asia but in Africa, Middle East and Europe. Therefore, this agreement must not be read as an indicator of the EU’s will to interfere with regional affairs, but rather as the desire of the EU to address common security challenges together with its strategic partners with which the Union shares values and objectives. Viet Nam’s participation to EU CSDP missions and operations, which often operate side by side to UN Peace Keeping Operations, is mutually beneficial. On one hand, it will contribute to reinforce EU international legitimacy and the Union will have the chance to learn from Vietnamese experience and knowledge in defence and security. On the other, it will allow Viet Nam to be a more proactive contributor to international security and peace, while at the same time enhancing the professionalism of Vietnamese troops. The EU-Viet Nam partnership as formulated in the FPA will focus on the provision of capacity building, maritime security and cyber-security, while ensuring that ownership of Viet Nam is respected and security interests and values shared among the two parties uphold.

The discussion continued with the second panellist Mr Bruno Hellendorff, Joint Research Fellow at the Egmont Institute and European Policy Centre (EPC) expert on defence and security issues in Europe-Asia relations. His analysis of the current status and future trajectories in EU-Viet Nam security and defence cooperation revolved around three points. First, he stressed that the signing of EU-Viet Nam FPA is particularly symbolic because it displays an emphasis on aligning economic interactions with strategic and defence elements. The EU and Viet Nam signed a Trade Agreement and an Investment Protection Agreement on 30 June 2019. The two parties then complemented this agreement with one in the realm of security and defence. Second, he highlighted that the EU’s engagement with Asia is evolving and becoming more and more multifaceted – being built both upon bilateral and multilateral relations. Security, maritime security in particular, is becoming increasingly central in EU-Asia and EU-ASEAN cooperation. Mr Hellendorff noted that maritime security in EU-Asia relations has the potential to play an important role in enhancing inter-regional cooperation. In particular, he emphasised the need for the Union to update its strategy to encompassing the concept of Indo-Pacific. As for his third and final point, Mr Hellendorff mentioned the South China Sea dispute as a central issue to be considered when discussing security in Asia and EU-ASEAN cooperation. Within ASEAN, Viet Nam is one of the countries which have been more affected by China’s growing military power in the area and the resulting power asymmetry. He pointed out that, although there is disagreement over sovereignty, all partners agree upon the centrality of maritime security. Hence, the EU can contribute with its expertise to the enhancement and resolution of other pressing issues, such as the fight against pollution and the safeguard of biodiversity in the area.

The two panellists were followed by a thought-provoking Q&A session. Attendants raised questions about the EU’s support towards freedom of navigation, its engagement with the South China Sea issue in practical terms, the possibility to come to a peaceful resolution of outstanding regional issues in Asia and the extent of the influence of great power rivalry for both Asia and the wider world.