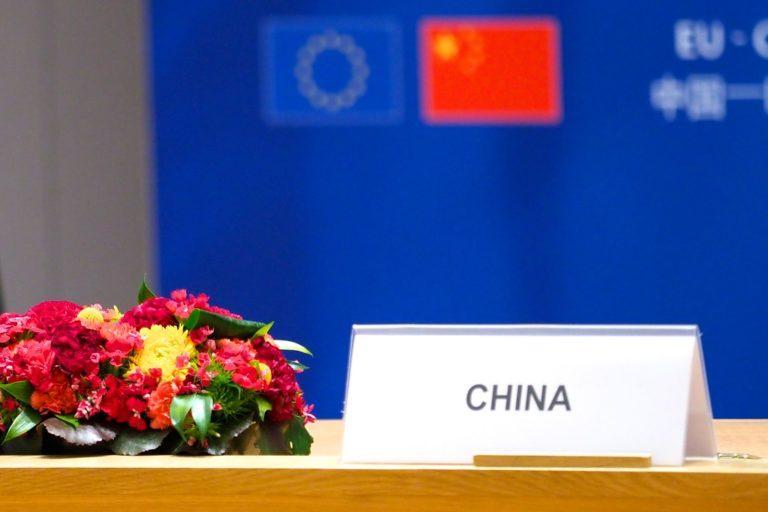 Stagnation in EU-China Economic Relations – What comes next?

The Comprehensive Agreement on Investment (CAI) agreed by China and the EU on 30 December 2020 was described by the European Council as rebalancing ‘the trade and investment relationship between the EU and China based on values and sustainable development principles’. However, 18 months after the agreement-in-principle, its ratification seems deadlocked. COVID-19 has deeply slowed the development of ties and exacerbated political issues between the blocs. What can the future bring for EU-China economic relations and the CAI after COVID-19?

In March 2019, the EU described China as a ‘partner’, an ‘economic competitor’, and a ‘systemic rival’. The EU repeated this description in its Strategic Compass in March 2022. The inherent tensions in such an understanding of China reflect a broader tension in the EU’s China policy. The EU wants to maintain and grow business relations with China, while also criticising China’s human rights record, governance model, and foreign policy. China, for its part, remains eager to achieve the former objective, but resists European criticisms of its domestic affairs. This tension has exacerbated a broader stagnation in efforts to deepen economic relations brought about by the COVID-19 pandemic. Given the sheer volume of trade between the two blocs (EU-China trade in 2021 saw imports of 472.2 billion EUR and exports of 223.3 billion EUR, averaging 1.9 billion EUR a day), this stagnation has significant global implications.

The COVID-19 pandemic has greatly impacted EU-China trade relations. Global value chains were significantly disrupted by governmental restrictions to limit the coronavirus’ spread. EU firms, whose inputs from China were constrained by the restrictions, were particularly hurt. FDI flows between the EU and China, having already been comparatively low given the size of their economies, also fell as states responded to the pandemic. Trade flows were heavily affected by the onset of the pandemic. While EU-China trade volumes in the first quarter of 2020 remained stronger than those of the EU’s other top 5 trade partners – as EU-China trade volumes grew in this period – trade in goods over the whole of 2020 still fell, relative to 2019. Though trade recovered over 2021, the composition of this trade changed due to the pandemic. Eurostat recorded significant losses in trade of EU automotive products, aircraft and associated equipment, whereas trade of Chinese data processing machines, textiles, and certain Chinese electronic products rose rapidly.

A report from DG TRADE noted that the COVID-19 pandemic had revealed major dependencies on China, particularly in the textiles and electronics sectors. This has forced a broader rethink of approaches to China, as the report advocated strengthening the resilience of international supply chains. COVID-19 also forced a rethink of political relations with China, described as shifting from ‘naiveté’ to ‘realism’.

The stagnation associated with COVID-19 has coincided with broader resistance to China engagement. The CAI best demonstrates this. An agreement-in-principle was reached in December 2020 which promoted liberalisation of diverse sectors of the Chinese economy for EU companies, including financial services, manufacturing, and the automotive sector. The agreement bound China to remove other existing barriers to market access for European businesses in certain sectors, securing a better level playing field for EU businesses working in China. China committed itself to ratifying two fundamental conventions of the International Labour Organisation (ILO) relating to forced labour and to effectively implementing the Paris Agreement on climate. The agreement was strongly backed by former German Chancellor Angela Merkel, whose country was then heading the Presidency of the Council of the EU, as well as by French President Emmanuel Macron.

18 months later, however, ratification of the agreement seems completely stuck. Though China remains in favour of its implementation, Germany’s erstwhile support for the CAI has weakened. Merkel’s departure from the German Chancellery has not only denied the CAI a strong supporter, but has also seen a more sceptical government installed in Berlin. Though the Chinese foreign ministry claimed that incumbent Chancellor Olaf Scholz was in favour of the CAI’s introduction, his Ampelkoalition government – composed of the more China-sceptic Greens and Liberals as well as Scholz’s Social Democrats – has been more reluctant to promote the agreement than Merkel. Indeed, the coalition agreement agreed between the parties argued that the CAI’s ratification at the European Council was unfeasible for ‘various reasons’.

In government, the tri-party coalition has gone further, by directly criticising China. In a recent press release, Robert Habeck, the Federal Minister for Economic Affairs and Climate Action and former co-leader of the Greens, declared that Germany – having previously ignored problems in China’s human rights record – had changed position. The press release declared that the Federal government would reduce its China dependency and aim to safeguard human rights. Germany’s Foreign Minister, Annalena Baerbock, has likewise adopted a more directly critical approach to China. Following the publication of a cache of files claiming to depict human rights violations in Xinjiang, Baerbock condemned the human rights violations and requested clarification from her Chinese counterpart. This greater willingness to criticise China points to a shift in German policy away from a business-oriented approach towards a more human rights-oriented one. This shift goes beyond rhetorical criticisms, as shown in the decision to suspend investment guarantee schemes for German firms operating in the Xinjiang region. This decision forces German firms operating in Xinjiang – including Volkswagen, Bosch, and Siemens – to bear financial risks alone with no investment guarantees from the government.

This receding support from Germany has been matched by a broader China-sceptic shift among EU member-states’ policies. Lithuania has been embroiled in a protracted diplomatic dispute with China over its decision to allow the opening of a representative office in Vilnius under the name ‘Taiwanese’, a perceived slight of the ‘One China’ policy to which the EU adheres, whereby states recognise the People’s Republic of China but not the government in Taiwan. This dispute has seen China hit Lithuania with import bans and downgrade the Baltic state’s diplomatic status. Other EU member states have criticised China’s treatment of Lithuania and Macron recently raised the issue with Chinese President Xi Jinping during a call. Slovenia likewise has been the target of Chinese criticism, following its decision with the Taiwanese government to establish trade offices in each other’s territory. This China-sceptic shift is significant, not only because China’s sanctions on an EU member-state are themselves an obstacle to EU-China economic integration, but also because EU member-states’ support is necessary in the European Council for any EU-China agreement.

Likewise, the European Parliament (EP) presents an even greater obstacle to CAI ratification and more broadly to deepening EU-China economic relations. Following China’s sanctioning of several MEPs after their criticisms of human rights violations and forced labour in China’s Xinjiang region, the EP adopted a resolution blocking any talks on ratifying the CAI until sanctions are withdrawn. Prospects for China withdrawing such sanctions are small. Given that China’s sanctions came as a response to the EU’s own sanctioning of Chinese officials, China has insisted that the EU must move first before any Chinese sanctions are withdrawn. The CAI, therefore, seems unlikely to be approved in the near future, if at all. Indeed, though the resolution only related to the CAI, any further agreements between the EU and China are unlikely to attract much support from the EP, given the hardening political consensus against China.

What comes next for EU-China Trade?

As COVID-19 recedes, the situation will become more nuanced. Whereas the EU has opened up and loosened restrictions, potentially facilitating a return to the pre-COVID-19 trade paradigm, China’s commitment to the Zero-COVID policy – whereby sweeping restrictions are imposed to keep cases low – has perpetuated the stagnation. The conclusion of this policy might facilitate the resumption of business-as-usual for EU firms engaging in China. Yet such a politically contentious move seems unlikely to occur until after the 20th Party Congress later in 2022 (at the earliest), when Xi is expected to seek a third term.

Future progress in EU-China trade might be found in non-trade policy objectives (NTPOs), particularly in labour rights and in environmental policy. On the one hand, there have been some shifts facilitating a more positive business relationship between China and the EU. China’s legislature, the National People’s Congress (NPC) has expanded its commitments to eliminate forced labour, a long-standing area of dispute between China and the EU. In April 2022, the NPC ratified the two aforementioned fundamental ILO conventions which were mandated under the CAI. On climate policy, another area of dispute, China has also made efforts to meet EU demands. In March 2021, the 14th Five Year Plan committed China to a carbon emissions peak in 2030 and carbon neutrality by 2060. China has been progressing towards greater energy efficiency, particularly in expanding renewable energies as a share of its energy output.

On the other hand, on both these issues, significant challenges remain. Though there are deficiencies in the EU’s own enforcement of labour rights and climate policies, it is in China’s policies where the largest future disputes are likely to occur. On labour rights, a report from the European Parliamentary Research Service found that in China, guarantees of non-discrimination and equal pay are not systematically enforced, despite the relevant ILO conventions having been ratified. This suggests that even China’s recent ratification of the fundamental conventions may not necessarily resolve disputes about labour rights in China, as the key may instead lie in their implementation and respective progress made in this field.

On the environment, China continues to refuse to impose a carbon cap. Coal consumption has risen markedly in recent years, though Xi has pledged to end funding for coal projects abroad. Future EU criticisms of China’s coal usage might hitherto be less accepted by their Chinese counterparts, given the recent decision by some EU countries to reverse capacity controls on their own coal plants in the context of the ongoing energy crisis following Russia’s invasion of Ukraine. China is critical of the EU’s Carbon Border Adjustment Mechanism, viewing it as exporting costs of the climate transition towards developing countries.

On these NTPOs, progress could be made by ensuring greater compliance and enforcement on labour rights standards in China. On environmental policy, greater mutual understanding and dialogue would facilitate the development of policies and objectives which accommodate each side’s interests.  Indeed, improving dialogue is important to the future of EU-China trade relations. Communication between the two sides could be improved by developing an ‘effective early-warning mechanism’ to better address frictions between the two sides. One component of improving EU-China economic engagement should be the improvement of such dialogue mechanisms.

Yet, given the depth of political differences and the extent to which they have shaped economic engagement, dialogue alone cannot resolve differences. As COVID-19 recedes, these differences rather than the pandemic will become the main obstacle to deepening EU-China relations. Widening political divides between China and the EU are fundamentally precluding any deepening of ties, particularly regarding human rights, Taiwan, and the accompanying sanctions for each issue. Therefore, rather than giving way to greater engagement, this stagnation seems more likely to be prolonged as disputes continue to rise.

Facing these disputes and broader Chinese dependencies, DG TRADE proposed the EU follow a model of ‘open strategic autonomy’. This approach argues that the EU should pursue strategies which insulate the EU economy by bolstering domestic capacity in critical sectors and, crucially, diversifying external dependencies. Given the presence of other potential trading partners, such as the ASEAN countries, South Korea, Japan, and states in Latin America, diversifying dependencies seems a more plausible strategy than overcoming the profound political obstacles in EU-China relations. The deadlock of the CAI, originally intended to expand EU businesses’ access to Chinese markets, reveals a tension within EU political and economic goals and raises questions about future prospects of EU businesses operating in China. Looking ahead, the conclusion of the Zero-COVID policy and of the 20th Party Congress will allow for a further re-evaluation of future relations.