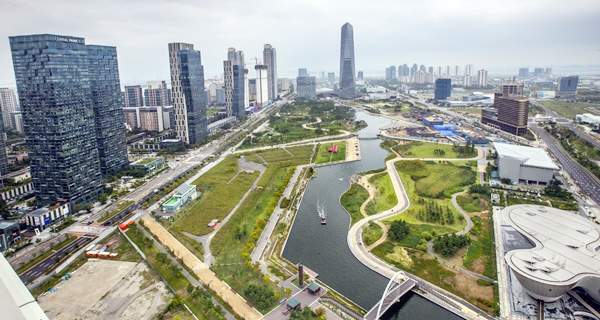 The crisis sparked by the COVID-19 pandemic turned out to be an inspiring one when considering green policies and sustainability. Many countries have welcomed recovery plans in response to the economic crisis emanating from the pandemic, prioritising economic reform and a more sustainable growth model. South Korea is certainly one of them. Immediately after his re-election in April 2020 − winning 180 seats in the Republic of Korea’s (ROK) National Assembly − Moon Jae-In announced the ROK’s commitment to pursue a green transition as a recovery mechanism from the pandemic. Such commitment was finalised in July 2020 when the Moon administration released the Overview of the Korean New Deal. The New Deal includes 10 major projects collected in 3 major plans: ‘The Digital New Deal’, the ‘Digital-Green Industrial Convergence Plan’ and the ‘Green New Deal’.

These three plans are majorly intertwined, with a key role assigned to digitalisation, as is the case in the South Korean ‘Green Initiative’ which promotes smart and green schools and industrial infrastructure. The most challenging and captivating aspect of the Green New Deal lies in the aim of the Korean government to pursue an impressive transformation of the country’s energy sector, announcing its plan to achieve carbon neutrality by 2050. This may, however, appear over-optimistic and perhaps overly ambitious taking into consideration South Korea’s reliance on fossil fuels, ranking 9th on the list of highest CO2 emitters in 2019.

Notwithstanding Korea’s fossil dependency, Moon’s government has launched an impressive plan to reform its infrastructure and transportation system, including the introduction of a carbon tax, the discontinuation of coal project financing, and the redesigning of South Korea’s urban scene through the inception of urban forests, recycling projects and promoting electric vehicles. Yet, this is not South Korea’s first step towards a sustainable revolution. The definition of the Green New Deal will thus be supported by existing policies such as the Eight long term Plan for Electricity supply and Demand, seeking to obtain a 20 percent electricity production share from renewable energy, working toward decreasing both nuclear and coal consumption by 2030. Moreover, the National Roadmap for Greenhouse Gas reduction, emended in 2018 but passed in 2016, has set the bar to reduce the output of greenhouse gasses by approximately 200 million tons by 2030.

If the Green New Deal is successfully implemented, its impact will be major. Until now South Korea’s energy sector has relied mostly on fossil fuels (such as crude oil, coal or natural gas), constituting 25 percent of the ROK’s total imports. The energy sector’s emissions represent a substantial risk for the environment and a major health threat. Another risk is derived from South Korea’s reliance on fossil fuels imports, making it highly dependent on foreign supplies, presenting a clear security risk. Many countries around the world, including South Korea’s trade and diplomatic partners, are taking action against polluting fuels and carbon consumption in particular, introducing taxation schemes to safeguard their climate security. In this international context it is both a necessity and an opportunity for the ROK to succeed in its transition, not only by taking up an active role but also becoming a leader in the fight against climate change. This strategy is not new, as already under the Lee Myun-bak administration (2008-2913) bilateral agreements have been pursued as a way to improve the ROK’s prestige and reputation. Hence, the presentation of the Green New Deal also offers an opportunity for enhanced Northeast Asian regional cooperation, as both China and Japan have announced similar plans. This could ultimately lead to enhanced economic reforms and further institutional cooperation in a region where climate security represents only one of many triggering challenges.

South Korea and the EU

Korea’s Green New Deal offers also the chance for the European Union for intensified collaboration, as the EU’s own Green Deal served as inspiration for the one promoted by the Moon government. In 2019, a second meeting of the ROK-EU working group on energy, environment and Climate Change took place, addressing the common need to lay out low-carbon strategies by 2050 and exchanging views on potential avenues to reach this goal.

Over the years, the EU and the ROK have forged a strong partnership, in which the area of education, science and technology, as well as Climate change are currently some of the most pressing matters to be addressed. With its Green Deal, the European Union stresses the need for global action in response to global challenges, deploying it also as a strategic diplomatic tool. Green diplomacy can thereby be re-defined and play a relevant role in the EU’s relations with the ROK. The preferential trade ties and strategic partnership between the two allies also stimulates the promotion of common values. South Korea is the EU’s eighth largest export destination, while the EU is South Korea’s third largest export market. The EU-ROK 2010 Free Trade Agreement was the first one of its kind signed by the EU containing a clear reference to Sustainable Development. Nevertheless, until 2018, the implementation of these sustainability goals had shown only limited satisfactory results.

The case of the EU-ROK FTA is not the only example lacking successful implementation progress. Despite the urgency for the international community  to enforce  sustainable trade measures and Sustainable Trade Facilitation, little headway has been made in regional or multilateral agreements in the Asia-Pacific to address this, in part due to a lack of awareness regarding the importance of such measures. With its 2014 Environmental Goods Agreement (EGA) the EU and 16 other WTO members pledged to eliminate duties and non-tariff barriers on products that contribute directly to sustainable development, green growth and climate action. In sequence to the EGA, and the respective EU and Korean Green Deals,  EU-ROK trade relations could be given a significant turn, while stepping up their cooperation in implementing and increasing awareness of Sustainable Trade Facilitation.