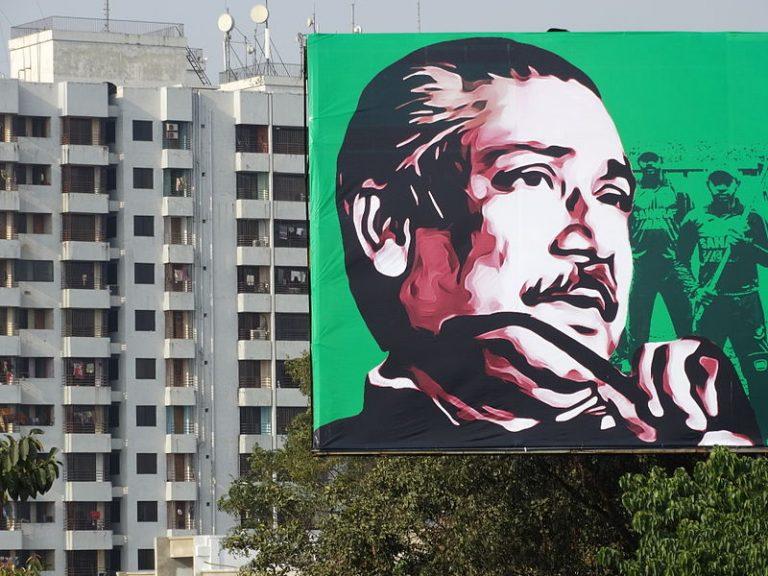 Sonar Bangla: How Sheikh Mujibur Rahman’s Dream for Bangladesh is Becoming a Reality

On the birth centenary of “Bangabandhu” Sheikh Mujibur Rahman, the international community has come together with Bangladesh to celebrate the ‘Mujib Year’. Once referred to  as a “Basket Case” by former US Secretary of State Henry Kissinger, Bangladesh has made substantial progress in its socio-economic development and solidified itself as a middle-income economy, largely thanks to its vast and profitable garment export industry. It has risen out of the shadow of its South Asian neighbours, India and Pakistan, to become the world’s second largest apparel exporter and is expected to overtake India in GDP per capita for 2020, whilst also meeting the criteria to graduate from the UN’s Least Developed Countries list. Naturally, much of the praise for this progress has been heaped on to Sheikh Hasina, Bangladesh’s longest serving Prime Minister, and orchestrator of the ambitious policies which have led the South Asian state to this point. However, to speak of Bangladesh’s current development would not be possible without mentioning the plight and struggle of her father, Sheikh Mujibur Rahman, who established the foundations on which Bangladesh lies today.

As ‘Father of the Nation’, he not only implemented changes in the social and political dynamics of the world, but above all, in the common people of Bangladesh who had struggled for independence since the partition of India in 1947, eventually leading to the formation of East and West Pakistan. At the heart of Rahman’s “Mujibism” was a more inclusive political ideology, which incorporated social justice, democracy, secularism and above all Bengali nationalism. Fitting to the name ‘Bangabandhu’ (Friend of Bengal), Sheikh Mujibur “loved the countrymen more than his own life” and “always fought for the political, economic and cultural emancipation of people”, as recounted by his former Private Secretary and Sheikh Hasina’s former Commerce Minister, Tofail Ahmed. Bangabandhu has played a pivotal role in Bangladesh’s journey for autonomy and independence. Whether it be the Bengali language movement in 1952 which eventually led to the implementation of Bengali as an official language, or the Awami League’s majority win in the 1970 general election that eventually led to the Liberation War (1971) and Bangladesh’s independence.

The circumstances out of which Bangladesh emerged, left Sheikh Mujibur with a society and economy in disarray after his release from prison in 1972. Yet, his proactiveness and undivided strive to improve and empower Bangladesh’s democratic infrastructure remains a blueprint for its leaders today. The day after his release, he issued the ‘Provisional Constitutional Bangladesh Order of 1972’, which outlined the infrastructure in which he sought to rebuild Bangladesh’s economic and social development.

A staple characteristic of his domestic policies was to empower marginalised groups, including women, farmers, and those in rural areas. He undertook programmes to boost agricultural production through rebuilding the industries’ infrastructure whilst also supporting an equal pay and support system for farmers. A new dimension in gender equality also became prevalent in Sheikh Mujibur’s tenure as the constitution made significant strides in gender equality, by ensuring steps to increase participation of women in all spheres of public life whilst also considering the socio-economic and cultural constraints faced by women in society. He also established the ‘Women Rehabilitation Board’ for the welfare of the women who had physically, mentally and economically suffered during the liberation war. This ethos of gender equality has now become ingrained into the political philosophy of present-day Bangladesh, as it ranks 7th in the world for political empowerment according to the World Economic Forum’s ‘Global Gender Gap Index’ report. It is also the only South Asian country to feature in the reports’ top 100 overall rating, ranking at 50. Whilst there remains room for further initiatives, the progress that Bangladesh has made over the past two decades cannot be undermined; it is now a prerequisite for new political parties to have at least 33% of all committee member positions filled by women in order to be registered, whilst in local government bodies, 30% of seats are earmarked for women. In terms of employment, the percentage of women as a part of the labour force has sustained consistent growth to 39% in 2020 and Sheikh Hasina has already pledged to increase this to 50% by 2041.

Whilst addressing the nation during the formal inauguration of the Mujib Borsho celebrations, Sheikh Hasina vowed to further build Bangladesh as her father wished for; ‘Sonar Bangla’, a prosperous nation free from hunger and poverty. Already we can see the effects of this vision, and Bangladesh’s improvement in human development. Infant mortality rate has sustained continued decline to now stand at 26 per 1,000 births compared to 40 in 2009, whilst the life expectancy has now risen to 72.6 years. Importantly, the population living below the national poverty line has dropped to 21.8% and between 2010 and 2016, 8 million people were lifted out of poverty. After having achieved various UN Millennium Development Goals in 2015, Bangladesh is on the right track to achieve the 2030 Sustainable Development Goals through the ‘Vision 2021’ and ‘Vision 2041’ initiatives.

Sheikh Rahman’s domestic education policy has also become intertwined into modern day Bangladesh. After he formed a national commission in 1972, led by Dr Kudrat-e-Khuda, to formulate an effective and progressive education policy for the nation, the commission published the first education policy of Bangladesh in 1974. However, after the assassination of Sheikh Mujib the country’s education system reverted to old ideals and infrastructure. Under the leadership of Sheikh Hasina, the National Education Policy 2010 has blended the liberalism of Kudrat-e-Khuda’s policy with the aspirations of modern Bangladeshis through making universal primary education up to the age of 8, as well as the introduction of compulsory subjects and improved tertiary education. The positive effects are clearly shown in the population as there is now a 95% literacy rate for those aged above 15 in 2019, compared to a 62% rate in 2007 and, in particular, secondary school enrolment for girls has risen from 40% in 1998 to 72% in 2018.

Bangladesh’s newfound prosperity is now provoking a changing image of the state worldwide. No longer is it merely seen as a country marred by poverty and floods, but rather as a key rising economy in the South Asian continent that has the potential to become a frontrunner. What is important going into 2021, is how Bangladesh recovers after the effects caused by both Cyclone Amphan and the COVID-19 pandemic. In April 2020, garment factories were forced to lay off 70,000 workers due to USD 3.5 billion-worth of clothing orders being cancelled or suspended and a plummet of 84% in exports that month. This year has made the need for diversification in economies clear in times of crisis and Sheikh Hasina has already announced aspirations for Bangladesh to become a global pharmaceutical hub, a sector which is expected to be worth USD 5 billion in 2023. What is apparent about Hasina’s Bangladesh is the remnants left by Sheikh Mujib’s time in office. For example, the ‘Cotton Development Board’, created in 1972, which now takes up a growing part of the government’s domestic initiatives, as it aims to produce 2 million bales of cotton by 2041. Likewise, the ‘Water Pollution Control Ordinance’, also devised by Rahman in 1973, led to the eventual Department of Environment. Now, a green economy has become an integral part of Hasina’s post-COVID plan not just for Bangladesh, but also globally. Bangladesh is currently presiding over the Climate Vulnerable Forum and she has frequently spoken out about the need for a combined global effort to curb the effects of climate change.

Having been voted the ‘Greatest Bengali of All Time’, it is evident that the legacy of Sheikh Mujib will remain timeless in Bangladeshi history. In Bangabandhu, Bengali citizens saw a leader who fought for peace and prosperity for his countrymen and viewed them as equals. It was through his years of struggle, persecution and eventual time in office that created the infrastructure which arguably would have been built on and progressed first-hand, if not for his assassination. During the 45th anniversary of his death this August, Bangladesh High-Commissioner to India Muhammed Imran assured that the people of Bangladesh would “turn the grief of his loss into strength”, and arguably Sheikh Hasina has taken up the torch of finishing what her father started. Whilst the task of Sonar Bangla may have been left unresolved after Sheikh Mujibur Rahman’s passing, the ideology of ‘Mujibism’ has persevered into modern times and enabled Bangladesh to be a role model of development for the world.