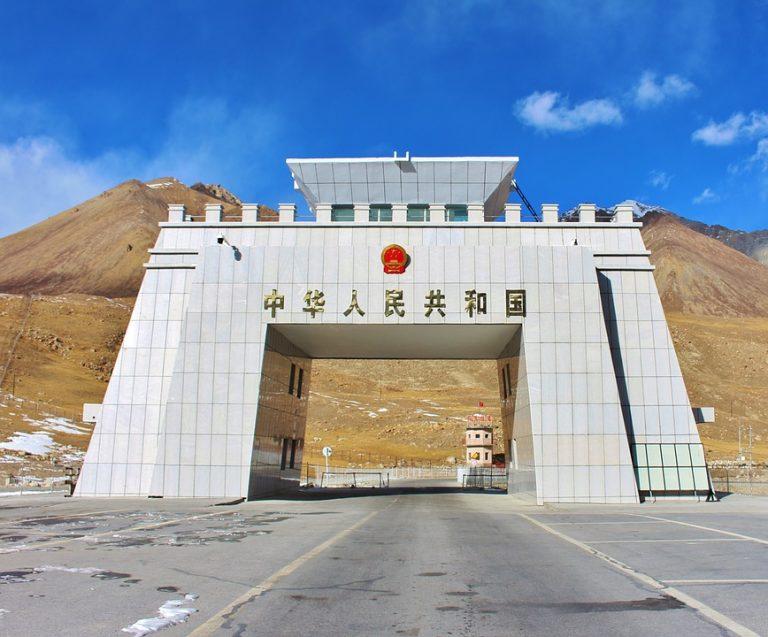 Rhetoric vs. Reality: SEZs under the China-Pakistan Economic Corridor (CPEC)

The China-Pakistan relationship is described as “higher than the Himalayas, sweeter than honey and stronger than steel”. Both sides trumpet CPEC (the China-Pakistan Economic Corridor) which is arguably the crown jewel of China’s Belt and Road Initiative (BRI). Behind the rhetoric of “win-win” cooperation, a sober analysis shows that this gargantuan task comes with a heavy political, social and economic price tag. With COVID-19 sharpening Pakistan’s existing hurdles, there is a need to jumpstart its faltering economy. Contesting a Financial Aid Task Force (FATF) grey listing, Pakistan is also tackling huge infrastructure and investment challenges. CPEC boasts the construction of nine official Special Economic Zones (SEZs), as well as one Free Economic Zone, Gwadar port. China is zealous to replicate and export its economically successful SEZs model around the world. Banking on maritime trade transforming struggling economies, Gwadar – as a multimodal transport hub – is CPEC’s most prized flagship. Despite losing momentum, exacerbated by COVID-19, both countries announced that CPEC would pick up the pace in March. China cannot leave its “all-weather friend” behind nor allow this important BRI example for the world to stumble and fall as this would tarnish President Xi Jinping’s and China’s overall image and standing. China is expecting to consolidate the BRI after the pandemic, seizing the initiative to persistently implement its plans to extend further its investments, influence and grip deeper into South Asia.

China seems set to convert its economic success into geopolitical influence abroad. Carving through Pakistan would reduce a 16,000 km route to 2,500 km, allowing 60% of China’s imports of oil and gas to bypass the contested waters of the South China Sea and the Malacca Straits. This dramatically shortened land route from Xinjiang to the Arabian Sea will also allow Chinese commodities and products easier access to the world’s markets. India, overtly hostile to the idea, fears encirclement from an emboldened Pakistan and in response has been reaching out to Iran through the Chabahar port as well as Afghanistan. The UAE, in turn, fears economic competition from Gwadar, while the US – with its increasingly strained relations with China – is reluctant to see Beijing potentially build a military port, near the already tense Strait of Hormuz. Seen through the security lens, the US and its regional allies (notably India and Japan), are wary of an assertive China using its “string of pearls” ports from Malaysia, Bangladesh, Sri Lanka to Pakistan. The prominence of CPEC is clearer when one observes the map of all the SEZs doting along Pakistan, stretching from Gilgit-Baltistan in the north to Baluchistan’s coastal edges in the south-west. However, Pakistan is not eager to become a mere transit corridor for intraregional connectivity from Central Asia to the Gulf. As it seeks a stronger role on the world stage, Pakistan wants to revive its economy by seeing direct financial benefit with arising job opportunities. For China, CPEC is a platform to become a key export-import player. 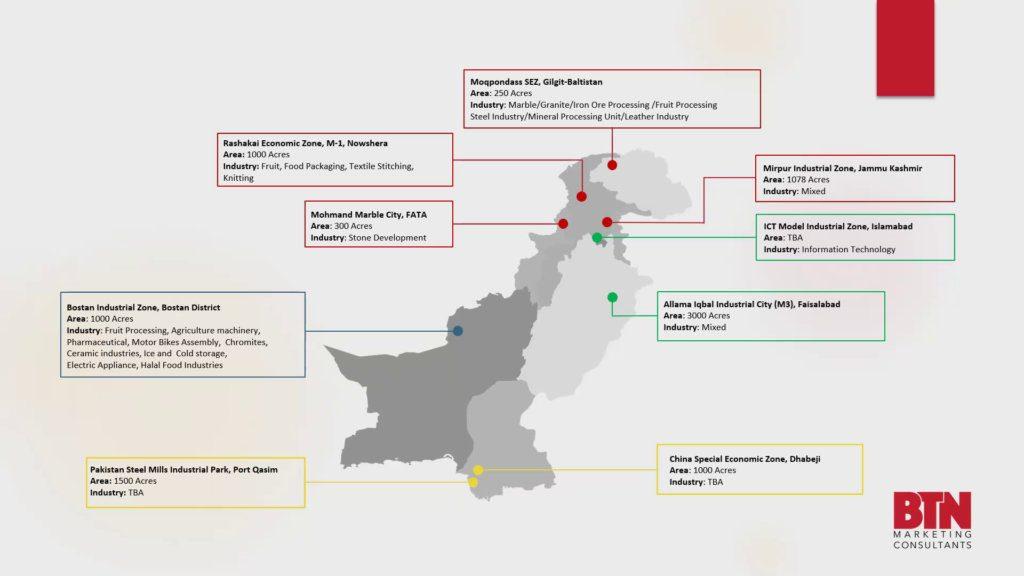 CPEC could potentially tap into Pakistan’s young demographic. 64% of the 212 million strong population are under 30, with 1.5 to 2 million looking for jobs every year. Pakistan’s honeymoon period began with hopes that CPEC would overcome the energy crisis, presenting job opportunities and promises of much-needed FDI. In the early 1970s both China and Pakistan were economically on par in the agriculture industry. Since its opening up in the late 1970s, China rapidly transformed from a poor agricultural-based economy, using SEZs to kick-start industrialisation becoming the globe’s second largest economy in 2010. With large-scale evidence that SEZs advance both GDP and FDI, Pakistan is willing to attain the same success from notable SEZs in China. For example, Gwadar will be based on the Shekou Industrial Zone in Shenzhen. With a focus on network infrastructure and agricultural development, new jobs are to be created. Gwadar has the potential to employ over two million people and generate billions for locals and foreigners alike. Pakistan seeks to attract foreign investment, to reassure investors that the image as a nucleus of violence and political instability is false. However, SEZs require certain conditions to thrive effectively. Even Shenzhen took twenty years to become a successful SEZ. Hence, it may take some time before Gwadar can flaunt economy-boosting credentials. For Gwadar to become a success story, a number of factors need to be present, including a stable political and socio-economic context, uninterrupted energy supply, good transportation links and a skilled labour force.

Although SEZs are suitable for developing countries with poor investment conditions, Pakistan lacks strong, central and efficient administrative and liberal economic policies from local decision-makers. CPEC-related decision-making is largely made by Chinese counterparts who often do not take local authorities and needs into account, thereby risking coming across as intimidating to potential domestic investors. Projects are being delayed, resulting in the cost of CPEC climbing (to over USD 60 billion). While the first few SEZs were announced in 2016, there was a period of stasis regarding the nine official SEZs which then refocussed to a significant few priority SEZs. In January 2020 Prime Minister Imran Khan inaugurated the second phase of CPEC with a primary SEZ Allama Iqbal Industrial City. Although the opening of another primary SEZ, Rashakai in Khyber Pakhtunkhwa, is expected to be launched by Xi Jinping this year, Pakistan must urgently first focus on upskilling its workforce to enable the SEZs to become fully operational. 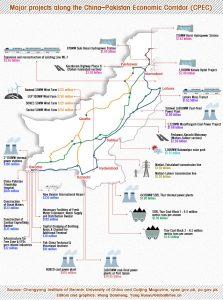 While Pakistan has risen up the latest World Bank Doing Business rankings by 28 spots from 136 (2019) to 108 (2020), a politically insecure environment has hindered Pakistan’s growth. Forging ahead, Pakistan will need to confront its current governance challenges, rising income inequality and over-reliance on the military – including business. This paired with an increase in national debt and devaluation of the rupee is concerning for Chinese investors. China’s Consul General in Karachi, Li Bijian, implied that Chinese companies are hesitant to invest due to the lack of political predictability, economic incentives and regulatory framework guarantees. The SEZs can become conduits of corruption if resources are misallocated to benefit the elite rather than the population at large. Although economic corridors serve to prevent economic enclaves from being exploited by multinationals, there are concerns that SEZs will become a tax haven monopoly for Chinese state-owned enterprises. Some argue that the government should consider adopting a bottom-up approach, empower local provinces to manage their zones and enable them to implement their own economic policies. Foreign investors must overcome bureaucratic obstacles and various layers of government, making barriers to investment. Combined with the presence of the military in Pakistani politics, with vested interests in the economy, this is proving unfavourable towards an open and welcoming investment climate.

While CPEC is advertised as a win-win situation for both countries, China seems to reap more of the gains. With CPEC costs rising, Pakistan risks falling further into a deeper whirlpool of debt. For example, the railway ML-1 project costs USD 9 billion and 90% of the funding originates from China in the form of loans. Critics describe this as an example of “debt trap diplomacy”. Despite promises of job opportunities, there have been private complaints of CPEC undercutting the labour market by hiring Chinese workers instead. Improving skills and creating jobs for Pakistani youth have so far not materialised. Locals, if hired, are in lower positions, often suffering major salary discrepancies. With Pakistan facing criticism for poor labour standards, there are concerns of workers’ rights from companies involved as SEZs regulations surpass existing labour protection laws. In short, analysts conclude that while CPEC is modelled to benefit Pakistan, in fact, most of the cash is flowing into Chinese hands. Local businesses have been given little opportunity to invest. Instead, Beijing rather provides incentives for Chinese banks and favours to present construction contracts to Chinese state businesses. The Pakistani military, which has strong business interests (from construction to owning land), is applying CPEC for profit and to further consolidate its already concrete position. Despite domestic pressure censoring any criticism of CPEC, on social media, some are voicing concerns about neo-colonialism with ‘foreign investment’ disproportionately benefiting China.

What can the EU do?

EU must move CPEC into its foreground. More attention should be drawn to the environmental cost that China will bring to meet Pakistan’s energy needs with coal-fired power plants. People and the environment will suffer especially when main cities are already severely affected by lethal air pollution dregs of diesel and petrol. Pakistan’s urge for economic recovery, such as meeting its infrastructure needs and providing skills and employment opportunities, notably in the digital sphere for its youth, is pressing. The EU should hence talk up incentives such as the Generalised Scheme of Preferences (GSP+), favouring lower-income countries with generous tariffs. Although the EU is now Pakistan’s largest export market, largely thanks to GSP+, soft power tools such as higher education opportunities could be multiplied. Without vying for competition, Pakistan’s large youth population is being enticed by China’s scholarships to study Mandarin. The EU could offer Pakistan viable alternatives. It should not linger and should speed up its engagement to invest in Pakistan’s governance capability. As the fifth-most-populous country, Pakistan could benefit from technology investment, such as tackling the omnipresent lack of fibre-optic cables nationwide. Before even thinking of conquering 5G, this is vital in view of the increasing importance of technology transfer today. If not, the EU risks paying a significant geopolitical price in the near future.

With guarantees of economic growth, employment and energy supply, Pakistan has eagerly welcomed China’s helping hand. CPEC critics claim that Pakistan could simply be a means to an end packaged as development assistance. The lack of transparency and failing promises of job opportunities from China’s side, along with the lack of transparency and poor SEZs regulation from Pakistan mean China will become the only true CPEC winner. Despite tax breaks and duty-free imports, SEZs cannot flourish without a full range of enabling conditions. Potential industries in Pakistan can only work in respective SEZs with resilient infrastructure, devolved autonomy and integration into the domestic economy in a stable political and security milieu. Pakistan needs to urgently address obstructive issues and challenges at home if it wants CPEC to bear fruit. If not addressed in time, Pakistan risks being pushed further into China’s embrace and may resent its increased dependency on its “Iron Brother” in the long run.