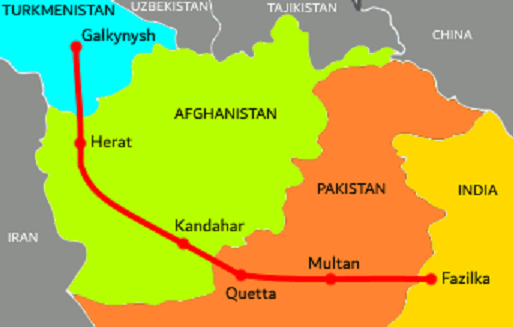 Review of Peace Pipelines: Safe Logistics of the TAPI Pipeline

The end of 2019 is well suited for the review of “peace pipelines”. Pakistan is one of the host countries of the Turkmenistan-Afghanistan-Pakistan-India (TAPI) pipeline which enables Turkmenistan to transport gas from the Galkynysh field through Herat, Kandahar (Afghanistan) and Quetta (Pakistan) to Fazilka (India). Pakistan also expressed firm support for the Iran-Pakistan (IP) pipeline, which enables Iran to export natural gas to Nawabshah in Pakistan. Both are called “peace pipelines”. Finally, there are indications that the peace negotiation between the United States of America and the Taliban will be reopened. Is it time to tackle the most unique challenge, i.e. safe logistics of the TAPI pipeline?

The concept of peace pipeline dates back to the Nagorno-Karabakh conflict. The discussion of pipelines have been inseparable with conflict resolution, and vice versa, since the 1990s. Yet to what extent have peace pipelines enabled unstable countries become stable? This question is difficult to answer without scrutinizing states’, militaries’, international organisations’ and oil companies’ practices. They consist of government-to-government agreements, host government-to-international consortiums agreements and company-to-company agreements such as Production Sharing Agreements. Gas transportation is materialized in accordance with these legal instruments and implementation by diverse actors during the operating process, i.e. from exploration through exploitation, transportation, storage and conversion of natural gas into municipal gas. A pipeline will not work independent of a long energy supply chain. Therefore, it is necessary to remove impediments from the chain, so that a conceptual peace pipeline becomes a practical conflict resolution apparatus. The most unique challenges of the TAPI pipeline, i.e. chokepoints in the energy supply chain are briefly examined below.

The first challenge is logistics. This is entirely due to the fact that land-locked countries’ stranded gas must be transported via high pressure pipelines toward their destinations. Theoretically, Turkmenistan can choose from the TAPI pipeline to South Asia, the planned Trans-Caspian pipeline and BTC pipeline to Western Europe or the Central Asian pipeline to East Asia. The entire exploitation process must be realized through investment agreements between host countries and investors, which assign responsibilities for construction, operation, maintenance, safety management and dispute settlement. The Asian Development Bank (ADB) assisted the finalization of the host government agreement and shareholders agreements between the governments and Turkmengaz (the operator of TAPI Pipeline Company Limited).

A future issue is that major petroleum companies are not participating in the project, even though the TAPI pipeline needs their technical knowledge to remove obstacles in each phase of the project. As an example, Yamal LNG and Yamal Megaproject are materialized in Yamalo-Nenets Autonomous District in northwestern Siberia (Russia). Back in 2000, there was no energy infrastructure on the Yamal Peninsula. However gas had to be transported either 100 km north to the Arctic Sea or 700 km south to other pipelines. Without logistics, gas will have remained land-locked. Therefore, Yamal LNG constructed the port of Sabetta as a logistics base. Since the site had no access routes either by land or sea, it was constructed primarily to bring in materials to construct plants and pipelines. Owing to the large-scale development, the port of Sabetta was already heavily used as the shipment port in 2018. In other words, Yamal LNG constructed the port for logistics, but it came to be used for exports.

This case shows that logistical chokepoints in isolated areas can be eliminated by building supply bases, routes and warehouses to send pipeline modules and materials. Later, gas may flow backward through the facilities as exports. Investment agreements will establish integrated gas transportation and spur foreign investments in megaprojects by specifying responsibilities for construction, operation, safety management, transit fees and dispute settlement.

The second challenge is the selection of a pipeline route. The TAPI pipeline is projected to be cross-border. The border between Afghanistan and Pakistan is called the Durand Line, and was drawn by a joint Anglo-Afghan commission in accordance with the Durand Agreement between Foreign Secretary of British India, Mortimer Durand and the Amir of Afghanistan, ‘Abd al-Rahman Khan in 1893. Afghanistan refuses to accept the Durand Line; nevertheless the TAPI pipeline must cross it. In addition, tribal/nomadic people have indigenous rights to lands and migratory routes and are often independent from the central government. It may be hard to involve these local communities in social programs proposed by the government. The safety of people and their livestock, protection of their rights to lands and the prevention of accidents are more important for them.

Thus, the Afghan-Pakistan border conflict faces two issues, i.e. the Durand Line and tribal people. The effect of the TAPI pipeline on conflict resolution is its raison d’être.

First, Afghanistan and Pakistan will continue sequential negotiations to combat gas spills as a technical necessity. The interaction between governments, companies and militaries could help de facto demarcation of their territory on a need-to-draw basis.

Second, tribal people may be systematically involved into a project. Oil companies established Health, Safety and Environment Management Systems (HSEMSs) following international standards to achieve safe transportation. To fulfil HSEMSs, they adopt, document, announce HSE policy and set up committees and designate personnel. Each company can select their preferred combination of provisions from international standards. Companies may involve regional representatives as members of the committee and must adhere to the principle of achieving safe transport by safe design and construction of facilities.

In conclusion, a peace pipeline will function as a built-in instrument in the supply chain, which perform multiple tasks as a conflict resolution apparatus. However, the governments’, militaries’, the oil industry’, contractors’, international organisations’ and local communities’ perseverance is necessary for logistical chokepoints to be removed. HSEMSs that are specifically designed for the TAPI pipeline will become the common denominator which connects the diverse actors by realizing safe logistics.

Mika Okochi is a Visiting Fellow at EIAS. She obtained a Diplôme Supérieur de l’Université from University of Paris II (Panthéon-Assa) in 1998 and is an associate professor of Tokyo University of Marine Science and Technology, Japan.