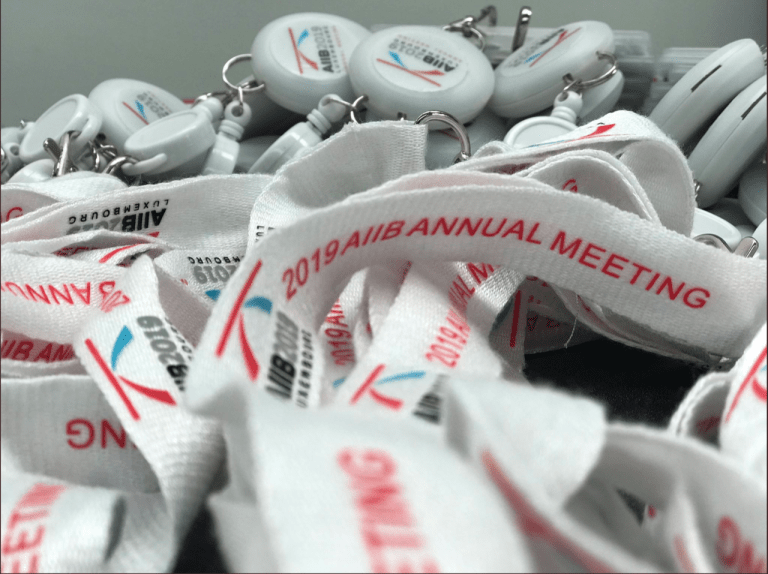 Notes on the 4th Annual Meeting of the Asian Infrastructure Development Bank in Luxembourg, 12-13 July 2019

The AIIB requires projects to be financially sound, green, and fit for purpose.

Digital infrastructure is moving up the focus ladder.

Dispute settlement is getting Asian coloured.

“Asia cannot sustain itself without working with other regions,” said President Jin Liqun in his opening speech. Although 75 per cent of the shares are held by Asian countries, the ambition to have a global reach was on display in Luxembourg where the AIIB held its fourth annual meeting under the theme of ‘Cooperation and Connectivity’.

If Europe is chosen for the first annual meeting to be held outside Asia, it is, according to Jin, because “the AIIB holds distinctively European characteristics,” thanks to European shareholders’ “prodigious contribution” to the creation of the bank. Luxembourg was the first non-Asian country to join even though, “It was not the easiest decision,” according to Prime Minister Xavier Bettel. The Grand Duchy, quickly followed by the UK and Switzerland, were duly acknowledged with ample visibility throughout the conference. More importantly, the UK got a vote of confidence when the AIIB listed its inaugural USD bond-issue on the London Stock Exchange, and Luxembourg was promised a listing of the AIIB’s EMTN programme.

In the meantime, the AIIB’s membership has reached one hundred as Benin, Djibouti and Rwanda tendered applications. AIIB members now collectively account for 78 per cent of the world’s population and 63 per cent of the global GDP.  That a hundred countries signed up for a new multilateral organisation is “a ray of hope,” said Luxembourg’s Finance Minister Pierre Gramegna who showed himself a splendid host.

Luxembourg is likely to get more business from the AIIB. It is a multilateral and financial hotspot. Nearly half of the population is from foreign origin. It is where the European Investment Bank is headquartered and more than a hundred banks from 29 countries have huddled up. It is the second biggest investment fund centre in the world with more than 5 trillion euros of assets under management. Surely, Luxembourg is glad to see the AIIB make efforts to make infrastructure finance a new asset class. Furthermore, a dedicated exchange for ‘green and social bonds’ makes Luxembourg a forerunner in sustainable finance and therefore an ideal partner for the AIIB which is guided by the mantra of ‘lean, clean, and green’.

Seventy-five years after the creation of the traditional Bretton Woods institutions, the AIIB wants to make a difference in the world of multilateral development banks. It is the first MDB where developing countries are the major shareholders. The bank has made innovations on mandate, governance, and business model. The main focus is on infrastructure but there is a wide latitude to move to other sectors. There is no concessional finance, nor is there a limitation to serve only developing countries. The AIIB is overseen by a non-resident board which allows a nimbler project approval process. The projects it takes on need to be financially viable because there is no intention to call on shareholders for recapitalisation.

A decent rate of return will make projects bankable and attract private investors. It will also help developing countries keep the sovereign debt sustainable. “Get value for your debt,” urged Martin Kimmig, AIIB’s Chief Risk Officer, “an infrastructure investment should increase the financial strength of a country”. Cost recovery through, for instance, an adequate tariff structure is hugely important to the AIIB. Private investors will want even more but, warned President Jin last year at the Mumbai annual meeting, “Getting projects implemented on schedule weighs more than a number of basis points. Bad design, lack of focus on resettlement of indigenous population, etc., can lead to projects being delayed. Then, even the wires will be eaten by the rats. Lawyers often do not understand that problems need to be solved.”

The legal flock may be less practically oriented than the AIIB’s President but they are not the only ones wanting to make a living out of project hiccups. Justin D’Agostino, a global dispute resolution practitioner, observed “Large infrastructure projects give way to large dispute cases. No one is happy except the lawyers. Now governments get increasingly interested in ‘the industry’ and see a business opportunity as a dispute settlement hub”. And so they did in a dedicated seminar. The AIIB Governor for Singapore, Minister Indranee Rajah, encouraged the AIIB to adopt the newly established ‘Singapore Infrastructure Dispute Management Protocol’ in its projects. Under the SIDP, a panel of experts including not just lawyers but also engineers and financiers would look into dispute cases and propose ways to resolve them in a timely and cost-effective manner. She also drew the attention to the signing in Singapore next month of the ‘International Convention on Mediation’.

For its part, Luxembourg also advertised its credentials and plans to play a bigger role in dispute resolution. Luxembourg hosts the European Court of Justice and is the “judicial capital of Europe” it was said. Notable absentee in the panel was a representative of the Hong Kong government who would have made a case for Hong Kong as Asia’s preeminent dispute settlement centre guided by its renowned ‘rule of law’ principle. An unfortunate coincidence since Singapore was given centre stage as the current vice-chair of the AIIB board, but nevertheless a dearly missed opportunity for Hong Kong at a time of need.

Whichever gets the advantage, Asia’s approach to dispute resolution is tilting towards a process of mediation rather than arbitration. Said D’Agostino: “Arbitration, while instrumental in international trade, has flaws, is slow, expensive, and difficult to enforce. In comparison, time and cost of mediation are much less. The Singapore convention presents a threat to the current system. If English law is still prevalent it is because the capital came from the London financial city, now the money comes from Asia. Asians are in control and reject the traditional western approaches. Dispute resolution will also move to Asian flavour.”

The AIIB’s aim to foster connectivity through infrastructure is not limited to the ‘hard infrastructure’ such as roads, ports, and power stations, but increasingly also takes in the digital kind which presently would get a mere 1 per cent of all infrastructure finance. Says Joachim von Amsberg, AIIB Vice-President, “There is a conceived wisdom, widespread even among the MDB community, that the private sector is taking care of investment in digital infrastructure. We as a newcomer take a fresh look at that and see that the digital is not that different, has financing gaps and policy elements.” Furthermore, the traditional infrastructure is also undergoing changes because of technology and the availability of big data: the space allotted to traffic systems in future smart cities will look different, in energy smart grids must be able to absorb renewable energy.

Technical innovation is driving the change and, again, Asia appears to take the lead. Whereas people in the US and in France still write cheques, in China and India payments and credit have been lifted to a whole new digital stage. The benefits are not just economic and convenience. Digital applications enable access to health and education services and are therefore essential for inclusive development. Digital can help mitigate the challenge of demographic ageing by keeping elderly longer in their homes and helping them drive more safely by not letting them drive but have them use autonomously driving vehicles.

The development of the digital economy is posing new challenges, the need for huge financing is one of them, but there is also need for fitting policies in areas such as taxation, regulation, data privacy protection, education, and security. One common feature is that the digital arena is inherently cross-border while the policy framework is still nationally fragmented. As a new multilateral institution with 100 countries around the table, the AIIB sees a need for the bank to assist the governments with these responsibilities.

Making the system safe looks like the most difficult task. “The next financial crisis will be triggered by a cybersecurity accident” said Pierre Gramegna, “It will block all e-commerce and financial flows”. What can the AIIB do about it?  One panelist suggested a simulation. Another said products should be designed with built-in security, and finance could foster that. The roll-out of 5G will soon see more and more systems to attack, not only by criminals. A graph showed that the number of nation state attacks is rising exponentially. Difficult to say who is behind it, governments are both victim and culprit. It is a transnational problem but, said Mamiko Yokoi-Arai, Head of Insurance at the OECD, “Governments still seem to be running around on their hamster roll rather than cooperate”.

The lack of cooperation among governments does not bode well for connectivity. Yet the problem becomes a matter of survival as the world population grows to 8 billion and the world economy undergoes big changes” said Professor Tria, Italy’s Minister of Economy and Finance. It requires above all goodwill and a sense of respect for the priorities of the partner countries, suggested Mohamed Maait, Finance Minister of Egypt. A co-financing project involving the AIIB turned Egypt from a state with severe electricity deficiency only five years ago to a net exporter.

And so, two full days of high level panel discussions had politicians and academics list the priorities and lament the slow progress. One lone manager of an operating company in the infrastructure industry described the matter in practical terms. Working across different countries, numerous technical and institutional constraints pose a challenge, but “one bottom line is the language”, said Chuan Chiao, Hong Kong based President, Asia Pacific at AECOM, one of the largest global infrastructure design and engineering companies. “Lost in translation happens on a day to today basis”. Surely “you mean from a legal point of view?” asked the moderator. Chiao: “All from the project point of view, how do you communicate effectively in a different culture”.

The message reminds that better connectivity can be worked on at personal level with minimum effort. For its part the AIIB shows a genuine will to engage with the other MDB’s for co-financing as well as for crafting common rules and standards. The bank ponders to initiate a working group with peer MDB’s on project preparation. Danny Quah, Dean of the Lee Kuan Yew School of Public Policy, National University of Singapore, hints that the ambition could be even higher. “We have had a six decades good run of multilateral inclusive rules based order. The AIIB comes in at a time that the traditional support for multilateralism is not as strong as it used to be. Now you get arbitrary use of power. The form of leadership for a new world is a work in progress. Whether it comes from the new emerging powers or from small countries getting together and exercising joint leadership in a new multilateral set-up remains to be seen”. In the area of global infrastructure, the AIIB seems determined to fit this higher purpose.