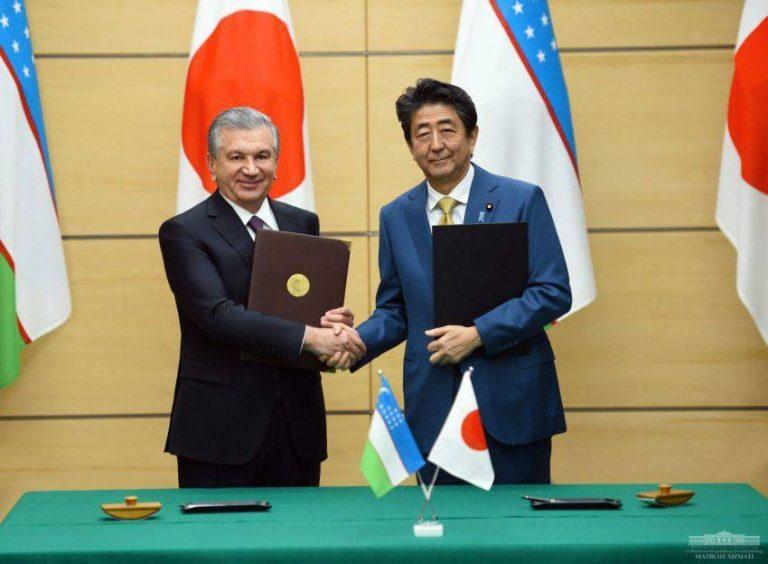 Note of Comment on the Visit of President Mirziyoyev to Japan

In terms of investment and cooperation in Central Asia, China’s Belt and Road Initiative (BRI) has dominated the economic landscape of Eurasia, largely overshadowing the efforts of other active parties. The enormous scale of the BRI commands the attention of governments, press circles and analysts alike. It is as such, an important challenge facing the leaders of the Central Asia states to maintain a multi-vector foreign policy and develop strong relationships with a diverse range of interested and active partners, particularly major economies like Japan.

Uzbekistan and Japan have enjoyed friendly relations since the former gained its independence in 1991, the latter was among the first nations to formally recognise this independence. Since then, numerous state visits have been conducted by the respective leaders of both nations. These visits have almost always resulted in progressively deeper cooperation agreements. In recent years, this has led to more than USD 4.1 billion worth of financial and technical assistance from Japan to Uzbekistan. As a result, numerous infrastructural developments in healthcare, education, energy, transport and telecommunications owe their existence to this funding.

It is with strengthening this important relationship in mind that President Shavkat Mirziyoyev conducted a three day state visit to Japan between 17 and 20 December 2019. The President was received by the recently ascended Emperor, Naruhito, and held talks with Prime Minister Shinzo Abe, government ministers and a plethora of senior business leaders and entrepreneurs. Japanese business has long known the potential for the Uzbek market. Indeed, Isuzu, the major Japanese commercial vehicle manufacturer, has been producing light-duty buses at the Samarkand Automobile Plant since 2007 and as of this year, has expanded this production capacity to include the company’s ‘D-Max’ line of pickup trucks.

In keeping with a new tradition established in bilateral state visits between these two nations, President Mirziyoyev and Prime Minister Abe adopted a new official agreement, the ‘Joint statement on further deepening and expanding strategic partnership’, which covers many areas of infrastructure and international cooperation, building on the foundations of previous declarations. A further USD 3.5 billion of financial and technical assistance was agreed with the Japan International Cooperation Agency (JICA) and President Mirziyoyev invited Japanese entrepreneurs to visit Uzbekistan and see for themselves the opportunities Uzbekistan has to offer to foreign investors.

This was yet another successful state visit and relations with Japan continue to grow. The signing of the joint statement and the significant investment it contains will create new and enhance existing infrastructure, that will improve the lives of Uzbek people and promote stronger business and cultural connections between the two countries. It is important for the stability of the region that China is not perceived to be the only viable source of foreign investment and cooperation. The BRI is undeniably the most significant economic project in Central Asia and there is no doubt that it offers enormous potential, nevertheless it is important to keep the door open to other partners and prospective friends. It is simply good governance to plan for the future and diversification of not just the economy, but also of partners in international cooperation is a sound method of achieving this. In Japan, Uzbekistan has established a strong bond and this visit has only served to strengthen these ties.