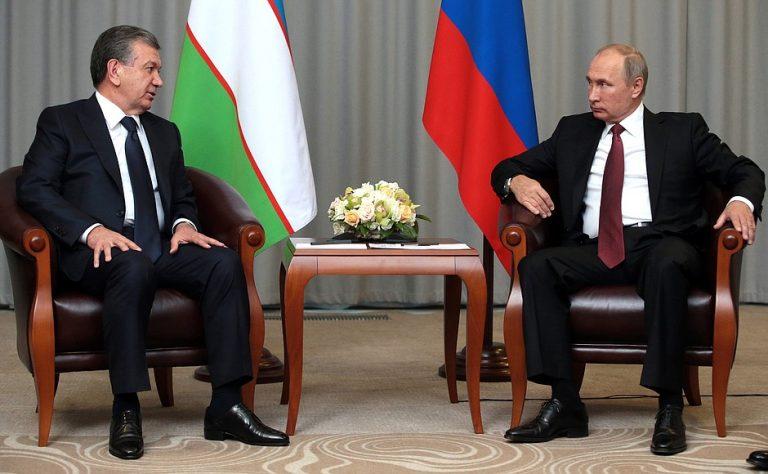 On October 18 and 19, Russian President Vladimir Putin conducted a state visit to the Republic of Uzbekistan at the invitation of President Shavkat Mirziyoyev. This will be President Putin’s first official state visit to Uzbekistan since Mirziyoyev took office two years ago. With Uzbekistan being the first country Putin visited after his first election as President of Russia in 2000, it bears a deep symbolic meaning for the strengthening of current Uzbek-Russian relations. The visit seeks to renew the bilateral talks conducted in Qingdao, China, on the sidelines of the heads of state meeting of the Shanghai Cooperation Organization (SCO) last June. On that occasion, the two Heads of State reaffirmed their strong commitment to the strategic partnership between the two countries, praising the efforts of either party in the development of joint projects on energy, agriculture and farming.

During his visit to Uzbekistan, President Putin is expected to participate in the ground laying ceremony for a new nuclear plant and attend the first edition of the Joint Educational Forum and the Uzbekistan-Russia Interregional Cooperation Forum. This renewed cooperation between the two countries is expected to be compounded by additional projects. Included amongst these are the Economic Cooperation Program 2019-2024 and the Cooperation Program in Cultural and Humanitarian Spheres 2019-2021, a program that is to be complemented by the establishment of several operational branches of Russia’s top universities in Uzbekistan.

Since President Mirziyoyev came into power, patterns of interaction between Uzbekistan and Russia have dramatically developed, touching several areas of engagement. Despite the indisputable advantages that a normalization of Russian-Uzbekistan relations offers, some pundits point out that tighter relations between the two countries could jeopardize Uzbekistan’s role as the main promoter of cooperation between Central Asian states, independent from the influence of traditional external powers in Russia and China. Nonetheless, Uzbekistan is pursuing a multi-vector foreign policy, striving to maintain an equal distance from all centres of global power. This approach is characterised in the various bilateral meetings President Mirziyoyev has held with leaders from Central Asia, the United States, China, Russia and the European Union.

As the country opened to the world, Uzbekistan and Russia’s interests started to converge in several fields of action. The main area of cooperation between the two countries remains the energy sector. Russian giants Gazprom and LUKoil are playing leading roles in the development of Uzbekistan’s oil and gas projects. Only last year Uzbekistan concluded an agreement with Russia for the construction of a pipeline and a refinery that could go a long way to solving Uzbekistan’s occasional fuel shortages.

Economic cooperation, including, but not limited to the energy sector, is the focal point of current Russian-Uzbekistan relations. With Uzbek economic migrants in Russia peaking at two million people and representing a reliable source of remittances for Uzbekistan, President Mirziyoyev seeks to enhance bilateral coordination in order to improve the working conditions of the Uzbek nationals that have migrated to Russia.

Lastly, on the issue of military cooperation, President Mirziyoyev is moving towards an approach that seeks to develop closer ties with Russia. Although Uzbekistan left the Collective Security Treaty Organization (CSTO) in 2012 due to disagreements over the deployment of Uzbek armed forces under foreign command and the establishment of foreign military bases on the country’s territory, Uzbekistan and Russia recently resumed joint military manoeuvres and agreements on the technical modernization of the country’s military, which heavily rely on Russia’s high-tech weapon technology. Last week, Russian and Uzbek Defence Ministers signed an agreement on the mutual use of their respective airspace by military aircraft from either country. Uzbekistan has also recently resumed sending military personnel to be trained at army colleges in Russia – an arrangement that had been ended in 2012.

With both countries standing to gain a lot to from the maintenance of improved dialogue on economic and security concerns, it does not come as a surprise that the main goal of Uzbekistan’s new presidency is to normalize and foster Uzbek-Russian relations. Whether Uzbekistan will be more willing to join Russian-led initiatives such as the Eurasian Economic Union or the CSTO however, remains to be seen. In any case, it is hoped that the commitment Uzbekistan displays in ensuring high levels of cooperation between Central Asian states will benefit from mutual exchanges with one of the key players in the region, thus developing a strong system of regional cooperation among equal partners.