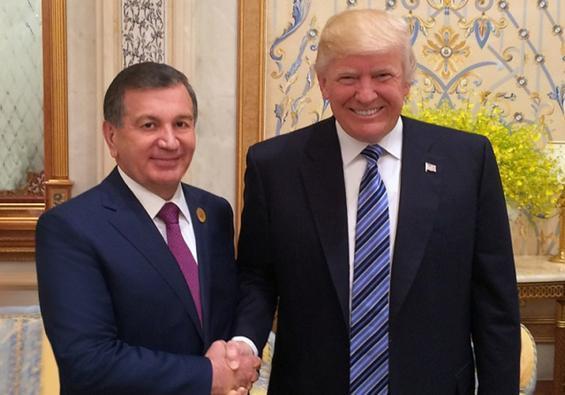 Note of Comment on President Mirziyoyev’s Visit to Washington

From 15 to 17 May, Uzbek President Shavkat Mirziyoyev will embark on a historic trip to Washington, where he will, among others, meet with President Trump to revive and infuse a new momentum to their bilateral strategic partnership.

Despite being geographically far away from Central Asia, the United States has an important stake in a stable, secure and well-connected Central Asia. To this end, the US very much supports recent efforts by Uzbekistan to spearhead regional integration and cooperation, and has actively participated in recent Uzbek-led initiatives such as the high-level International conference “Central Asia: Shared Past and a Common Future, Cooperation for Sustainable Development and Mutual Prosperity” held in Samarkand last year and the Tashkent Conference on Afghanistan held in March. Indeed, thanks to the new foreign policy activism of President Mirziyoyev, old regional problems (many inherited from the Soviet era, such as border demarcation issues and the Aral Sea disaster) can be constructively discussed and resolved in an environment of trust.

From Uzbekistan’s perspective, its multi-vector foreign policy entails, first and foremost, to strengthen ties with the other Central Asian Republics, but without denying the importance of links to regions and countries beyond the immediate neighbourhood such as the US and the European Union, which can be very important partners in fields ranging from trade, investment, education and new technologies in the context of Uzbekistan’s economic modernisation and diversification.

Following the attacks of 9/11, security dominated America’s approach to the region, as it saw the region primarily through the lens of stabilization efforts in Afghanistan. Yet, in recent years, US has adopted a broader, more comprehensive outlook on the region. While some analysts foresaw a danger of a gradual US disengagement from the region following the troop withdrawal from Afghanistan, through its New Silk Road Initiative announced in 2011, the US sent a message that it was attaching a great importance to the development of economic connectivity projects as the basis for regional stability and security, even if the project itself was not successful due to lack of endorsement at the highest level. In 2015, the C5+1 platform was initiated as a platform for regular dialogue between US Secretary of State and his counterparts in Central Asia. Although no meetings have taken place under this format during the Trump presidency, (former) Secretary of States Rex Tillerson met with the foreign ministers of the Central Asian Republics in the sidelines of the UN General Assembly meeting in New York last September.

Furthermore, there is great scope for greater coordination of policy approaches, projects and actions between the EU and the US in Uzbekistan and Central Asia, notwithstanding the greater role military and security considerations play in US foreign policymaking vis-à-vis the more normative, economic-oriented EU agenda. Careful attention will need to be paid to the alignment of their policies with Uzbekistan’s Development Strategy for 2017-2021. As the European Parliament resolution of 13 April 2016 on the implementation and review of the EU-Central Asia Strategy notes, more practical cooperation links can be established between the EU and the US as well as joint projects carried out in the fields of environment, education, private sector development (and in particular Small and Medium Sized Enterprises as the engines of growth, job creation, innovation and competitiveness), climate policy and border management “in order to improve effectiveness and jointly reach a wider public”. It is hoped these considerations will be taken up in the new EU Central Asia Strategy currently being drafted and which will be ready in 2019.

Uzbekistan and the broader Central Asian region are witnessing the rapid construction of hard infrastructure (roads, railways and pipelines) in the context of ambitious intra-regional connectivity initiatives such as the Belt and Road Initiative, the Uzbekistan-Turkmenistan-Iran-Oman corridor or the Turkmenistan-Afghanistan-Pakistan-India pipeline (which Uzbekistan recently agreed to join during the visit of Turkmen President Berdimuhamedov to Tashkent). At the same time, there is also a great need to strengthen the soft infrastructure in the region – the regulatory frameworks to simplify, standardise and harmonise cross-border trade procedures – and where EU (through the Border Management in Central Asia (BOMCA) Programme) and US expertise in this domain can be very helpful.

Special emphasis should also be made on education cooperation. In Uzbekistan, approximately 60 percent of the population is under the age of 25. As Uzbekistan modernises its economy and moves up the global value chain towards higher value-added sectors (such as knowledge-intensive services, ICT and finance), the young generation needs to acquire the skills relevant to the 21st century labour market and the emerging industries in the country. To this end, the EU and the US are actively increasing education exchanges with Uzbekistan. The Tashkent campus of Webster University will be inaugurated this September (becoming the first American university with a branch in Uzbekistan), adding to the EU universities already active in the country such as Westminster University and Turin Polytechnic. The EU and Central Asian Education Ministers, furthermore, have met twice since regular meetings were initiated in 2015. The above initiatives will raise the profile and standards of the Uzbek higher education landscape, enhancing and enlarging the career options for Uzbek graduates. This is fully in line with the 2017-2021 Development Strategy which explicitly calls for “improved quality and effectiveness of higher education institutions through the introduction of international standards of training”.

Lastly, the Uzbek government is implementing trade and investment facilitation measures and opening the economy to foreign investors. This is a process that is expected to accelerate as Uzbekistan has begun negotiations to join the World Trade Organisation, with technical assistance form the United States. While American companies like Boeing, Hyatt and John Deere already have a presence in the country, there is still plenty of scope for new investments across a wide range of sectors: renewables, energy efficiency, water management; and other sectors where American and European companies and SMEs possess world-class technological expertise.

To conclude, regardless of Trump’s unconventional, inward-looking and highly protectionist approach to world politics, alienating allies near and far in the process, realities in the ground are bringing US and Central Asia closer together, regardless of who holds the office in the White House. It is hoped that the present US administration will not miss the opportunity to become a credible and constructive actor in Uzbekistan and Central Asia in line with the objectives and priorities of the Uzbek government and its people.