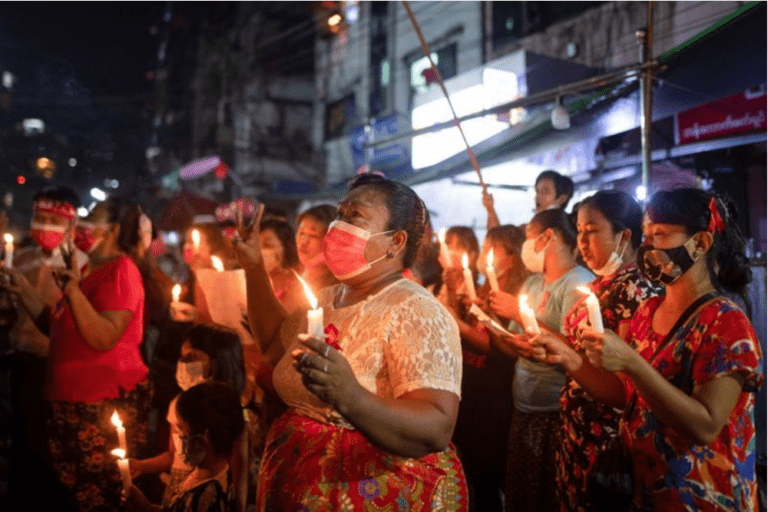 Myanmar’s future is back on the line: The fight for democracy

In the early hours of 1 February 2021, in a series of raids, State Counsellor Aung San Suu Kyi, President Win Myint, exponents of the National League for Democracy (NLD), activists and journalists were arrested in a military coup that is seriously endangering Myanmar’s already fragile democratic apparatus.

In the early days after the military coup, a “Civic Campaign for Disobedience” was launched across the country.  Initially, it started with boycotts, people lighting candles on the main buildings and strikes launched by professional workers – such as the one announced by doctors of 70 hospitals across 40 cities. Since just a few hours after the military coup, social media have been filled with red flags, NLD pictures and the three fingers salute as a sign of protest against authoritarian regimes. At first, it seemed that dissents on social media were keeping people away from protesting in the streets. However, the announcement by the military junta to shut down the internet has brought hundreds-of-thousands of protestors to take the streets across Myanmar. On 6 February 2021, almost 10.000 people were demonstrating in Yangon and protesters seem ready for other several weeks of protests. Interestingly, these mass protests are raising parallels with the 8888 uprisings in 1988. At that time, similarly to the present days, hundreds-of-thousands of people took the streets to protest against the military regime. This time, however, the fight for democracy is driven by the “digital generation”. Teenagers, students, and civil society that have been hoping for a democratic transition over the last five years are now relying on the internet and social media to coordinate their protests and spread information with the international community.

Monday 1 February 2021’s crackdown centred around the November 2020 parliamentary elections. On 8 November 2020, amid COVID-19 health-restrictions and voting cancellations in Rakhine and Shan states, over 25 million people – 70% of the population – cast their vote. Results seemed unmistakable. The National League for Democracy (NLD) won 396 of the 498 contested seats in parliament, not only gaining much more than the 322 needed to govern but also obtaining nine more seats than during the 2015 elections, which had already registered extraordinary popular support for the NLD. The elections’ results were celebrated at home and internationally as a testimony of the democratic transition promoted over the last decade.

While the results marked a meaningful victory for the NLD and Aung San Suu Kyi, they came as a severe defeat for the Union Solidarity and Development Party (USDP) and the armed forces of Myanmar (Tatmadaw). Since 2008, the Tatmadaw has consented to some signs of democratic openness, notably political reforms, the transition to a civilian government initiated in 2011 and the 2015 elections. Without a doubt, these concessions were accurately planned in a way that the Tatmadaw could remain in power. The 2008 constitution, for instance, appoints a quarter of Myanmar’s 664 parliamentary seats to the army and demands at least two-thirds of the seats for the NLD to have a winning majority and form a government.

This fragile political compromise seemed to stay afloat after the 2015 elections, but the recent NLD landslide victory might have gone a step too far for the Tatmadaw’s political ambitions. Already in the last few weeks before the elections, the military claimed – without providing evidence – that there were more than 10.5 million cases of “potential fraud, such as non-existent voters” and called on the election commission to publicly release the final polling data. A week before the coup, a military spokesperson warned it “would take” action. The threat of military intervention prompted international leaders, including the UN Secretary-General to voice concern and the military walked back its warning, saying the media had misinterpreted the general’s comments.  After 1 February’s events, it seems that the Tatmadaw’s words had not been misinterpreted after all. Exactly when the NLD should have officially begun its second term in office, the military launched its military coup, arresting Aung San Suu Kyi and President Win Myint, while holding politicians in an “open-air detention centre” for two days.

Reactions from the International Community

Following the military coup, the International Community immediately condemned the events. This included the UN-led condemnation with UN Secretary-General Antonio Guterres declaring that developments were “a serious blow to democratic reforms”. The US’ incoming administration also condemned events with the US Secretary of State Antony Blinken calling the military leaders “to respect the will of the people of Burma as expressed in democratic elections on Nov. 8”. European leaders and institutions were also quick to condemn the military coup. On Monday, 1 February 2021 the EU Council called on the military to release the people who had been “unlawfully detained”, while “strongly condemning the coup”. Denunciations also came from the EU’s High Representative Josep Borrell, European Commission President Ursula von der Leyen and President of the European Parliament Davide Sassoli. Later in the week, despite an initial refrain from China and Russia, the UN Security Council also issued a statement expressing “deep concern at the declaration of the state of emergency” and “support of the democratic transition in Myanmar”.

Myanmar’s neighbours reacted as well, when amongst others the ASEAN Chairman issued a statement on 1 February 2021, declaring that the ASEAN community was “closely following the current developments”, recalling the principles of democracy and human rights enshrined in the ASEAN Charter. Clearly, due to the principle of non-interference, ASEAN declarations were much more cautious than the Western condemnation of the events. The QUAD members (Japan, Australia, India and the US) also expressed concerns over the developments in Myanmar with India’s Ministry of External Affairs and Australia’s Prime Minister urging the military to respect the rule of law and the democratic process. Interestingly, Japan’s condemnation of the events came a few hours later than the other members of the QUAD. For some, Japan’s slow reaction may have been caused by the high number of Japanese companies currently operating in Myanmar.

Another country holding tight relations with Myanmar, closely watched by the international community, is China. Despite long-standing relations between the two countries, these improved under the NLD government. China has become Myanmar’s first trading partner and one of its largest sources of inward investment. Since the democratic transition, Chinese investments in Myanmar have exponentially increased, notably resulting in  last year’s signature of 33 bilateral agreements that included rail and deep-sea port projects along with the China-Myanmar Economic Corridor.  The first official response from the Chinese Foreign Ministry spokesperson Wang Wenbin was that they “noted what happened” and were “learning more information on the situation”. Later in the week at the UN Security Council, China made its position clear, stating that it will refrain from any open criticism of the events, and only to support actions that will contribute to Myanmar’s political and social stability, avoiding escalation of the conflict and complicating the situation.

The situation in Myanmar is evolving on a day-to-day basis and in the next few weeks developments of three crucial situations need to be observed. Firstly, the evolution of the “Civic Campaign for Disobedience” and mass protests that are heightening. Since a few days after the coup, the blocking of the internet has been lifted and social media have quickly returned to serving as the main window of contestation. Secondly, the forthcoming political moves of the commander in chief Min Aung Hlaing and the military junta. On 8 February 2021, Min Aung Hlaing addressed the nation for the first time since the coup declaring that the commission had failed to investigate fair elections in November 2020, promising new ones to be held. The commander in chief also declared that his rule would be “different from the past” and that he will support a “true and disciplined democracy”, declarations that have, in only a short time, reinvigorated dissent on social media. Thirdly, the international reaction. The International community is closely following developments in the country, as public dissent and protests seem to be escalating. Probably soon, countries will discuss the possibility of imposing sanctions on Myanmar. This would not be an unprecedented scenario for the country. Already in the 1990s and early 2000s several states, including the US, imposed wide trade sanctions. However, these economic embargoes mostly proved unsuccessful and, as the past experience holds, they would risk to adversely affect the population instead of the military junta. On the contrary,  the civil society and activists seem to be calling for arm embargos and targeted sanctions on Tatmadaw owned companies. It is to be seen if the international community will take this route and how the situation will evolve.

As a final reflection, the NLD and the role of Aung Sun Suu Kyi should also be brought into the picture. In the last couple of years, the controversial figure of the NLD’s leader has significantly changed the game in Myanmar’s politics. Aung San Suu Kyi’s reluctance to discuss ethnic minorities’ rights and to speak out on the Rohingya crisis has brought “The lady” in disgrace, both on the international scene and internally. Notably, a multitude of minorities in Myanmar had started to criticise the NLD’s reluctance of discussing the issue of ethnicity with the Tatmadaw. Instead, Aung Suu Suu Kyi had kept bringing more political-related issues onto the agenda, such as constitutional reforms. On 1 February 2021, the military seized power in an unquestionable illegitimate attack to the already fragile Myanmar’s democratic apparatus. Mass protests and public dissents are growing, but they may not be enough.

In order to ensure a peaceful resolution to the situation, mediation with the military junta will be needed at some point in the near future. Given that the people of Myanmar are seemingly refusing to come to terms with the military, an important role could also be attributed to the international community to defuse the situation. Differently from the past, Myanmar is now much more integrated into the global economy, and a return to economic sanctions would severely damage Myanmar’s precarious development process, as well as its international partners. Exclusion from the global economy would risk to severely disrupt the achievements that the country has reached in the last years of democratic transition. Min Aung Hlaing likely does not wish for Myanmar to move backwards either, as even relations with China, a key partner for Myanmar, had greatly improved under the NLD government.

In this regard, on 11 February 2021, the European Parliament adopted a joint motion for a resolution on Myanmar. Following the condemnation of the military coup, the EP has called on the European Commission to launch an investigation on the Generalised System of Preferences (GSP) and to consider the possibility of suspending trade preferences with Myanmar. Significantly, in line with civil society requests, the EP has stressed the importance of targeting the Tatmadaw and military-related businesses. Accordingly, the EP has prompted the EU, its Member states and EU-businesses to refrain from any activities that may benefit the military economically. In this sense, the EP calls on the Council to amend the Everything but Arms (EBA) Initiative and to review the possibility of an arms embargo. However, what Myanmar would benefit from most right now is an international community that acts as a mediator. In contrast, wide economic sanctions would be detrimental to the country and its people. This shows that there is certainly some leverage for the EU and the international community, if only it seizes it wisely.