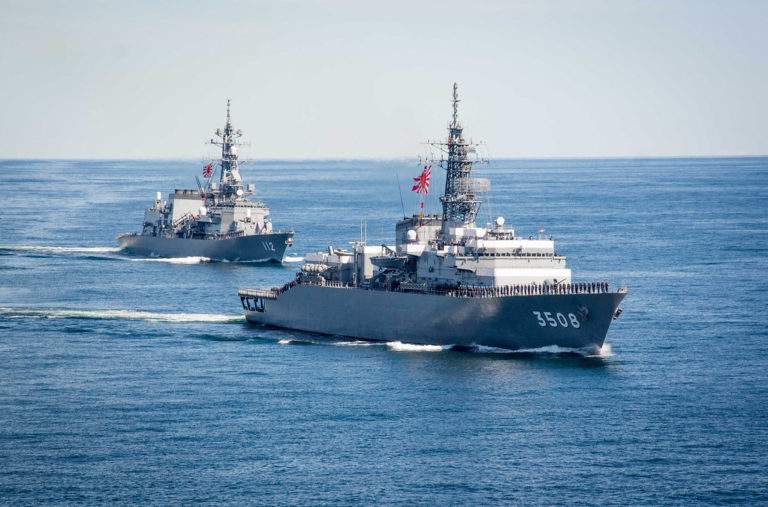 Japan and the militarisation of East Asia

Japan, caught in between North Korea’s growing ballistic and nuclear armament on one side and China’s rising power on the other side, finds itself increasingly isolated in an ever more confrontational environment. These existential perils are deeply rooted and have pushed Tokyo to act, raising the Japanese defence budget yearly since 2014. After coming to power, Prime Minister (PM) Yoshihide Suga has continued the expansion of the military budget to a record 5.4 trillion yen (JPY) (USD 51.6 billion). Yet experts and the wider public remain uncertain of whether this military expansion is sufficient to deter Japan’s adversaries should it really be threatened. As a major player in the pivotal Indo-Pacific region, Japan’s response and future plans to ward off these threats are important to understand not only for states in the region but also for the European Union and other global powers.

Japan’s unconditional surrender to the United States after the atomic bombing of Hiroshima and Nagasaki radically changed Japan’s relationship with its armed forces. Ever since, Japan’s constitution would be one based on Pacifism and its armed forces limited solely to perform defensive actions.  While originally the United States never intended for Japan to develop any significant armed forces, Cold War realities and the breakout of the Korean conflict forced the US to actively encourage Japanese rearmament. This development remains controversial in Japan, with many disagreeing with the broad interpretation, in recent years, of Article 9 of the Constitution and others believing that the Constitution itself should be modified.

It could be argued that Japan’s military expansion is a reaction to two main external factors. The first being North Korea’s development of nuclear weapons and ballistic capabilities, which poses an existential threat for the Japanese people. Second, China’s overwhelming economic might combined with its increasing investment in the People’s Liberation Army (PLA). Not only does animosity still remain between the two countries over Japanese war crimes during WWII,  there are also rising tensions over sovereignty of the Senkaku/Diaoyu Islands. Furthermore, should China increase its control over the East and South China Seas and become  the regional hegemon, it could cut off Japan’s vital maritime lanes of communication, something that would threaten its very existence. Moreover, Japan is increasingly isolated in the region, with historical tensions with South Korea, also dating back to WWII (comfort women), territorial disputes with Russia over islands to the North of Japan, and recently Tokyo’s traditional ally, the United States becoming increasingly isolationist under Trump’s Presidency. However, since Biden took over the presidency, this has already changed. The JSDF expansion falls under the framework of Japan’s Indo-Pacific Strategy, “Japan’s effort for a Free and Open Indo-Pacific”, published by the ministry of Foreign Affairs of Japan. This strategy has four main aims: promoting maritime order, securing connectivity across the Indo-Pacific, enhancing governance and ensuring maritime security and safety.

How is the JSDF expanding?

The leadership of PM Shinzo Abe, legislation for Peace and Security that came into effect in March 2016, combined with updated guidelines for US-Japan defence cooperation, have set a precedent for Japan to become more of a regular ally and the JSDF more of a conventional defence organization. Most notably Japan’s Peace and Security legislation included a statement providing it with the right to exercise collective self-defence.  All this has translated into a radical expansion of the operational scope of the JSDF. Furthermore, the Medium-Term Defence Program (2014) established that air and maritime supremacy is a prerequisite for effective deterrence and response to various situations. In this context, the improvement and expansion of the JASDF and the JMSDF on the grounds of self-defence is legitimized under Japanese law, despite some criticism at home and abroad.

In terms of physical capabilities, the JSDF has experienced budgetary increases since 2014 and is expanding all of its branches.

Japan, together with the US, is developing its anti-ballistic capabilities, such as Aegis-equipped warships, in order to counter the North Korean threat. Japan is also building nuclear shelters and purchasing equipment to purify the air and eliminate radiation and poisonous gases.

To counter the perceived Chinese threat, Japan’s strategy is to achieve sea-air supremacy in order to oppose any potential aggression before PLA forces reach Japanese territory. With this aim in mind, Japan is investing in the quantity and quality of submarines and destroyers, while also developing new types of ships such as surveillance submarines.  Furthermore, the helicopter destroyer JS Izumo and its sister Kaga are already being converted into light aircraft carriers capable of operating F-35B jets, and are expected to be operational in 2022 and 2025 respectively. Moreover, Japan’s anti-submarine warfare capabilities remain strong.

The JASDF is also expanding by acquiring more aircraft and developing its own advanced stealth fighter, the Mitsubishi X-2 Shinshin. It is also undergoing organizational improvements and has built itself a considerable amount of experience in intercepting Chinese and Russian aircraft in Japanese airspace, making it a strong force.

Japan is also investing in the JGSDF, focusing on its amphibious capabilities and mobile platforms. Examples of these investments are the improvement of both the Type 96 Armoured Personnel Carrier and the Assault Amphibious Vehicle. The JGSDF would act as a last resort line of defence, if the Air-Sea supremacy strategy were to fail, giving Japan the ability to retake remote islands from Chinese occupation.

Repercussions on the global stage

According to William Braton, China has already won Asia’s arms race. Most of Asia’s countries may have decided that any response to China’s growing military would be futile. This is understandable considering the fact that China already spends more than all of the rest of Asia combined on defence and that South East Asia and other countries are dependent on Chinese infrastructure investment. However, some of these countries do not trust or sympathise with China, but fear opposing the economic giant. In this context it is expected that Japan’s military expansion, despite the development of offensive capabilities such as light aircraft carriers, will be seen by most Asian countries as an effort to protect a free and open Indo-Pacific, as opposed to an attempt of projecting Tokyo’s influence across the region. Furthermore, former Prime Minister Shinzo Abe dedicated a lot of political capital to improving Japan’s diplomatic ties and soft power in the region.

In East Asia, Japan and South Korea, despite not having the best relationship historically, have a lot in common when it comes to security, especially with regards to North Korea. Therefore a strong Japanese military does not directly oppose the Republic of Korea’s interests. Nevertheless, many South Koreans view Japan’s constitutional reinterpretation as a return to Japanese militarism.

China sees Japan as somewhat provocative, with acts such as the visit by PM Shinzo Abe in 2013 to the Yasukuni Shrine, where Japanese soldiers, among them some war criminals, are honored. He repeated this visit just days after stepping down as Prime Minister in 2020. This is seen by many in China and in South Korea as a nod to Japanese imperialism. According to Nicholas Khoo, China, having grown immensely in the last decades, sees the status quo as the country’s unstoppable growth and influence spreading across the Indo-Pacific and beyond. In this context, the PRC perceives an intent in Japan of containing China, and by doing so changing the status quo. “China correctly understands that Japan will challenge a potential Chinese bid for a regional sphere of influence.” Therefore, China´s recent assertiveness is an attempt of maintaining the status quo, not changing it. Furthermore, Chinese Foreign Ministry spokesperson Zhao Lijian, argues that China has always followed the path of peaceful development and pursued a good relationship with its neighbors. Therefore Japan’s rearmament is unlikely to deter China’s progressively aggressive behaviour, it might even encourage it.

European countries such as the United Kingdom, Germany and France are increasingly interested in the Indo-Pacific. Around 10% of their trade passes through the South China Sea. Therefore, securing its openness and safety is vital for their respective economies. If China were to dominate the region it would make Europe even more reliant on Beijing. A free and open Indo-Pacific is also desired by Japan, therefore greater Japanese military presence is likely to be welcomed by Europe. European states themselves are already starting to conduct military exercises in the region, some of which together with Japan. Furthermore, according to Christopher Penot, France’s recently appointed Indo-Pacific ambassador, “ensuring the development of a multipolar region is very important” and Japan will be welcomed as one of those poles by most in Europe.

The EU-Japan Strategic Partnership Agreement (SPA), for many, signified a close partnership to act as guardians of the rules-based international order. However, it has arguably not achieved its full potential, and cooperation on the security front between the two powers can still be greatly expanded. Given the current geopolitical circumstances of the region, the publication of the EU´s own Indo-Pacific Strategy and the plan to publish the “EU Strategy for Cooperation in the Indo-Pacific” in September, a great opportunity for further cooperation on the security front between Japan and the EU has arisen. Nevertheless, how the European Commission and the European External Action Service will make the most of it remains yet to be seen, but it is clear that a strong EU-Japan security partnership would have a great impact in the region.