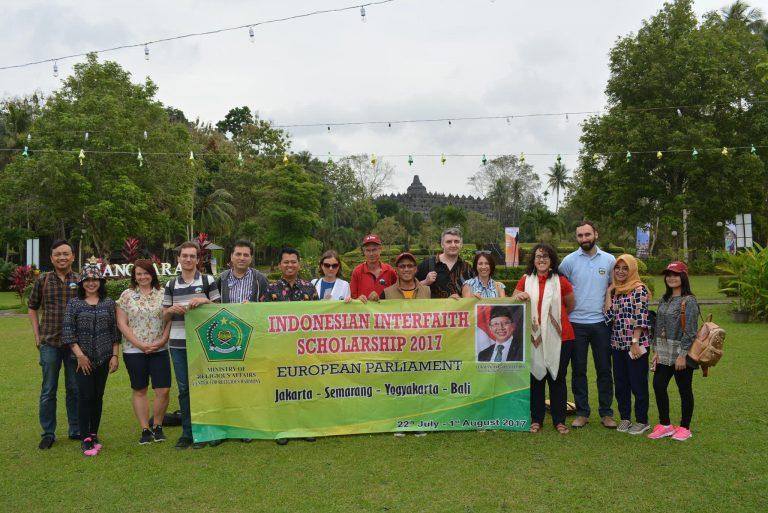 Insights from the 2017 Indonesia Interfaith Scholarship

From 23 to 31 July, EIAS Programme Coordinator Mr Alberto Turkstra participated in the 2017 Indonesia Interfaith Scholarship funded by the Ministry for Religious Affairs of Indonesia. The week-long tour included meetings in Jakarta with the EU Delegation, Ministry of Foreign Affairs, Ministry of Religious Affairs and the Indonesian Parliament. Other cities visited included Semarang, Yogyakarta as well as Bali, where representatives from different faiths, as well as academic and religious institutions, were held. Below are his reflections:

“Nowadays, Europe seems dominated by a climate of fear, mistrust, mutual suspicions and misunderstandings which has given rise to populist parties promoting a “us vs them” mentality, scapegoating religious and ethnic minorities for the woes of the continent. Indonesia, on the other hand, has long been regarded as the poster child of pluralism where different faiths co-exist peacefully and harmoniously, despite being one of the most diverse countries in the world. Indonesia and the EU share almost the same motto – Unity/United in diversity – but in Indonesia this unity is much more palpable in the day-to-day reality than in Europe. Hence, one of the main rationales to participate in this study tour was to observe and learn how Indonesia manages the complex relationship between religion, state and society which Europe so much struggles with.

Scrolling through some of the Indonesia news headlines in the weeks prior to participating in the 2017 Indonesia Interfaith Scholarship, however, threw some surprisingly negative headlines: many related, but not limited to, the implications of the Ahok case for Indonesia’s model of tolerance, the growing impact of hardline Islamic groups such as the Islamic Defenders Front (FPI), the intrusion of less tolerant forms of Islam into Indonesia and the exploitation of religious sentiments by political elites in the lead-up to the 2019 presidential election: “What Explains rising Islamism in Indonesia”; “Should we worry about Islamism in Indonesia?”; “Why Indonesian extremists are gaining ground?”; “Indonesia has been mercifully resistant to extremism—until now”; “The Rising Tide of Radicalism Threatening Indonesia”; “Indonesia’s Moderate Islam is Slowly Crumbling”; “Indonesia: A nation’s tolerance on trial”; and “Pluralism in peril: Is Indonesia’s religious tolerance under threat?”, to give a few examples.

Of course, good news is no news, and, as we were often reminded through the trip, the smallest of problem can be blown out of proportion (and frequently out of context) by the media. Today’s media landscape has created a hotbed for the rapid spread of “post-truth” sensationalist headlines; this acquires greater importance if we consider that Indonesia is host to one of the world’s largest numbers of Facebook and Twitter. Furthermore, some of the problems highlighted are certainly not unique to Indonesia: the forces of globalisation have generated conditions favourable to the development and intensification of inter-cultural and inter-religious tensions.

Re-reading the above-mentioned articles after the completion of the study trip, they seem to fail to capture the strength of the Indonesian societal system which has successfully managed internal conflict and addressing social issues peacefully. There are plenty of examples we have witnessed during this trip conducive to creating an atmosphere of harmonious and peaceful life in a pluralistic society. For all the talk of radicalisation, Indonesia has for instance been largely immune to ISIL recruitment, with the numbers of Indonesian foreign fighters in Syria largely the same as Belgian citizens (which has almost 25 times less the population of Indonesia).

The Indonesia Interfaith Scholarship allowed us to meet with a wide range of representatives and stakeholders from various ministries and religious groups, from Jakarta to remote villages in Bali to witness first-hand the inter-religious cooperation and harmony at work. There was no denying about the challenges faced, but Indonesia has long been accustomed to living in a multicultural, multi-ethnic, multi-religious and plurilingual nation, the pillars of its identity and its stability, and the Indonesian model of tolerance rests on very solid pillars which are (largely) immune to sporadic episodes of instability and intolerance, otherwise quite normal in a plural, open vibrant democracy and a country with hundreds of ethnicities, languages and six official religions.

During our field visits and meetings it was made clear to us that Islam in Indonesia is very different from Middle Eastern Islam, less rigid, less Arabized, more moderate and accommodative, compatible with modernity, plurality and democracy, the active participation of women in society, and a robust civil society (exemplified by Mohammadiya and Nahdlatul Ulama which form the backbone of civil society in Indonesia); but this certainly does not make it a weaker or watered-down version of Islam (“Islam with a smiling face”, as someone pointed out).

One of the most prominent examples of inter-religious harmony in practice was finding houses of worship of different religions built side-by-side, such as the St Mary of the Assumption Cathedral and the Istiqlal mosque in Jakarta, facing each other; and the Puja Mandala complex in Bali, housing five places of worship. In the case of Jakarta, we were introduced to the concept of parking diplomacy, which entails that the cathedral parking area for motorcycles can be used by the Muslim community during the main prayer on Friday, likewise for the mosque premises which can be used by Christians for the Sunday Mass at the Cathedral, as well as during other important celebrations such as Easter or Christmas. The location of these two temples serves as a powerful reminder that in Indonesia the coexistence of major religions is a reality and widely accepted.

Meetings at the Ministry for Religious Affairs, Foreign Affairs Ministry and the Indonesian Parliament served to familiarise ourselves with the principles guiding religious life in Indonesia, centred around Pancasila, and the spirit of unity in diversity enshrined in the 1945 Constitution which ensures freedom of religion for all. Intercultural, inter-religious  and bilateral interfaith dialogues, are all powerful tools for prevention, mediation, combating intolerance and extremism. Nationally, every one of the 34 provinces is host to a religious Harmony Forum. Indonesia, as a leader in inter-faith dialogue, also as a strong mandate to promote it abroad. It holds many bilateral inter-faith dialogues, including with Singapore, Myanmar, Fiji and Australia in the immediate neighbourhood; as well as regionally and multilaterally (through the United Nations Alliance of Civilisations, for example). Indonesia is bidding to become a non-permanent member of the UN Security Council for 2019-2020 with an agenda strongly focus on human security, peacekeeping and peacebuilding. Indonesia, as a living model of tolerance and pluralism, can benefit from UNSC membership to promote these values in its interactions with other members of the international community.

The meeting at the EU Delegation in Jakarta threw some light on how the EU sees Indonesia as a role model regionally and globally. To this end, last year, Federica Mogherini announced an exchange programme for religious scholars and leaders. Concerns were expressed concerning growing religious conservatism in Indonesia; the emergence of hard-line Islamic groups; radical teachings in public schools; the politicisation of religious factors in the context of the recent Jakarta government elections; the losing grip of Mohammadiya and NU vis-à-vis radical Islamic minority groups; the role of social media (with its huge penetration and amplification effects through which radical messages can spread easily and quickly); the spreading of radicalisation to well-educated, middle class Indonesian and the situation of the Ahmadiya, banned from proselytising their faith.

Other meetings such as those with scholar Holland Taylor and at the Jesuit school in Yogyakarta, served to contextualise how Islam, Christianity and other religions had been introduced in Java and Indonesia at large, and how they had adopted local characteristics and traditions in the process. For instance, we learnt that the motto “Unity in Diversity”, its origins can be traced to a 14th century Buddhist poem, and that Java established freedom of religion in 16th century – earlier than any other country or region. It was interesting to learn that Indonesia is the only country where Confucianism is considered a religion (as opposed to a philosophy) and the only country where Hinduism is a monotheistic religion.

As the trip advanced, we were introduced to other initiatives that increase interaction between members of different religions, because, as the saying goes, “he who knows one religion knows none”. The Indonesian Consortium of Religious Studies, in cooperation with Christian and secular universities, has a programme with an inter-religious flavour, in which students are able to work under two dissertation supervisors, one Muslim and one Christian. In a village in Karangasem regency (Bali), where Hindus and Muslims peacefully live side by side, we were explained by local leaders some of the initiatives taken by Muslims to better integrate with Hindu neighbours and incorporate local Balinese traditions, including having versions of the Quran written in Sanskrit, and giving Balinese names to new-borns.

A valuable lesson is that harmony can never be taken for granted, but has to be fought for every day. As we heard numerous times during our trip, especially at the grassroots level, people have a tacit agreement to solve disputes at the local level without resorting to authorities, avoiding the escalation of small problems. In order to preserve harmony in society, it is crucial that the recognition of religious freedom and pluralism prevails; as well as mutual respect, interfaith tolerance and mutual cooperation. Religion in day-to-day, public life and politics is and will remain extremely important. This, Indonesia shows, is fully compatible with an open and vibrant civil society. It is clear that despite the challenges faced, the scholars and policymakers we met agreed that there is no need to change radically the Indonesian political system. Religion is both a political and social element and hence the basis for statehood; and the power of the five Pancasila principles is strong enough to overcome any fractures in the system.

I come back from Indonesia significantly more optimistic than in the days prior to departing after having read the above-mentioned articles. Indonesia is gracefully endowed with a very rich spiritual-religious capital and it is hoped it can assist and offer some valuable lessons to the EU in tackling extremism, radicalisation and other related challenges.”