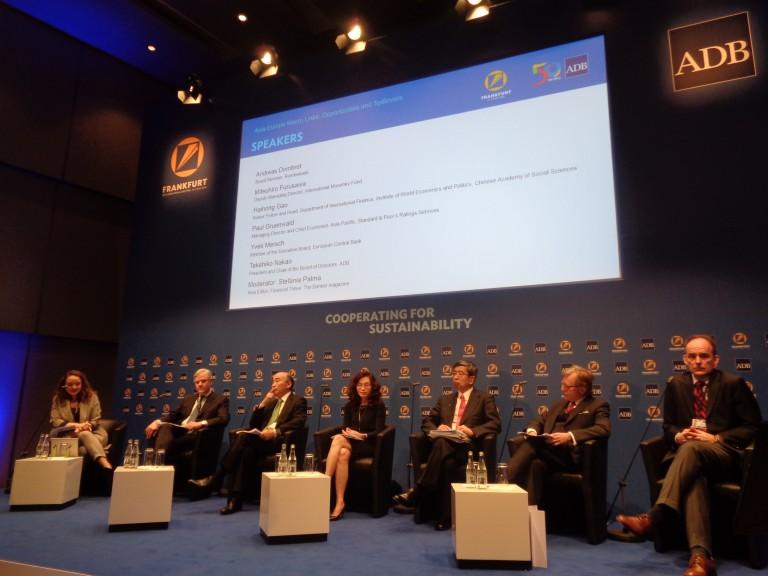 Insights from the 2016 ADB Annual Meeting

Some very interesting remarks were made by Mr Yves Mersch, Member of the Executive Board of the European Central Bank, during the 2016 ADB Annual Meeting in Frankfurt (Germany), that EIAS attended, being represented by Mr Axel Goethals, CEO, and Mr Erik Famaey, Senior Associate.

According to Mr Mersch, the spillover effects over the past years and the inability to shield national economies in a globalized world have set the base for creating strong monetary policy cooperation. In order to see the details, overseeing each national central bank’s mandate is important, such as where it derives its legitimacy. Different central banks mandate the consequence of historical growth – that is considered as legitimate from an objective perspective. Given this environment, it is hard to foresee the perfect coordination due to the need of tailoring each issue. In terms of efficiency and efficacy, it is cumbersome to move to a different situation from where we are now. For this reason, engaging with the high-level dialogue that has been going on with all the international organizations, such as the IMF, should be continued. Yet, a smooth process and harmonious outcome cannot be foreseen. What is notable is the major central banks’ challenge-accepting attitude towards the crisis – they have started setting up cooperation (e.g. swap lines), which is highly necessary. In the further extend, broad policy dialogue should be pursued with perseverance.

The mandate of the central bank, whether it is broad or narrow, depends on the legislation, those making the legislation and the expectations of the electorate. This is the reason why most of the mandates of central banks are inward-looking; directed to have the best economic welfare for their political jurisdiction.

For Chinese investors it has been a learning curve to operate in different regions with different histories, which determine their cultures, the way to conduct business, the work ethic, relationships with government officials, etc. Europeans have learned from foreign Asian investors, and it is mutually beneficial and can be seen as a logical consequence of globalization.

In order to put Europe in a sustainable growth path again, structural reform is highly desired – labour market reform, institutional reform,  and the banking market. Europe now has a single resolution and single deposit guarantee to fulfill the European banking norms. What remains a problem is the legacy liabilities and the high amount of non-performing loans that resulted from the crisis.

The question for Europe is how to carry out the structural reform: should it adopt a gradualistic approach, in order to preserve the maximum of its functioning democracy; or is it better to take a shock therapy approach? This discussion is taking place in different countries. Another question is to ask how to perform the best with more efficiency in this continent, both at local and national levels.

Another area where  Europe’s structural weakness is revealed is having too much bank finance resulting from the existence of numerous Small and Medium Sized Enterprises (SMEs), which need to be complemented by larger companies with cross-border activities and with access to the European capital markets union. Indirectly, this would also be a way to share risks in the single market across borders. This is the agenda to build Europe on a sounder basis.

Having binding monetary policy cooperation is very difficult. But what is the cost of no coordination? Looking at this in the area of macroeconomic surveillance, the cost is believed to be 7 percentage points of growth per year because of insufficient coordination of economic policies.

Asia has an interest in the EU integration process and has been trying to implement some initiatives – there are worldwide about 80 countries which have regional financial arrangements (such as the Chiang Mai Initiative). It is very helpful to exchange information taking into account regional differences, also in terms of economic development that predetermines the capacity to integrate. So far, the exchange between Europe and Asia is quite fruitful.