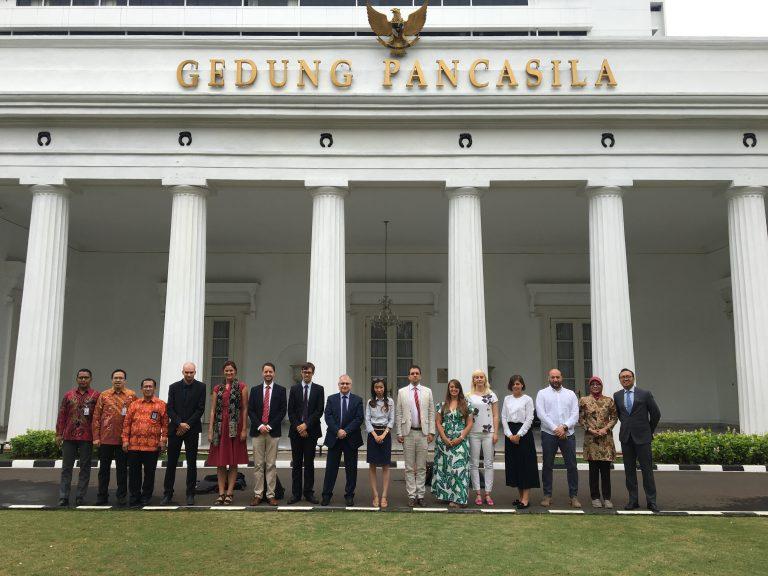 “Unity in diversity,” the Indonesian national motto, is in line with the European Union’s values. Mutual understanding and tolerance are basic principles that have a significant potential to solve global threats.

Islam, Protestantism, Catholicism, Hinduism, Buddhism and Confucianism. Six religions are officially recognised in Indonesia where people have throughout the ages lived side by side and mingled in their daily lives despite their differences in beliefs. In Puja Mandala in Bali, a Hindu temple, a mosque, a Buddhist pagoda and a Catholic and Protestant church have been built in a single compound. Symbolizing the official endorsement of the concept of inter-religious harmony, the site is a unique place of pilgrimage for people of different faiths.

“Puja Manadala is a source of national pride,” explain religious leaders speaking on a collective capacity. “Our national motto – Unity in Diversity – comes to life here. We believe there should not be any competition between religions as this would only divide us.” The power of religious elites to influence widely their own groups’ ideas, practices, and values is an essential element of diplomatic efforts. As advocates for peace and harmony, they regularly hold dialogues aiming at creating tolerance, mutual understanding and respect among communities.

“As the third largest democracy, Indonesia is one of our most natural and deep partners in the region,” said Charles-Michel Geurts, Deputy Head of the EU delegation office in Jakarta. The promotion of inter-cultural and inter-religious dialogue in Indonesia is in line with the EU’s objectives and values to promote peace, equality, dignity and Human Rights. Indonesia, where almost 90 per cent of people are Muslim, “proves the compatibility of Islam and democracy. Indonesia is a very tolerant, moderate and open country. However, the model is in full tension due to risks of radicalisation. “There is a need to empower moderation inside,” added Charles-Michel Geurts.

A rising tide of Islamism has been a noteworthy phenomena to emerge in the country over the past 20 years that threaten both the unity and security of Indonesian people. Although religious tolerance is deeply locally rooted, issues of rivalry are undeniable. Historical experience worldwide demonstrate that religion has, and will continue to, play a central role in political life and be an important contributing factor in violent events. Ethnicity, culture and religion are influencing aspects in Indonesian politics, increasing risks of political discourses combining religious and ethnic hatred.

A representative of the Ministry of Religious Affairs underlines that “we do not deny our current problems and we need to intensify efforts to face our challenges,” insisting on the fact that “we are not a theocratic state.”

The Indonesian Contribution to the World

Challenged by the penetration of radical ideology as a worrying trend for Indonesia and the world, academics and scholars examine ways of managing religious and cultural diversity. At Universitas Gajah Mada, they are working on an early warning system that inform on security levels in real time and provide insights on preventing conflict. “There is no conflict we can not prevent,” said Professor Jazilus Sakhok. “We have to work on it long before it becomes a conflict.” A professor at the State Hindu University focuses on the necessity to integrate different ideologies “by emphasizing common purposes: goodness, humanity, integrity and social justice. We want to promote mutual understanding and preserve the unique heritage from particular cultures.” Education, research and public discussion become increasingly important tools for those who seek to promote religious harmony and tolerance.

Mr. Holland Taylor, chairman and CEO of the International Institute of Quranic Studies, explains that “it is very natural and human for any of us to believe that we come from the right side.” Social groupings based on religious identity is a phenomenon of human civilization and the potential of religion as a tool to address confrontation should be maximised. “Indonesia does not seek to export its model – as any context is specific to pre-existing conditions – but a methodology.” In that sense, Holland Taylor argues that “Muslims and non-Muslims need to join forces to defeat extremism. The general public in Europe do not understand the wide range of Islam but instead sees it in black and white. This generates additional layers of problems. In Indonesia,” he says, “we have a better knowledge of the moderate Islam and its deviant forms. In Europe, there is a need to gain a better understanding of an Islam that is syncretic with European values.”

As a multi-religious and pluralistic nation-state, Indonesia emphasizes its internal factors – such as the middle-path Islam and inclusive nationalism – as strategic components to face global threats. If religion and its divisiveness could be a source of political instability, the Indonesian vision and aspirations for cultivating constructive conversations provide the necessary guidance for populations of different backgrounds to address and prevent confrontation.

Interfaith dialogue and cooperation can unlock the power of religious traditions to inspire communities and maintain peace and harmony in our modern societies.

From 6 to 15 August 2018, EIAS visiting fellow researcher Mrs. Cindy Cao participated in the 2018 Indonesia Interfaith Scholarship organised by the Center for Religious Harmony of the Indonesian Ministry of Religious Affairs in partnership with the Indonesian Embassy in Brussels. In Jakarta, Yogyakarta and Bali, she met and discussed with officials and representatives from the EU delegation in Indonesia, the Ministry of Foreign Affairs, the Ministry of Religious Affairs, religious sites and universities. The delegation included EU officials from the European Parliament and European External Action Service as well as a wide range of stakeholders from the academic, trade, health and press sectors.