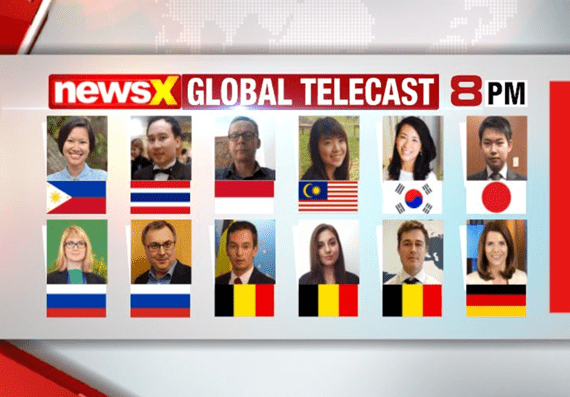 EU-India Relations in the Spotlight

As part of a special Republic Day report for Indian news channel NewsX, EIAS experts Mr Alberto Turkstra, Ms Angela Sarafian and Mr Edward Danks, along with other commentators from across the world, shared their perspectives on President Modi’s recent vision of a ‘New India’, unveiled in Davos last week, and the present and future of EU-India relations in the context of a rapidly changing world order.

EIAS Programme Coordinator Alberto Turkstra was initially questioned on the perspective of modern India from within the EU. In response he commented that despite India being one of the EU’s main strategic partners, interaction between the two has been quite underwhelming. In spite of the return of the EU-India summit during the past two years after a four-year hiatus, and the endorsement of the EU-India Agenda for Action 2020 as a common roadmap aimed at reviving the strategic partnership has been endorsed, negotiations over a proposed free trade agreement have been slow due to disagreements over intellectual property, agriculture, the pharmaceutical industry, the retail sector, as well as the Brexit process adding to the difficulties. This slow progress arguably demonstrates how India and the EU are not currently one another’s foreign policy priorities. On this subject however, Mr Turkstra went on to argue that considering India’s global position as the worlds fastest growing large economy, and with a population set to overtake China’s in the coming years, the EU’s apparent lack of interest in India is staggering.

However, according to Mr Turkstra, there is enormous scope for cooperation. He highlighted the many complementarities and synergies existent between Europe and India, as well as the mutual imperative for greater understanding on security issues including Syria, Afghanistan and maritime security. Adding to this, improved collaboration on water and clean energy is likely to become key to this relationship, with a recent MoU on Water Partnership signed between the EU and India, set to utilise European technical expertise and know-how to help clean Indian rivers in the framework of the Swachh Bharat and Clean Gangas campaigns.

As a final comment, India’s preference towards dealing with EU member states bilaterally was commented upon. France, for instance, is a major partner in defence, space and nuclear energy. Germany, on the other hand, is New Delhi’s top EU trade partner. The United Kingdom ─ home to a major Indian diaspora ─ has a historical relationship with India and India invests more in Britain than it does in all other EU countries put together. It will be interesting to see how EU-India relations will evolve in the context of Brexit.

Following on from Mr Turkstra, EIAS Communications Manager Angela Sarafian commented on the specific sectors that could help boost trade relations. Having outlined how industries including jewellery, textiles and chemicals currently dominate trade, the high hopes for forging new business partnerships in ICT, R&D, health device technology collaboration and the pharmaceutical industry were then highlighted. Continuing from here, it was mentioned how an interest has emerged from within India for the expansion of the Smart City programme. This was flagged as a very fruitful venue for India-EU exchange of best practices in boosting e-governance, public provisions, environmental sustainability (e.g. water management) and the fostering of entrepreneurial operational efficiency.

Moving on to address the issue of China’s international role and significance, Ms Sarafian was then queried about the influence of China throughout Central, Eastern, and South Eastern Europe in light of the 16 + 1 Summit. The 16 + 1 summit is a component of Xi Jinping’s ‘Belt and Road Initiative’, with Ms Sarafian suggesting it has put before the diverse group of countries a framework of bilateral and multilateral initiatives on trade, investment and transportation networks that have been welcomed after years of recuperation from the 2008 financial crisis. A more developed infrastructure and more robust financial markets throughout Europe, could provide countries like India with more opportunities for partnerships in diverse sectors.

On the question of which Asian nations possess the capacity to lead the cause of international development in a changing world order, EIAS Researcher Edward Danks argued that with the world looking more than ever to non-traditional development partners, often throughout Asia, to fill the void left by a retreating world order, this issue is certainly a hot topic. Mr Danks cited how China is frequently discussed with regard to changing global development, mentioning again the role of the Belt and Road Initiative. Adding to this however, he went on to argue that the overwhelming focus on China can lead to other potential developmental partners within Asia being overlooked. The recent economic agreement between the Indian and Japanese governments to establish an ‘Asia-Africa Growth Corridor’ demonstrates a willingness from Asia’s second and third biggest economies to contribute to development, attempting to create a free and open Indo-Pacific region.