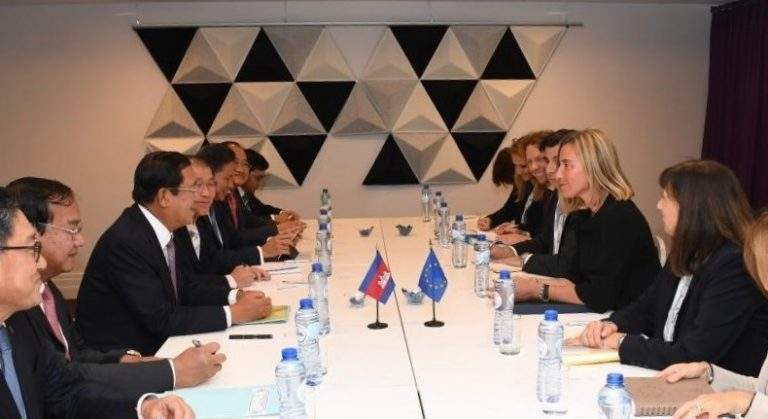 On 12 August 2020, for the first time in the history of the ‘Everything But Arms’ (EBA) mechanism, the decision to partially withdraw trade preferences to one of its key beneficiaries, Cambodia, came into effect. Simply put, the EBA represents the European Commission’s trade scheme which grants duty-free and quota-free access for all products except arms and ammunition to the 47 ‘Least Developed Countries’ identified by the United Nations. The move, which was made over concerns related to serious human and labour rights violations, means that around 20 per cent of Cambodian exports (worth approximately EUR 1 billion in goods) are now subjected to the EU’s customs duties.

The importance of EBA

Since the EBA status was granted to the Southeast Asian Kingdom in 2001, the arrangement has been instrumental in fuelling its incipient export-driven economy. After being trapped for nearly three decades (1970-2000) in broader Cold War geopolitical tug-of-wars during which the country endured successive phases of severe instability and isolation; Cambodia started witnessing foreign investments flocking in, especially in the garment, footwear, and bicycle industries. As a result, some great economic progress has been achieved in the last 20 years. Phnom Penh  has sustained an average 7 per cent economic growth per year, while 800,000 jobs have been created for (mostly female) factory workers. In this context, the EU represented Cambodia’s largest trading partner by accounting for 45 per cent of its total exports in 2018.

Upon granting the trade preferences, Brussels had, however, laid out one condition: the right to temporarily withdraw (fully or partially) the EBA status to its beneficiary country in case of ‘serious and systematic’ violation of UN and ILO conventions – which was deemed to be the case in Cambodia.

While the respect for human rights issues under Prime Minister Hun Sen’s 35-year authoritarian rule has often been a challenge, 2017 marked a major turning point. A year ahead of the 2018 National Elections, the ruling Cambodia People’s Party (CPP) started to increasingly harass political opponents and the independent media to prevent the popular opposition party, the Cambodia National Rescue Party (CNRP), from gaining victory. Following the government crackdowns, the European Commission launched an 18-month investigation in February 2019 during which EU officials met with relevant stakeholders from all sides. The main areas for improvement revolved around 3 themes. First, political rights were stressed, notably the reinstatement of the dissolved opposition party and the release of its main opposition leader Kem Sokha. Second, labour rights were emphasised, such as allowing workers the right to demonstrate and to create a trade union. Third, land grabbing issues were pointed out, particularly to ensure a fair resolution of land conflicts as well as to introduce an effective system of land titling.

Unsurprisingly, the calls for greater democracy have received a chilly reception from the Cambodian leadership. The authorities have mainly equated the demands as issues of ‘foreign interference’ by framing them as direct threats onto the country’s sovereignty and hard-earned political stability.  The Foreign Affairs Ministry has also interpreted the initiative as a case of ‘extreme injustice’. Indeed, Phnom Penh felt perplexed as to why it was being reprimanded by Brussels while other EBA beneficiaries with poor human rights records, such as Myanmar and Bangladesh, did not seem to be alerted. In the meantime, Vietnam, Cambodia’s traditional rival, even concluded a FTA with the EU. Lastly, Cambodia’s recent and complex historical legacy has led PM Hun Sen to perceive the move as broadly hypocritical. The infamous support from Western countries, notably from the US and the UK, to the Khmer Rouge regime during the last decade of the Cold War has made the old leadership suspicious of any ‘democratic’ exhortations from the West. Consequently, although the EU repeatedly expressed its concerns and kept negotiations with the local authorities as open as possible to avoid any actual withdrawal, no substantial improvements were made throughout the process. Instead, the ruling CPP built a nationalistic narrative calling on the ‘resilience’ of the Cambodian people to overcome this additional hurdle.

Impacts of the partial withdrawal and future opportunities

The most immediate impacts of the partial withdrawal are twofold: economic and geopolitical. Cambodia’s economy will incontestably be negatively affected by the decision. By imposing new tariffs on low-value goods, the domestic market will become intrinsically less competitive, thereby inducing a number of job losses. Unfortunately, it comes at a time when the sector has already been hit by the COVID-19 pandemic. Geopolitically speaking, the initiative is believed to push the pro-China Cambodian leadership further into Beijing’s orbit. Admittedly, the Middle Kingdom’s accommodating attitude, coupled with the fact that it has been pouring billions of dollars in infrastructure projects as part of the Belt and Road Initiative, had already provided a fertile ground upon which PM Hun Sen’s friendly stance could flourish.

However, amid this strained context, some opportunities await. Notably, several of the EU’s internal strengths, coupled with the current geopolitical context, offer potential avenues for building brighter EU-Cambodia relations. First of all, besides being a trade partner, Brussels also represents a strong development actor in the country. Between 2014 and 2020, the latter invested EUR 500 million in areas of importance for Cambodians, namely in agriculture, natural resource management, education, and good governance. Most recently, the EU strengthened its role in the fisheries sector, a critical industry in Cambodia where it accounts for as much as 9 per cent of GDP while 76 per cent of households rely on fish for their main protein intake. Furthermore, Brussels can capitalize on the robust trust and soft power it enjoys among Cambodians citizens. According to a 2020 survey report conducted by the Singapore-based ISEAS-Yusof Ishak Institute, the country looks to Europe as its ‘most preferred and trusted strategic partner’ and ‘most preferred destination for tourism, education and language’, both ahead of Japan, China and the US. In parallel, Beijing’s growing political and economic influence in the Kingdom has triggered a strong anti-Chinese sentiment among the population. A prime example of this is Sihanoukville, a once-sleepy town turned into a gambling enclave to rival Macau, where the influx of Chinese workers and the rise in drug trafficking and crimes have epitomised the resentment felt by the locals. Last but not least, Cambodia’s confidence in the United States remains low. According to the survey report cited above, Washington is seen as unreliable, which stems from the perception of its disregard of the region and the declining engagement observed under the Trump administration.

In conclusion, during these troubled times, it is important for Brussels to both maintain and reinforce its engagement with Phnom Penh, whether it be via its own development projects or via its partnerships with like-minded countries such as Japan.  Stepping up this engagement is crucial for 3 reasons. First, it would improve the EU’s image in the post-EBA era. By building upon its active role in development and by leveraging its soft power, Brussels can pave the way for stronger bilateral relations. Second, it would offer an alternative to Cambodia’s heavily reliant relationship with China. Doing so would not only provide some regional balance of power but would also answer the calls of the population increasingly rejecting Beijing’s presence. Lastly, greater EU involvement would likely fill the void left by the US, which currently lacks both popularity and leadership in the region.

At a time when the European Commission has vowed to become more ‘geopolitical’, Cambodia serves as a stark reminder that Brussels needs to advance its own interests in a region that has typically been understood within a broader context but nonetheless holds geopolitical importance in its own right. More than ever, it also begs the question: Will the EU gradually move beyond its traditional normative power toward a more strategic one? Balancing the two will arguably be its greatest foreign policy challenge for the years to come.

Photo credit: Press and Quick Reaction Unit of The Council of Ministers (Cambodia).