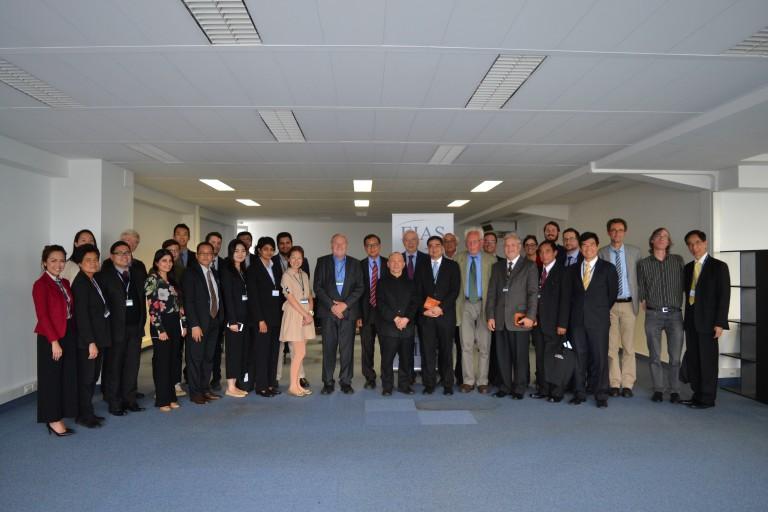 On 31 May 2016, EIAS welcomed a delegation from the Council of Asian Liberals and Democrats (CALD). Topics that were covered included the European integration experience and lessons that can be applied to Asia, barriers to integration created by differences in cultural values, and the implications of an increasingly assertive China for democratisation in Asia.

CALD is an organization of Asian liberal and democratic political parties and functions as a forum for the discussion of liberal and democratic ideas in Asia. It consists of nine member parties such as the Indonesian Democratic Party of Struggle and the Taiwanese Democratic Progressive Party as well as individual members such as Martin Lee and Sin Chung Kai from Hong Kong’s Democratic Party. CALD has held major conferences concerning topics such as the Asian economic crisis, globalization, ethnic and religious minorities , and migration, amongst others. CALD engages regularly with non-member political parties from countries such as Japan and South Korea in addition to non-Asian organizations such as the Alliance of Liberals and Democrats for Europe.

Former Prime Minister of Thailand Abhisit Vejjajiva stated that the delegation hoped to hear European perspectives and gain insights on the topic of regional integration and the cause of liberalism in Asia. The CALD delegation wished to learn how the challenges of integration which the EU faces, such as the debt crisis, terrorism and migration, affect the cause of liberalism. These issues, complexly interrelated, have put a strain on the support of the people for liberal values. For instance, heavily indebted economies tend to be either a cause or a result of populist movements from the extreme left or right, and these movements can squeeze out liberal democratic parties. Additionally, the issue of migration brings to the fore the question of how to deal with human rights; i.e. how to make policies acceptable to a local population whilst also upholding democratic principles and humanitarian considerations.

Mr Abhisit remarked that although Asia has undergone dramatic economic growth, the degree of integration within Asia remains far behind what the EU has achieved in the past half century. Asian countries still face difficulties with integration, even within Southeast Asia. Although ASEAN has been able to fulfil its raison d’être of preventing the outbreak of intraregional war, it has yet to truly form a community that is united under and driven by a supranational political process.

An element of the stark contrast between the ASEAN and EU communities is the myriad of different political systems among ASEAN member states. While some member states have made relatively successful steps toward a democratic multi-party system, others remain on the opposite end of the spectrum under authoritarian rule. Others still sit in a gray zone somewhere in between. At the same time, while Asian liberal democratic parties may agree to the same fundamental political principles as their European counterparts, cultural differences still exist. For example, the “ASEAN Way,” which involves decision-making via consensus and internal consultations, differs from the practices of the West. This may result in misunderstanding and tensions between the two regions. Mr Abhisit mentioned the recent coup d’état in his own country as an example of an incident whereby a political development in the region can put a question mark on separate matters such as free-trade agreements between ASEAN and Western countries.

Prof. Em.  Sylvain Plasschaert acknowledged that the political realities in Asian countries do differ greatly from European countries, and indeed among themselves. He added that political and economic matters actually tend to be more interrelated than otherwise acknowledged. Economic integration requires an overall liberal outlook and is thus difficult to achieve among closed political systems. However, even the multi-party systems in Europe do not lean exclusively toward liberal tendencies; liberals have to contend with socialist parties as well. The multi-party systems are not completely faultless, as working with 28 member states presents its own challenges, especially with highly divisive issues such as the refugee crisis. While the EU has made significant accomplishments with regards to integration, it still remains an ongoing process with opportunities for improvement.

Another issue with integration in the EU is that it usually operates in a top-down approach. This approach can allow certain issues to go unaddressed, leading to the rise of radical parties. These parties expound populist policies to attract voters who are disillusioned with the status quo. Currently, issues such as migration and unemployment are daily concerns that voters feel are not being addressed by incumbent parties. Prof. Olivier Arifon added that an inability to come up with a form of discourse that can communicate effectively with voters has resulted in EU citizens resorting to “name and blame” games as a result of their frustration. The US is currently experiencing similar problems with its multi-party system.

Despite its top-down approach towards integration, the ability for EU member states to work together is crucial, for example in dealing with the current refugee crisis. Integration in the EU is meant to promote values such as rule of law, good governance, democracy and human rights not only within Europe, but for the world. Mr Sam Rainsy, President of the Cambodian National Rescue Party, remarked that liberalisation is indeed key to integration, and that is precisely the trouble that ASEAN faces. Without a set of common fundamental values, the roadmap for ASEAN’s integration will be more challenging than what the EU has experienced so far.

Another central topic discussed was the increasing influence of China. As it establishes trade relations and deepens economic ties with its neighbours, it also exerts a political influence antithetical to that of the West. While Western countries may for example withhold trade deals or security agreements with non-democratic governments, China does not place such conditions on cooperation. Additionally, while China repeatedly expresses a commitment to state sovereignty and mutual non-interference in internal affairs, it also demonstrates an aversion to multilateral fora, preferring bilateral relations in which its economic might provides an advantage. China’s recent assertiveness in maritime territorial disputes has also raised concerns regarding its view of other states as equals. For example, Chinese Foreign Minister Yang Jiechi remarked at a 2010 ASEAN Ministers Conference that “China is a big country and other countries are small countries, and that is just a fact.”

Mr. Martin Lee, Founding Chairperson of the Democratic Party of Hong Kong, expressed his concerns that many countries kowtow too quickly to China’s economic might. If the international community does not pressure China, it will not respect the values and norms expounded by the West and other liberal parties. This may create obstacles towards liberalisation among other Asian countries and, as a result, further complicate integration.

While some ASEAN member states seem poised to follow the direction of China, it is not the only regional power that Asian countries can take alignment from. India has elements of democracy and has experienced significant growth following the liberalisation of its economy in 1991. If it continues on a path of rapid development, it may serve as an additional model of a successfully democratised Asian state.

Ultimately, the priority of many Asian states are in addressing developmental concerns and raising millions out of poverty. China, a country that has made tremendous progress in this endeavour, believes that liberal ideology is not a prerequisite for development, and seeks to find an alternative model that works. However, even within China itself, CCP officials have stated in private conversation that they do recognize tensions within their political system, and that it does indeed require certain reforms to remain effective.

Democratisation need not be seen as something requiring the West’s patronage or China’s approval. Myanmar serves as an example of a country that democratised not due to external sanctions, nor pressure from Western or neighbouring countries, but simply because of a realization that the old system was unsustainable. These reforms were initiated from the inside, and can provide hope for other Asian countries, and for the cause of Asian regional integration.