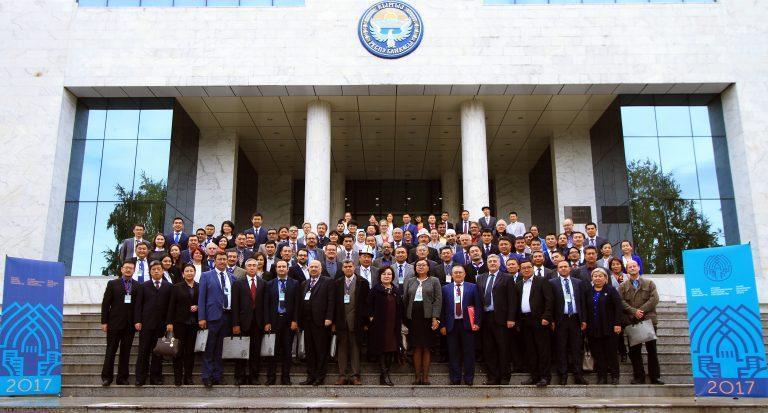 EIAS Senior Associate Mr Frederic Carlier participated on September 28 and 29 in the International Conference “Islam in Modern Secular States” held in Bishkek, Kyrgyzstan, and organised by the State Commission on Religious Affairs of the Kyrgyz Republic. The goal of the conference was to discuss the preservation of  the cultural identity of nation-states, preventing the infiltration of radical ideas through religious values and increasing the effectiveness of democratic governance in the religious sphere.

Today, a growing interest in religion have been observed at the global and national level.  Many countries of the world, including the Kyrgyz Republic, make efforts to develop and implement effective measures, create a model for a harmonious existence of religions and its conflict-free development in the conditions of modern secular state. The current wave of radicalism and extremism, which use religious slogans, can be overcome by strengthening the legitimacy, secular nature and legal system of the state, preserving its local culture, language and identity, including civil identity.

The representatives of the public institutions responsible for religious affairs and senior experts on religion from more than 20 countries convened in Bishkek to discuss the issues of state-religion affairs and the experience of secular states with numerous Muslim communities.

Mr Frederic Carlier’s presentation explored the millennium-long tradition of intertwining politics and religion from prehistoric times and the genesis of statehood to the modern concept of secularisation.  The paper next referred to the positive example of Indonesia in terms of embracing its inborn diversity and actively engaging with re- inventing an identity that can serve as a balancing mechanism for different ethnicities, religions, cultures and languages. Finally, Mr Carlier elaborated on a number of recommendations and legislative, educational, media and civil society measures that Kyrgyzstan can take in order to ensure a healthy balance between politics and religion.