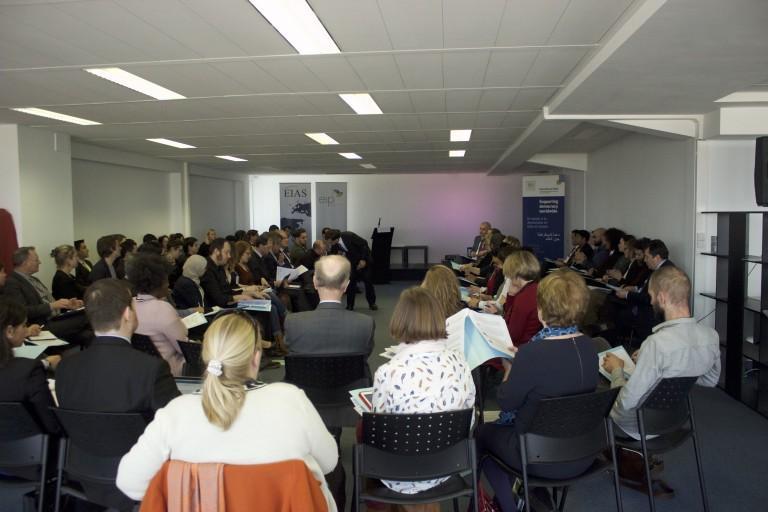 On 23 March 2017, the European Institute for Asian Studies had the pleasure of hosting a roundtable on the topic of “Towards constructive citizenship through integration, civic education and inter-generational dialogue”, organised by the Office of International IDEA to the European Union (EUO), with the support of the Canadian Mission to the European Union and in collaboration with the European Institute for Peace (EIP) and WeCitizens. The programme included speakers from various backgrounds with expertise in the field of the promotion of civic education, integration and the prevention of radicalization. More than 60 participants discussed and assessed the scope of instruments available to places of learning and training providers in the aforementioned fields, and made policy proposals for an improved policy framework.

Active citizenship in the context of a multicultural society

Societies and democratic frameworks have changed during the last decades, and some recent developments resulted in an awareness of the need for civic education. Citizenship does not only refer to the acquisition of specific knowledge, but also implies more fundamentally the acquisition of social skills, values, attitudes, and critical understanding. Societal challenges such as mass immigration, multiculturalism, unemployment, shifts in shared values, multi-layered identities, loss of traditional reference structures, and the influence of radical ideologies have complicated the transmission of these capacities.

Developing a European framework in support of the Member States

As regards the European Union (EU), some meaningful policy initiatives have been taken within the context of limited EU competence in educational matters. Despite the attention given to  civic education within its borders by the EU, a framework for structural support to member states is lacking. Also, the EU will have to reach out to the youth with more adequate messages – currently, the vision of Europe is not shared by the youth, and they do not  feel concerned by the EU project. Less quantity but more quality is one of the solution to overcome apathy from the youth.

The regulatory framework for civic education in schools is different in the Flemish, French and German speaking communities in Belgium, including to which extent it is a compulsory part of the curriculum. In practice, challenges with regard to civic education vary considerably, but representatives concerned with this issue claim that schools lack the instruments to cope effectively. A strong structure would imply the definition of targets, content, required expertise, training for teachers, allocation of funds, and the continuous sharing of information on tools available to schools.

Fragile youth and the Molenbeek situation

For young people in fragile contexts, critical attitudes towards state and politics risk sliding into distrust and rejection of authority at multiple levels and institutions. According to a broad social survey conducted by the European Institute of Peace (EIP) in Molenbeek, unemployment, incivilities, and ineffective education are at the core concerns of young people, rather than security and radicalization. Yet, some of Molenbeek’s young people feel attracted by radical discourse due to frustration and geopolitical disappointment. For  young people to embrace constructive citizenship, it is necessary to find more and credible coaches and role models, and to ensure that young people can rely on a new social structure. Talent development is another useful angle to embark upon citizenship activation, and to commence at the earliest possible age.

Representatives of the City of Vilvoorde and of the Flemish Community provided an insight into instruments and challenges of both policy levels (municipality and regional). At the local level, authorities work with the broad definition of active citizenship, including active participation in the local social and political life. Priorities for constructive citizenship are participation, improved civic education in schools, partnerships, funding, attractive messages and content, cultural identity, and trust in democratic structures.

The feeling of belonging to a group (identity) is key to stability and integration of young people. At the same time, they must learn to respect other groups. Common values and tolerance can be transmitted in schools, e.g. via philosophy courses and inter-generational dialogue.

By guaranteeing human and political rights, equality of citizens and the separation of powers, democracy provides a framework for a stable society and sustainable development for all. Awareness of civic rights and duties consolidates people’s trust in democracy. Citizenship includes the acquisition of ethical standards and practical means for active participation in democracy.

A number of policy proposals were made related to areas of participation in society, framework for civic education in schools, modalities for partnerships with civil society, funding instruments, attractive messages for youth, and the content of civic education.