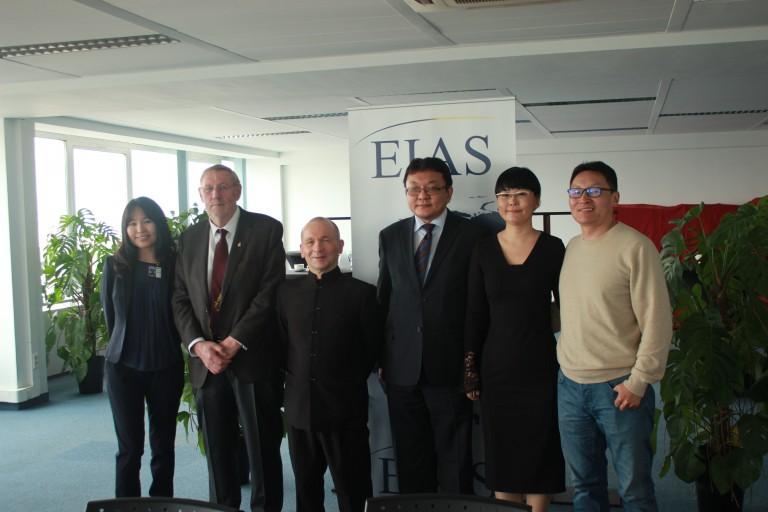 On March 13 2017 EIAS, in cooperation with the Embassy of Mongolia, had the pleasure to host a roundtable talk on Mongolian poetry with Mongolian author Luvsandorj Ulziitugs.

Ms. Luvsandorj is the author of the novel Nudnii shilend uldsen zurguud [‘The Pictures, What Remained in the Glasses’] (2004) and four books of poetry. In 2002, her poetry collection Erh cholootei baihyn urlag buyu Shine nom [‘Art of Freedom or The New Book’] was nominated for the National Literary Award Altan Od [Golden Feather]. For the past eight years, she has worked as a freelance journalist. She is currently touring Europe to present her new book “Aquarium: Nouvelles de la Mongolie d’aujourd hui.”

The roundtable was opened by a welcoming speech by EIAS CEO Alex Goethals and followed by H.E. Ambassador of Mongolia O. Och’s warm words on Mongolian literature and the importance of the meeting as a way to deepen the mutual understanding between Europe and the Northeast Asian country.

Asked about the role of women in Mongolia, Ms. Luvsandorj answered that women cover an important position in its society. In particular, she remarked the key role of mothers in contemporary Mongolia: many songs and poems are built around the mother figure. She proudly observed that, compared to other societies in the region, Mongolian women enjoy greater freedom, an essential element for a rich literature production.

At the end of her speech, Ms. Luvsandorj also spent some words stressing the importance of a better comprehension of Mongolian culture and lifestyle abroad. Sometimes foreigners do not appreciate the essence of the country and therewith lose a good opportunity to learn different habits and traditions, missing out to understand the deeper meaning of Mongolian arts.

The meeting was concluded by a commemorative photo and a round of informal discussions among the participants.