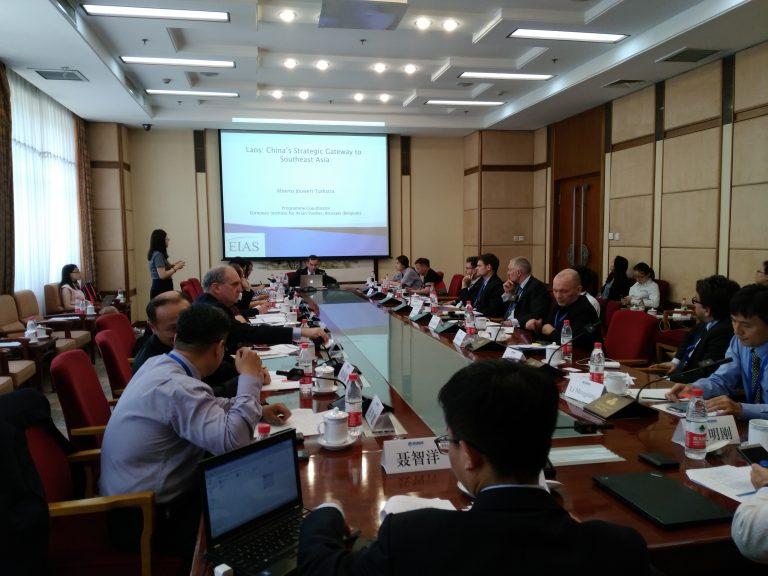 The European Institute for Asian Studies, represented by Mr Axel Goethals, CEO; and Mr Alberto Turkstra, Programme Coordinator, participated in a workshop organised by Liaowang Institute on May 31 in Beijing, which explored new opportunities and challenges of China’s ambitious One Belt One Road Initiative. The various sessions explored OBOR in the context of Great Power Politics, International Cooperation and the role of ASEAN.

Mr Goethals’ presentation highlighted that OBOR goes beyond connectivity between economies – people-to-people bonds are also pivotal.  The importance of education and culture, Mr Goethals argued, cannot be over-stressed – they are the basis and root for connectivity and communication, for innovation and creativity, a precondition for better trade and economic collaboration, and a means to understand the other better.

More specifically, Mr Goethals explained that services are an integral component of people-to-people bonds. With the exception of the financial sector, many services with great potential are underexplored in the OBOR Initiative.  Services are a major contributor to jobs and growth, and can strengthen ties and understanding between peoples along the OBOR.  In the developing and increasingly sophisticated economies of today, creativity and innovation are fundamental to adding value and ensuring competitiveness.

There is a huge need to create and develop further understanding, perception, and exchanges between China and the EU.  To this end, bridges should be built between China and Europe in the fields of education, culture, creative industries (CCIs), innovation, and youth entrepreneurship.  Both China and Europe have identified the CCIs as a new and innovative source of economic growth and employment.  The cultural field is estimated to contribute 3% to the GDP of the EU, and 3.48% of China’s GDP.  These industries are characterized by their high rates of young entrepreneurs and employees.  The sector is a bulwark of creativity and innovation, not only in the cultural sphere – such as performing arts and music – but also in areas such as architecture, product design, e-commerce, gaming, and the film industry.

Brussels and Beijing are emphasizing the importance of education, innovation and youth entrepreneurship in order to tackle socio-economic challenges.  Creative and inspirational young graduates find it hard to operationalize and valorize their ideas.  Universities and their spinoffs will have a crucial role to play in this regard.

Mr Alberto Turkstra’s presentation focused on the role of the Greater Mekong Sub-region in the Belt and Road Initiative (BRI) and Laos in particular as a key strategic partner for the realisation of the China-Indochina Peninsula Corridor, one of the six land-based trade corridors. The construction of the railway traversing Laos from North to South which started in late 2016 is an important pillar of the Singapore to Kunming railway link, first discussed in the 1990s but never realised due to the absence of sufficient funding, and fits well with Laos’ vision of transforming from landlocked to land-linked as a transportation and logistics hub primarily through the development and upgrading of its transport infrastructure in order to overcome the structural constraints of being both a landlocked and least developed country. The diversification of its economy away from natural resources will prove crucial to graduate from the list of least developed countries by 2020; to this end China is also investing heavily in the development of Special and Specific Economic Zones to drive the growth in the industrial and services sector in Laos.

This railway project, Mr Turkstra highlighted, should also be understood more broadly in the context of China’s high-speed railway diplomacy illustrated by the construction of China’s first high-speed rail built outside the country in 2015, linking the Turkish cities of Istanbul and Ankara; as well as China’s need to export technological standards as part of its ambition to become an innovation-driven economy and a leader in high-tech Research & Development.

The seminar counted with the participation of multiple local experts as well as representatives from Nanyang Technological University, the European Center for International Political Economy, Indiana University, Cambridge University and the Norwegian Institute for Defense Studies.