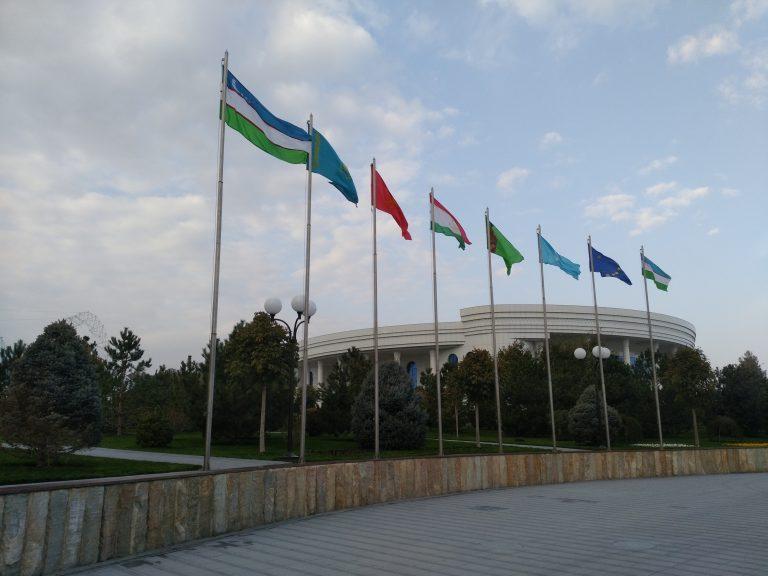 A delegation from the European Institute for Asian Studies, comprised of Mr Axel Goethals, CEO; Mr Frederic Carlier, Senior Associate and Mr Alberto Turkstra, Programme Coordinator, visited Uzbekistan from 8 to 13 November to attend the high-level conference “Central Asia: One Past and a Common Future, Cooperation for Sustainable Development and Mutual Prosperity” held in the historic city of Samarkand. In Tashkent, EIAS representatives also held meetings with several Tashkent-based think tanks (the Institute for Strategic and Regional Studies under the President of the Republic of Uzbekistan, the Center for International Relations Studies and the Development Strategy Center) to discuss the progress and implementation of reforms under Mirziyoyev and prospects for regional integration prospects in Central Asia, the role of the EU in the region, among other matters of mutual interest.

The Samarkand conference took place at a time when Uzbekistan finds itself at a critical juncture in time. Having turned 25 years of independence last year, Uzbekistan under its new President Shavkat Mirziyoyev has put in place an ambitious development, modernisation and economic diversification agenda in place, and the implementation of a more proactive embrace of multilateral cooperation. The conference was attended by more than 500 international and local participants. All Central Asian foreign ministers were present, as well High Representative Federica Mogherini, representatives from US, Afghanistan, Iran, India, Pakistan and China, and international and regional organisations such as UN, OSCE, SCO and CIS.

During his keynote address, President Mirziyoyev described Central Asia as a region of unique opportunities and huge unrealised potential. He said trade volumes had increased between Uzbekistan and other countries of the region, and a highlighted a number of other positive developments, such as the resolution of border disputes and simplification of visa restrictions.

The conference’s two plenary sessions touched upon the development of regional cooperation and the assistance of the international community to the central Asian countries in counteracting modern security challenges and ensuring sustainable development. The breakout sessions were devoted to regional stability and security issues and on the cooperation of water use and ecology. Participants emphasized that the security of Central Asia is inseparable from global security. It was pointed that to deal with emerging challenges, central Asian countries require closer and more coordinated cooperation, now that the region is once again acquiring a central role with a growing geopolitical significance and Central Asian republics have the potential of becoming hubs for trade, transportation and logistics along emerging connectivity networks. Specific areas of enhancing regional cooperation in political, trade-economic, investment, transport-communication, water-energy, environmental and cultural-humanitarian spheres. The conference also outlined measures to counter the threats of terrorism and extremism, measures aimed at tackling illicit drug trafficking, illegal arms trade, organized crime, human trafficking, etc.

Cooperation will be particularly crucial in the area of water sharing between upstream and downstream countries states, especially in the context of the International Decade for Action “Water for Sustainable Development” which commences next year. Mr Frederic Carlier, EIAS Senior Associate, delivered a speech in the breakout session devoted to water and energy and spoke of the  high potential for the deployment of renewable energies and the possible financing mechanisms to develop green energies (the link to his speech can be found below).

The main takeaway from the Samarkand conference are the optimistic prospects for closer regional integration and cooperation. President Mirziyoyev put forward the idea, welcomed by the other Central Asian foreign ministers, of the need that a functional intra-regional structure or platform for the heads of state of central Asian countries to meet regularly to ensure a more coordinated approach to regional challenges.