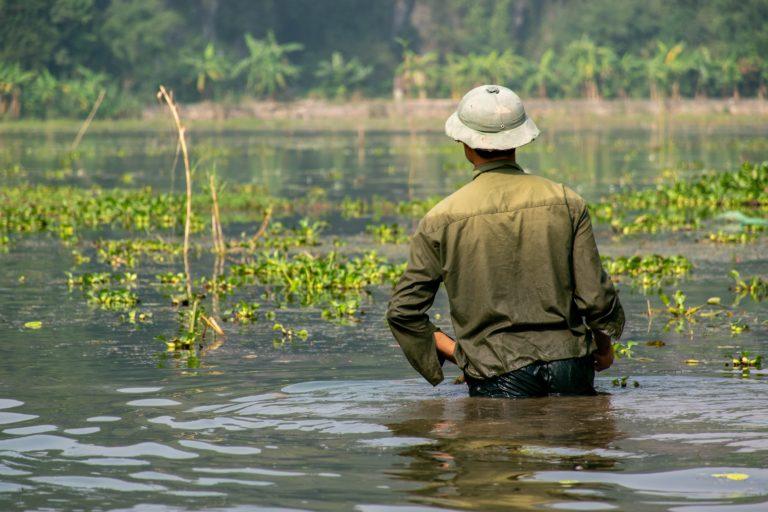 Contemplating the Climate Struggle at COP27 – Examples from Southeast Asia

From 6-18 November 2022 the ancient city of Egypt, Sharm el-Sheikh, was host to the Conference Of the Parties (COP27) of the United Nations Climate Change Conference (UNFCCC). The four principal goals of this year’s COP included 1) Mitigation - essentially implementing the Glasgow Pact; 2) Adaptation - how to adapt the strategies to stay at the forefront of climate action; 3) Finance - how and by whom should disaster-hit states be compensated; and 4) Collaboration between civil society and governments.

The COP offers a once-a-year opportunity for developing states to make their voices heard and push developed economies to act on behalf of the looming global climate threat. In this regard, the European Union (EU) has been dedicated to global environmental action for years.

Yet, many developing states in Asia, such as Vietnam, have come to doubt the EU’s commitment to the climate, as some of them have been facing extreme weather phenomena like floods (e.g. Philippines, Vietnam, Pakistan) and excessive heat (e.g. India). As a contributor to the global carbon emissions responsible for today’s climate disasters, the EU is perceived to lag behind in contributing to providing financial aid for the damages less polluting countries have been suffering from in recent years. These countries’ determination to push for action and deeds added pressure to high-income countries to honour their previous commitments as signed in the Paris Agreement, while demanding compensation for “loss and damages” related to climate change. How will the relations between the EU and the developing states in Asia proceed in view of climate change? What can the EU do to step up its game and further engage with its Asian partners, who have now somewhat regained confidence in the EU as a climate change leader?

States worldwide, but especially those in Asia, are hit hard by climate change. For instance, in India the mercury pointed to an awe–striking 49°C in the summer of 2022, while Pakistan and the Philippines suffered from devastating floods. These extreme phenomena added to other long-existing financial struggles, with the bill of these catastrophes amounting to millions of euros of losses due to damages translating into profound disasters. Humanitarian aid was imperative, while more funds had to be deployed by national governments and international aid donors so as to rebuild the wrecked infrastructure.

In light of these crises, some Asian countries like Indonesia, Vietnam and Pakistan have stressed that the legally binding commitments of high-income countries have not seen sufficient progress. This threatens to derail the ambitious goal of “Carbon Net-Zero” by 2050, as signed in Paris in 2016. The Paris Agreement, among other things, implies that countries need to outline a yearly plan of action to tackle climate change. Yet only 23 countries out of 193 had submitted their plans by the time they convened at COP27 in Sharm-el-Sheikh. In the eyes of those most vulnerable to climate change, developed countries seem to lack the general political will and ambition to really prioritise climate action, as many of them are currently struggling with the pending energy crisis and rising inflation rates, putting aside the climate emergency. As a result, Asian and other development states feel as if they are pulling the “short end of the stick”, while high-income countries may have the luxury to push the deadlines forward.

The second major issue troubling Southeast Asian states in particular, is the lack of foreign investments in green energy infrastructures, which are not progressing fast and wide-scaled enough. In particular, ASEAN alone needs a total of at least 210 billion dollars worth of investments in the green energy sector to be able to meet the greatest bulk of its energy demands, an amount far too great to cover on its own, especially on top of reparations due to the “loss and damage” resulting from phenomena related to climate change. The EU-ASEAN summit, in particular —held on 14 December 2022— has shown the dedication of the two blocs in combating climate change. Notably, they have agreed to  promote “enhanced collaboration between ASEAN and the EU for a green and inclusive transition, underpinned by cooperation in the areas of environment, climate change and green technologies”. Now all they need is to put the money where their mouth is.

The “Loss and Damage” Enigma

The message South and Southeast Asia conveyed at COP27 was crystal clear, as for them the developed nations need to pay for loss and damage created by the effects of climate change. A decade ago the industrialised world pledged to provide 100 billion USD in international aid to mitigate the impact of climate change. However, to date not even half of that has been collected. The EU itself has supported the cause by roughly 23 billion EUR in 2021 and 2022, still falling short of the agreed amount. For this reason, French President Macron spoke up during the climate summit and urged other developed states to pay their fair share, also nodding to the United States and China, respectively the first and second global carbon dioxide emitters.

Notably, other non-EU actors, like the United Kingdom (UK), have pledged to keep their financial aid running, contributing to the “Loss and Damage Fund”. However, given the current state of the UK economy, questions arise about how they will manage to meet their international aid goal. The EU in particular has been contributing largely to funding developing economies through the international aid framework, yet never before through a specific, UN-led climate fund.

Just Energy Transition Partnerships (JETPs) have been another useful tool to assist in green growth, allowing the EU to cooperate with developing economies. They are  significant since they financially assist developing states to move away from a high-emission energy production model to a greener one. The EU’s JETPs so far have been signed with South Africa at COP26 (also signed by the US and the UK), one signed with Indonesia at the G20 in November 2022 (with the UK, the US, Japan and Canada as additional parties).  Now, there is one more with Vietnam (also with the UK, the US, Canada and Japan) in the context of the EU-ASEAN Summit in Brussels in December 2022.

The EU’s COP27 delegation arrived at the summit ready to put in the work and tackle climate change. After days of debate with its external partners, especially with the more vulnerable climate states demanding climate compensation for their losses to climate disasters, they reached a compromise in establishing the “Loss and Damage Fund”. In addition, EU officials called on other delegates to take on this opportunity to engage themselves so as to keep the 1.5°C goal within reach. At first, EU leaders and other developed nations seemed hesitant to accept the establishment of such a Loss and Damage fund, fearing open-ended, endless liability accusations, potentially leading to non-sustainable financial obligations. For climate-vulnerable nations it seemed, however, the only way to obtain climate justice.

Hence, the importance of the EU compromise should not go unnoticed, as it was a clear incentive to regain the trust of climate vulnerable states, as the developed countries have repeatedly failed to deliver on their past climate promises. In a time of global energy insecurity and uncertainty, it was difficult for the EU to push for further commitments on climate justice, while certainly bearing its fruits.

Additionally, the “Global Shield Initiative”, proposed by Germany puts forward a secondary, supplementary fund to the Loss and Damage one, accumulating a total amount of 200 million USD. An agreement between the G7 and the V20 (the 20 most climate vulnerable states around the globe) was reached so as to guarantee a stable flow of funding dedicated to alleviate the effects of climate disasters. At its core it is an insurance scheme, offering citizens in climate vulnerable nations the possibility to insure their properties, so as to limit their losses after another natural disaster.

The Global Shield is one of the many initiatives still underway and a complimentary action to the general Loss and Damage Fund. Yet, NGOs and activists accused the initiative of trying to provide as little as possible to deliver the legal obligations the developed nations have now accepted at COP27, thereby endangering the greater picture. Addressing those concerns, German Chancellor Olaf Scholz emphasised that the Global Shield Initiative is not there to threaten the much bigger Loss and Damage Fund but rather to serve as an additional contribution to the COP’s “climate finance” pillar. Another pressing issue concerns who in the V20 countries will be able to afford the insurance scheme. Since their purchasing power is low, the question remains as to how those countries can be adequately protected against rising sea-levels, posing a gradual threat rather than an immediate one like floods.

With initiatives like the “Global Shield” and encouraging further reaching future commitments, existing tensions had been sufficiently alleviated for the participating states to reach a consensus. However, COP27 may not have delivered on the hoped for immense successes, as it did not lead to far-reaching commitments and declarations like the (in)famous Paris Agreement, thereby also lacking to adequately achieve its mitigation goal.

Nevertheless, COP27 showed the willingness of the international community to meet at the highest level, debate climate action and compromise to ensure a sustainable future for all. The EU in particular stood by the most vulnerable states and promised better management of the already existing funds, called for other industrialised states to contribute generously to the Loss and Damage Fund and pushed for enhanced cooperation between like-minded states, so as not to rely on the uncertain cooperation of the international community as a whole.

Despite the historic win of climate vulnerable countries pushing for the establishment of the Loss and Damage Fund, many of them remained rather displeased. While thousands of activists, protesters and NGOs representatives were present at COP27 in an attempt to bridge the gap between policy makers and civil society, the latter remained dissatisfied as the decisions did not reach as far as they had hoped for. For starters, environmental NGOs and individual activists COP27 only succeeded partially, mainly due to the lack of harsh rhetoric on fossil fuel energy —said to have been a needed compromise— with lobbyists from the fossil fuel industry pushing against EU initiatives to phase out fossil fuels.

As a result, the final COP27 text neither contains a clause regarding advancing the emission peak to before 2025, nor on phasing down on coal. The text only addresses “low emission and renewable energy”, leaving room for enhanced gas extractions as a lower-emission pollutant compared to coal. While the European Union pushed for the “low emission” part to be excluded, lobbyists from primarily developing states in Africa, as well as gas companies present at the conference managed to keep it in the final text. For African states plagued by climate change and ill-performing economies, the need to gain quick access to capital and strengthen their philasthenic economies seems to come at the expense of slower, more sustainable development, at least for now.

Overall, COP27 managed to bring new solutions in regard to finance and collaboration, but not so much to mitigation and adaptation. Most parties, in light of the current energy crisis and rising prices, were hesitant to make more extensive efforts to adopt and implement new agreements in those areas. In addition,  in their recent Summit the EU and ASEAN agreed to work closer together to tackle the lack of green energy investments, accelerating the green transition in the region and not to push the deadlines forward. As the tide is high, the expectations for next year’s COP28 in the United Arab Emirates are eminent, as it will hopefully bring forth more ambitious policies, deals and commitments by all stakeholders involved, particularly in mitigating the effects of climate change and making climate-vulnerable states more resilient.