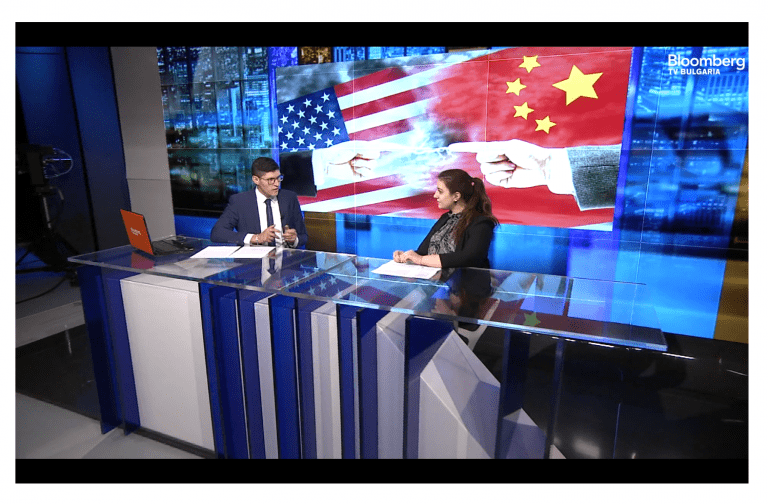 Commentary on the Implications of the Rising Sino-American Trade Tensions

With the United States introducing levies on more than 1,333 Chinese goods, China has on its part retaliated with additional tariffs on some 106 American products. Economic threats coming from the Trump administration have been met by the Chinese authorities with equal force – the compound size of the simmering trade dispute amounting to approximately USD 100 billion. On 26 April, EIAS Associate researcher Angela Sarafian shared her expert opinions on the rising trade tension between the U.S. and China for the Bloomberg Bulgaria TV programme “In Development”.

The commentary began with the evaluation that the trade conflict looks to be of uncertain escalation and duration, on the one hand considering the very diverse political and economic factors involved, and, on the other hand, exploring it in terms of larger trends of incremental processes. One thing is for sure, there will be a major enough impact on the two countries and the global economy as a whole. The tariffs on both sides are to hurt affected company revenues as well as companies without actual tariff sanctions with uncertainty damaging investor expectations.

The Trump administration has not really been as hard on China as the then presidential candidate’s electoral speeches initially vowed. One of the reasons is the geopolitical situation in East and South East Asia and the importance of China as a regional power to exert its influence on North Korea for instance. Still the United States president has in recent months, after a somewhat normalization on the Korean Peninsula, resorted in his rhetoric and narrative to the trade deficit with China, intellectual property issues, and exploration of ways to restrict Chinese investments in key U.S. industries. Not to mention that American businesses have long voiced their concern about the particulars of operating within the Chinese market, including requirements to partner with domestic companies and share technological know-how. Thus the tariffs can be largely attributed to the supposed “unfair trade practices related to the forced transfer of U.S. technology and intellectual property” as stated by the Office of the U.S. Trade Representative.

Despite the comparatively stable economic indicators in the United States, Ms Sarafian noted that the states that are to be most adversely affected by the Chinese-imposed tariffs in response to the Trump offense are none other than those which voted decidedly republican in the 2016 presidential election. The Chinese reciprocal tariffs target the agriculture and steel workers. Therefore, the most impacted states are the ones that export the most soybeans and import the most steel, aluminium, cars and airplanes.

As Ms Sarafian stipulated, it is essential to have comprehensive foresight when using trade devices to put economic pressures, not to mention the necessity for accurate and timely evaluation of the dynamics of displacement or co-existence of rising and ruling powers, in view of a President that is keen on zero-sum games. For instance, in putting forward tariffs for the import of solar panels from China, the U.S. risks tangible job loss in the solar energy industries, as five times more Americans are actually involved in solar installation and technical support than in manufacturing. This could lead to a slowdown in the solar adoption. It was also noted that the U.S. tariffs are not to take effect immediately but rather undergo public discussions and a hearing to be held on 15 May.

What the commentary highlighted as one of the most indicative moves was the ban on American companies (namely Qualcomm) to sell parts and services to ZTE for the duration of seven years. The imposed restrictions come as a consequence of a supposed ZTE practice of shipping equipment to embargoed countries like Iran and North Korea. ZTE is China’s second largest maker of telecom equipment and fourth biggest smartphone supplier in the U.S. This ban comes to underline a very significant rising protectionist trend.

Even if at their current level, the US tariffs on China do not have a particularly devastating economic effect, given the strategic choice to move away from export-dependent economic development, a USD 500 billion negative change to the trade balance is sure to put additional pressure on the Chinese economy, slowing down growth in a non-premediated manner. Should that be coupled with a multi trillion shadow banking sector (a plenitude of non- performing loans, an unregulated wealth management even in regards to the Belt and Road Initiative and the financing of risky infrastructure projects, patterns of risk amelioration via failure guarantees by the larger banks operating in Mainland China) there could arise legitimate concern for slow down or even reversal of the reform processes that have been progressively taking place.

Ms Sarafian went on to further reiterate that even in view of a 300 percent Chinese debt-to-GDP, which is at twice the height it was a decade ago, or the classic indicator of corporate-debt-to-GDP, the Chinese governmental policies have been showing great adeptness at addressing the issues of a possible financial sector debt bubble and taking the necessary measures (particularly so in regards to the accumulation of bad loans, bad for both the banks footing the bills and the beneficiaries of the low return investments). An already set into motion illustration of the above capabilities and willingness by the Chinese policymakers would be the controlled by the authorities’ slowdown of growth that no longer serves the longer-term sustainable direction of Chinese development.

Another concern that the West and its East Asian partners appear to harbour, is the Made in China 2025 agenda initiated by Premier Li Keqiang, which puts the focus on innovation- driven developments and smart technologies to push forward the country away from labour-intensive productions and towards the frontline of the global supply chains. The Trump administration largely views the modelled after the German 4.0 Industry, Chinese Artificial Intelligence drive as an attempt to acquire US technology and control cutting-edge industries. The sectors that are to be strategically developed within the Made in China 2025 framework focus on new generation information technology, robotics, space and ocean exploration equipment, power and energy technical advances, new materials testing, biomedicine and medical devices, etc. Ms Sarafian stressed that China has already taken great strides in aircraft manufacturing, semiconductor technologies, new nano materials, 5G mobile networks and new energy vehicles.