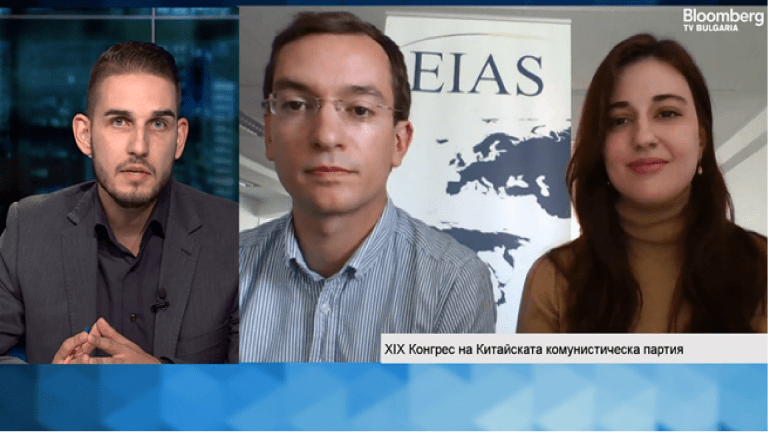 Considering the rhetoric of President Trump and the US foreign policies, the recent developments in Europe and Brexit’s impact, there is little other alternative than China to carry out the global cause of development. This is what the Programme Coordinator of the European Institute for Asian Studies, Mr Alberto Turkstra commented live from Brussels for Bloomberg Bulgaria. The programme “Under Development” with Mr Velko Kamenov also featured Ms Angela Sarafian, Communications manager and researcher at the European Institute for Asian Studies. The two commentators highlighted the most interesting moments of the 19th Communist Party Congress and its implications for China and the world.

The significance of the Congress for China and the world is in the peaceful transition of power from one generation of leaders to the next, providing crucial legitimacy for the CCP. The script for leadership succession would indicate putting forward a new heir apparent. Over-represented regions in China include Shanghai, Beijing, Tianjin, Chongqing, Fujian and are most likely being governed by the next in-line President.

In his 205-minute long opening speech in front of the congressional delegates (2300 delegates in total, including 200+ Central Committee, 20+ Politburo and 7 Standing Committee), President Xi Jinping outlined the work in the past 5 years rather than a detailed blueprint report, and offered a sweeping vision to transform the country by 2050. The general state directions for the coming term and even further ahead, accentuated on political reform, fight against graft, the necessity for international cooperation, economic integration, sustainable global development and achieving global peace, indicated Ms Sarafian.

According to Mr Turkstra, President Xi Jinping with his long-term vision, not only for the next 5 years, but rather the next 4 decades, heralds a “new era” of political leadership on par with Mao Zedong. President Xi Jinping’s report titled “Secure a Decisive Victory in Building a Moderately Prosperous Society in All Respects and Strive for the Great Success of Socialism with Chinese Characteristics for a New Era” introduces the thrust for domestic sustainable progress and a more ambitious and proactive foreign policy.

President Xi Jinping stressed the need for more material and cultural wealth to not come at the expense of environmental concerns. China renewables sector already boasts a progressive energy mix- currently generating more than 1/5 of its power through renewable sources. Some 60% of solar cells in use around the world have been produced by China.

Finally, the two commented on China’s bid for further economic changes rather than market reform by containing financial risks and encouraging growth of private businesses via innovation, increased consumer spending and breaking up of monopolies. For instance, China has already fostered around a third of the world’s tech unicorns. A very important point to be made is the government’s controlled deceleration of GDP growth and the push for moving Chinese industries up to the medium and high end of the global value chain.