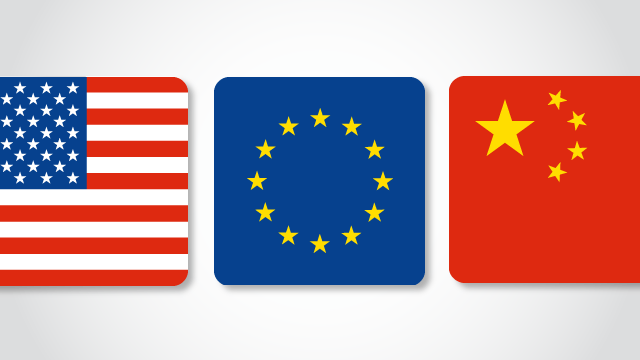 On 5 August 2019, the value of the Chinese yuan (renminbi) weakened past seven against the dollar, breaking through a sensitive threshold. This happened for the first time since the global financial crisis. The news raised widespread anxieties in the markets and among decision-makers. The recent escalation of United States (US)-China tensions is seriously affecting the European Union’s (EU) economy and the future of the multilateral global trading system.

The decision of the People’s Bank of China (PBOC) to let the renminbi slide past the seven-to-one exchange rate against the dollar came as a response to the US announcing to levy a 10 per cent tariff on 300 billion USD worth of Chinese imports. Crossing the key seven threshold drew ire from the Trump administration, which in return labelled China as a currency manipulator. The claim was contested shortly after by the International Monetary Fund (IMF).

In reaction to the US move, the PBOC released a statement on 6 August which included repeating word-by-word the official directive on setting the daily renminbi exchange rate. According to the directive, adjustments are made based on market trends, and the rate is managed against a currency basket.

As one of the currencies influencing movements of global exchange rates, any sudden or unexpected renminbi movement prompts immediate speculation regarding potential triggers in the background. But the recent drop was not completely unexpected. PBOC Governor Yi Gang already hinted towards the arbitrary nature of the seven threshold several months back in June 2019.

As of now, significant depreciation of the renminbi is unlikely, and forecasts predict only a moderate drop in the yuan’s value. As in reality, China does not have much room for manoeuvring with the renminbi. Offsetting all tariffs by managing the exchange rates is out of reach, and any depreciation could lead to significant capital outflows and inflation. Looking at the trends from recent years, the PBOC has actually been endeavouringto strengthen the renminbi to ensure domestic stability.

The EU is stuck between the US, its largest trading partner and long-term ally, and China, its second largest trading partner and ‘systemic rival.’ Brussels has its own trade conflict with the US but also shares the main American grievances about the lack of a level playing field when it comes to the Chinese market. Trade tensions and global uncertainty have already taken their toll on the EU’s economy, primarily in the form of subdued economic growth, and are projected to continue doing so.

It is too early yet to draw far-reaching conclusions, but the EU needs to prepare for a potentially weaker renminbi’s impact on its economy. In the long run, a weaker yuan makes it cheaper to sell Chinese exports abroad, hence making Chinese products more competitive globally. This also makes importing goods to China more expensive, potentially leading to slackening demand for European goods in the country.

As a consequence, this could cause further tensions in a politically and economically already fragmented EU. Member States that are the most exposed to global value chains would be hit particularly hard by these measures. In addition, Germany would be significantly affected due to the country’s heavy reliance on exports.

The depreciation of the yuan is also an indicator of continuing trade tensions, which will have serious impacts on the EU’s economy. According to the latest estimation by UNCTAD, the EU may be able to capture 70 billion USD of the diverted US-China trade overall, significantly more than other competing economies. It can of course address this opportunity to catch some of the diverted trade between the two countries. But ratcheted US-China relations will have tremendous negative implications for global trade, growth, and productivity.

To offset the impact of an escalating trade spat, the EU needs to stimulate its productivity to ensure long term economic growth by accelerating the implementation of structural reforms in EU Member States. It also needs to promote multilateralism, in order to help sustain an open global economy and stable international governance, even against the backdrop of decreasing US commitment to multilateralism.

In addition, the EU needs to rebalance its economic relations with China. We have already seen the initial steps towards a more balanced EU-China dynamic with the gradual implementation of foreign direct investment (FDI) screening processes. This should be further accelerated by a push for greater reciprocity in the ongoing EU-China Comprehensive Agreement on Investment (CAI) negotiations, which are to be concluded in 2020.

Based on recent policy shifts we can expect the new EU leadership to continue pushing for a stronger stance on China. European Commission president, Ursula von der Leyen, built much of her platform around upholding a rule-based order ‘the European way.’ This predominantly refers to strengthening the EU’s economy as well as creating a united European voice on certain issues that have so far divided the bloc, including economic relations with China.

The EU is facing serious challenges by being caught up in the fight for pre-eminence between the US and China. It needs to be prepared to have a clear objective and manoeuvre well. Otherwise it might come out on the losing end of a bilateral conflict it is not directly involved in.