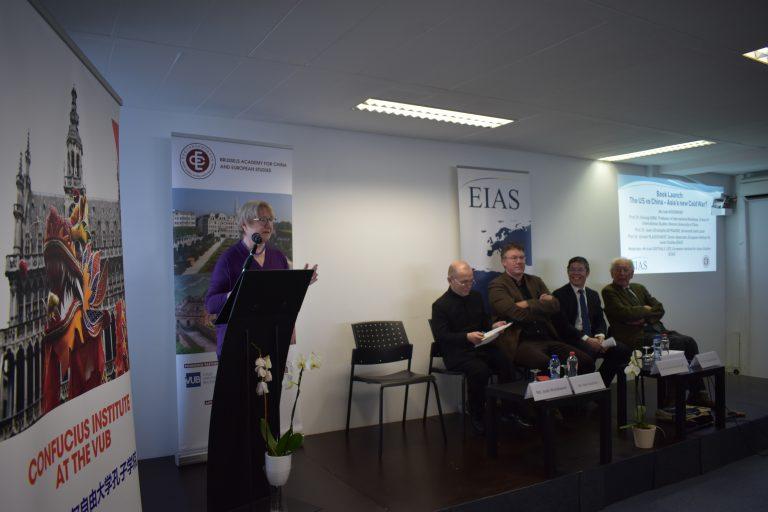 Book Launch: The US vs China – Asia’s New Cold War?

On 24 January, the European Institute for Asian Studies hosted the timely launch of the book entitled: “The US vs China – Asia’s New Cold War?”. In light of the recent developments in the relationship between two of today’s major powers, the book, authored by Ms Jude Woodward, assesses the possible future of Sino-American relations.

Ms Woodward reasserted that although the book was published in late 2017, recent developments in US-China relations – including escalations and confrontations made against China by the US – have only acted to strengthen the argument that a new polarisation has emerged in this bilateral relationship. The re-orientation of the US administration in response to the emerging role of China has been deemed alarming for the world, taking into consideration the various policies implemented by the former to restrain the growth of the latter. Consequently, this has prompted the US to strengthen its military position in order to counter Chinese defences, and to attempt to divert China’s focus away from its economic competitivity with the US.

In order to provide more in-depth assessment into the topic at hand, a panel of expert speakers were encouraged to comment on the main themes of the book. The first speaker, Professor Dr Jean-Christophe Defraigne of Université Saint Louis, demonstrated the fundamental differences between today’s situation and that existent throughout the latter half of the 20th century up until 1991. Among other things, China’s economic weight has grown exponentially, with its outward-looking economy becoming increasingly prominent in international trade. Moreover, Prof. Defraigne argued that despite the growing economic interdependence between China and the US, the possibility of a “hot war” should not be disregarded. In fact, this interdependence could lead to a backward trend given the substantial increase of intra-regional trade compared to inter-regional trade, which has lagged, if not stagnated. This change in the global supply chain has brought about a slowdown which resulted in the proliferation of protectionist measures and the re-organisation of international trade. The speaker further reaffirmed that global events have become worrying, highlighting the conflicting approaches both the US and China have undertaken in keeping up with the current situation.

The second speaker was Professor Dr Xinning Song of Renmin University in China. Prof. Song acknowledged that the book provided an extensive analysis of the impact of the relations between the US and China in Asia. Similar to the previous speaker’s arguments, albeit more focused on the Asian region, Prof. Song identified key concepts in the “new Cold War”. He underlined the role of Asian countries which have made an impact on the relations between the US and China, taking into account the comprehensiveness of the economic interdependence in the region. As other Asian countries and China benefit mutually from each other, it is unlikely that a new Cold War in Asia will emerge in the near future. In the same way, relations between the US and China can be understood as “normal”, given their respective roles as existing and rising powers. However, according to Prof. Song, the gradual shift in policy decisions taken by the US relating to China has posed challenges for bilateral relations. This shift cannot be taken for granted for it may cause severe repercussions globally.

Finally, Professor Dr Plasschaert, Senior Associate at the European Institute of Asian Studies, praised the book for its timeliness in discussing the subject matter in the midst of current events. He discussed the recent developments of late 2017, including President Trump’s idiosyncratic behaviour, the overall imbalance of trade caused by the relations  between the US and China, China’s developing relationship with the European region, and China’s industrial development programme – which encompasses several sectors. These events have proven that the world is rapidly moving from a unipolar world to what Prof. Plasschaert described as, “an uneasy duopoly of power […] that will shake the fate of the world”.

At the end of the panel discussion, some questions from the audience were gathered. When asked about the Belt and Road Initiative, Ms Woodward identified it as the most significant development in modern times, whereas Prof. Defraigne compared it to the Marshall Plan, pointing out that its impacts may be lower than expected. A few questions were also raised concerning the relations of the US and China towards other countries, where the discussants unanimously agreed that despite the apparent clash between two powers, there are ways in which their policies complement each other. In this regard, it was stated that there is much more cooperation going on between the US and China than is perceived.

Ms Woodward, together with the other speakers, coherently presented an in-depth and pertinent analysis of the complex ways in which the US and China influence each other’s strategies. Acknowledging the need to address the lack of education and understanding about China, this book offers insights into how its relations with the US will unfold and how its growing position in the international arena will further impact the world’s situation for years ahead.