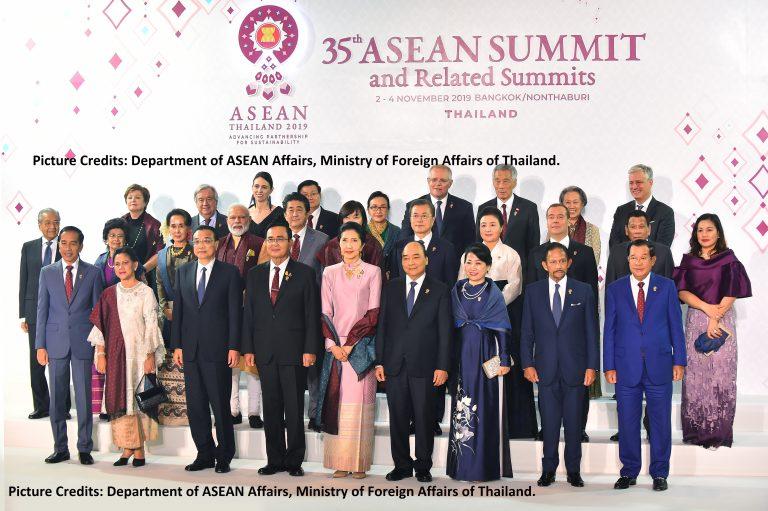 A Snapshot of the 35th ASEAN Summit: Between American Ghosts, Chinese Tacticians and Indian Protectionists.

From 2 to 4 November 2019, Bangkok hosted the 35th ASEAN Summit. The Summit consisted of a series of high-level meetings between ASEAN and dignitaries from international organisations such as the UN and the IMF, as well as from neighbouring and global powers. This four-day event served as a central platform to discuss and negotiate a number of pressing issues, significant not just to regional actors but also on a global level. Overarching concerns such as climate change and the need for sustainability have been addressed, as well as security and economic-related topics specific to the Indo-Pacific region. Among the latter, the finalisation of negotiations of the Regional Comprehensive Economic Partnership (RCEP) has been at the forefront as the main economic objective the ASEAN Summit was designed to achieve.

Looking at this summit through the lens of big power dynamics, the 35th ASEAN Summit seems to further support the idea that a significant shift in global and regional power dynamics has taken place. On one hand, the concurring 7th ASEAN-US Summit did not result in any significant step forward in ASEAN-US relations. On the contrary, the absence of the US President Donald Trump could be interpreted as a further indicator of Washington’s progressive withdrawal from regional multilateral mechanisms – and as an additional proof that the US’ Pivot to Asia has come to an end. On the other hand, the 22nd ASEAN-China Summit, also organised under the ASEAN Summit umbrella, was played at an entirely different level. Beijing seemed to get closer to ASEAN and to step up its support towards the regional role of the institution. The South China Sea dispute was side-lined in favour of a decisive move towards a more comprehensive ASEAN-China Strategic Partnership. The signing of several ASEAN-China agreements – notably strengthening China-ASEAN exchanges and cooperation in media and enhancing coordination between the Master Plan on ASEAN Connectivity (MPAC) 2025 and China’s Belt and Road Initiative (BRI) – gave room to a greater institutional and financial influence of Beijing among ASEAN member states.

The Summit has also been essential to shed light on ongoing relations between Asian emerging powers. In this regard, the successful conclusion of a seven-year negotiation process for the establishment of RCEP was probably among the most relevant expected outcomes of this Summit. The idea of such a regional partnership, which was expected to be officially reached on Monday 4 November, originated from the 21st ASEAN Summit and Related Summits in Phnom Penh, Cambodia in November 2012. It stemmed from the desire of creating a comprehensive economic agreement between the 10-nation regional bloc and its six FTA partners – namely China, Japan, the Republic of Korea, India, Australia and New Zealand. RCEP is intended to enhance regional economic integration so to limit economic dependency, such as the incidence of potential shocks resulting from global economic setbacks. This economic partnership aims to liberalise intra-regional trade in goods and services, facilitating investments, economic and technical cooperation. Included in the agreement is also the creation of a regional framework to deal with issues such as intellectual property, competition, dispute settlement and e-commerce. If finalised, RCEP would create the largest regional trade area, accounting for roughly 30% of the world’s GDP. With the 16 countries being significantly different in terms of economic development, such a regional free trade area is particularly beneficial for the stronger economies involved, while potentially challenging for the rest of them. An easier flow in goods and services would, for instance, enlarge market access for the already powerful economies involved while enhancing overall consumer access to goods and services within the region. At the same time, such a commercial regional free flow would potentially be detrimental for local industries in less developed and slower economies, faced with increasing external competition which would be likely to become unsustainable.

In contrast with the positive attitude shown by the majority of countries involved, New Delhi was wary with regard to liberalising its market to the extent outlined in RCEP. Its main concern was for such an opening up to further heighten the country’s economic slowdown and worsen its trade deficit vis-à-vis Beijing. During the Summit, Indian PM Narendra Modi voiced these concerns and declared that the country was decided on not joining RCEP. He requested for further re-negotiations of pressing issues in defence of India’s national interests. India’s main concern remains the enhancement of RCEP regulations for protection against uncontrolled surges in imports. For strategic reasons, India also wanted to keep a number of sectors – such as dairy, fishing, textile and pharma – as well as e-commerce out of the agreement. The relevance of India’s decision not to join RCEP to domestic politics and consensus building should not be overlooked. On the same day when RCEP was discussed at the ASEAN Summit, Modi’s political opponents met to discuss their concerns about the country’s economy. The government’s propensity to join RCEP was a central point in the opposition’s joint strategy to discredit Modi and blame the ruling BJP for India’s economic slowdown, rising unemployment and farm crisis.

To conclude, the 35th ASEAN Summit has been essential to confirm ongoing trends in the international arena, which are particularly significant to the EU. It showed the continued decline of the US interest in participating in multilateral regionalist mechanisms, as opposed to China’s growing engagement with – and influence on – multilateral institutions. It also further displayed India’s protectionist approach vis-à-vis deeper economic integration with other world economies due to conflicting domestic interests. Although the fear of uncontrolled import flows from China would be a scenario likely to have substantial detrimental effects on the Indian economy, this is not the first showcase of India’s economic protectionism. Brussels and New Delhi have been negotiating an FTA since 2007 and to date little progress has been made, with the main contention points being automobile tariffs, the issue of data security and the movement of professionals. With not just the US but also India once again proving to be reluctant to join emerging trade blocks, the latest ASEAN Summit has raised fundamental questions about the concept of the Indo-Pacific and the likelihood of New Delhi balancing China’s economic dominance in Asia.