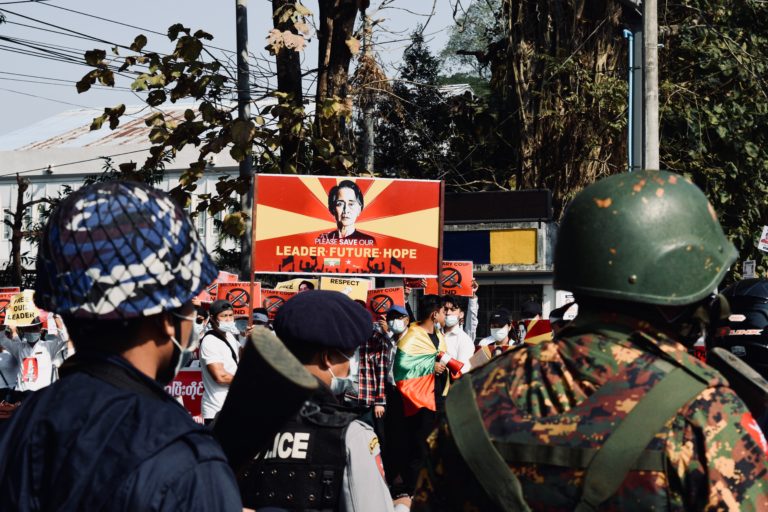 More than a year after the military coup and the beginning of violent clashes between the Tatmadaw and its opponents, Myanmar continues to experience unrest. The ongoing violence in the country is overshadowed by the Junta's announcement to start carry out the death penalty for the first time in decades. The humanitarian crisis, shortages of goods and soaring prices for commodities are intensified by side effects of international sanctions, the covid-19 pandemic and global dynamics. Despite the severity of the crisis, the European Union has remained rather silent as of lately.

On 23 July 2022, pro-democracy activist Kyaw Min Yu (Ko Jimmy) and former National League for Democracy (NLD) Member of Parliament Phyo Zayar Thaw were hanged in Yangon’s Insein Prison along with two other men, Hla Myo Aung and Aung Thura Zaw, following accusations of violating the “counterterrorism” law. The first judicial executions since 1988 have caused global criticism. The European Union reacted by stating that it “strongly condemns […] these politically motivated executions.” The Association of Southeast Asian Nations (ASEAN) expressed its “strong disappointment over the executions”, adding that “the implementation of the death sentences just a week before the 55th ASEAN ministerial meeting is highly reprehensible […] and showed the junta’s gross lack of will to support ASEAN’s UN-backed peace plan”. A statement released by the ASEAN Parliamentarians for Human Rights denounced the executions as “appalling acts of evil” and the United Nations Human Rights Council called them a “cruel and regressive step.”

Escalation of Violence since the coup

On 1 February 2021, the Myanmar armed forces staged a coup against the democratically elected government under Aung San Suu Kyi’s National League for Democracy (NLD), which had won 83 percent of the available seats in the November 2020 elections. Having held the country’s de facto leadership position since 2015, Suu Kyi had always had to balance her relations with the country’s military generals. As the new parliamentary term was set to begin on the day of the coup, the military declared a state of emergency, dissolved the bicameral parliament and installed former vice president Myint Swe as the acting head of state. Thousands of NLD representatives, activists and journalists were arrested, and hundreds of people were killed in violent confrontations of subsequent nationwide anti-coup demonstrations.

Since March 2022, an escalation of violence has been observed and reports of arbitrary executions and torture have been mounting. More than 2000 people are believed to have been killed since the beginning of the coup, while more than 8,000 people have been imprisoned.

The European Union responded to the coup by imposing comprehensive sanctions on Myanmar, as did the United Nations and the United States, among other international actors. Since 22 February 2021, a total of 4 rounds of sanctions have been implemented, in which the existing measures were intensified and extended, most recently on 22 February 2022. The sanctions included measures against individuals (in or associated with the military), whose assets have been frozen and who have been banned from entering the EU territory, as well as arms export bans and economic sanctions against companies in many sectors of the Burmese economy believed to be affiliated with the Junta.

While EU development aid was suspended, Myanmar retained its Everything but Arms (EBA) benefits. This status allows tax-free exports from developing countries into the EU. It is granted to least developed countries (LDC) and can be withdrawn on the basis of serious violations of human rights. Critics argue that given the coup and the ongoing violence human rights in Myanmar are no longer safeguarded. However, it is feared that an exclusion from the EBA scheme could further aggravate the situation of the country’s civilian population, especially of workers in the garment sector.

The EU emphasized its intention to use these smart (also called targeted) sanctions primarily to harm the military government and not the civilian population. The EU’s primary demands include an immediate cessation of all hostilities and an end to the excessive use of force and the state of emergency.

Much has happened since the EU has implemented the sanctions and the situation in Myanmar is becoming increasingly difficult, especially for the civilian population. A recent UN report estimates that the conflict has already generated more than one million internally displaced persons. This mainly as a result of the Junta’s repeated attacks on villages in their search for suspected opposition fighters. Reports from 7 June 2022 have accused the Junta of destroying several villages and over 400 homes in southern Sagaing’s Chaung-U township. The victims reportedly include at least one resistance fighter and several civilians. While Suu Kyi has been under house arrest for the past year, it was announced on 23 June 2022 that she has been transferred to solitary confinement in a prison in the capital city of Nay Pyi Taw.

Furthermore, on 3 June 2022, the military government announced it would execute four opponents of the regime who had been sentenced to death for violating the “counterterrorism” law. These include former MP Phyo Zeya Thaw and democracy activist Kyaw Min Yu. Internationally, the announcement was widely condemned as the United Nations, the EU, the United States and France (among others) have all criticized the Junta’s plans. UN Secretary-General Antonio Guterres stated that the international community was “deeply troubled” by the announcement, and France declared the current government to be an “illegitimate military government”. If the Junta follows through, these would be the first judicial executions in the country since 1988. Other countries, such as the United Kingdom and Australia, have announced to reduce their diplomatic ties with Myanmar as a result of the ongoing human rights violations in the country. Although the European Union describes the death penalty as a “cruel, inhumane and degrading punishment” that it strongly opposes, so far there has been little official reaction to Myanmar’s announcement on the executions. In the meantime, anti-regime groups within Myanmar have already announced retaliation should the executions be carried out. Overall, the situation suggests a further stage of violent escalation.

In addition, the humanitarian crisis in Myanmar is intensifying due to increasing commodity prices and shortages of goods. The humanitarian crisis is, of course, also fueled by many global events like the aftermath of the COVID-19 pandemic, unreliable supply chains, and the war in Ukraine. Furthermore,  the regime’s ongoing violent clashes with protesters, as well as undesirable side effects of the sanctions the EU and other international actors have imposed on Myanmar are also contributing to the country’s instability.  The situation is dire and is making the collapse of the transport sector imminent. The rise in fuel prices is causing cargo and transport service providers to fear they will soon have to suspend their business. Having been operating at a loss for some time, Myanmar Trade Center Co., a company that operates buses between Yangon and Bago, already announced to suspend its operations. Soaring prices are not only hitting carriers hard, also the cost of transporting and providing medical care to patients are stretching welfare organizations to their limits. Power cuts and high prices are also threatening almost all garment factories in Myanmar with closure. Currently, around 700,000 people in Myanmar still work in the garment industry, while almost 200,000 employees have already lost their jobs over the past year.

What about the EU?

In February 2022, the EU further expanded its sanctions against Myanmar to include companies in the gas and oil sectors, which are believed to be a lucrative source of revenue for the military government. The EU was the first international entity to introduce such a measure against the Junta, citing its “deep concern” about the ongoing and increasingly brutal violations of human rights on the ground.

While in May 2022 the EU stepped up its humanitarian aid assistance to Rohingya refugees and other conflict-affected people in Myanmar by 22 million EUR, the EU has remained rather silent on  the  developments in Myanmar over the past few months, such as on the announced executions, the ongoing violation of human rights and the intensifying humanitarian crisis.

Russia’s invasion of Ukraine preoccupies the EU and has diverted its attention towards its neighbourhood. While other countries have openly expressed their displeasure about the announced executions in Myanmar, it was not until seven days after having been made public on 10 June 2022, that EU spokeswoman Nabila Massrali tweeted on the bloc’s position. Furthermore, in an oral inquiry at the 50th regular session of the United Nations Human Rights Council in Geneva on 13 June 2022, the EU also expressed deep concern about the ongoing escalation of violence in the country, calling on the junta not to carry out the announced executions. The EU’s reluctance to speak out more loudly could potentially also be attributed to the lobbying by this year’s ASEAN chair Cambodia convincing the EU to let ASEAN take the lead. The EU supported an ASEAN-led response to the Myanmar crisis from the beginning and could assume criticism of the Junta’s planned executions would be more resonant coming from its neighbours. Consistent with this is the second visit to Myanmar by Cambodia’s Foreign Minister and ASEAN Special Envoy Prak Sokhonn on 29 June 2022. However, considering that only three Southeast Asian countries, Cambodia, Timor-Leste and the Philippines, have formally abolished the death penalty, it is unlikely that the other regional governments will openly criticize the Junta on this matter.

Given the EU’s status as a promoter of human rights, the rule of law and the right to life, the absence of a strong official EU reaction to the announced executions comes as somewhat of a surprise.

The sanctions have so far not only failed to yield the desired outcome, they may even be further contributing to the worsening situation in the country. The EU’s targeted sanctions’ primary goal is to damage the regime, induce it to change its behavior, and not to harm the civilian population. In practice, however, this proves to be difficult as the regime’s actions and unwillingness to engage in dialogue is putting an additional burden on the population and making them suffer even more. The EU and other sanctioning entities must therefore consider the extent to which their own sanctions are contributing to the worsening supply crisis in Myanmar. What humanitarian actions could be taken to mitigate the undesired side effects of the sanctions? This is a particularly challenging exercise as it remains a critical goal to avoid inadvertently helping the military regime gain legitimacy.  As a normative power, the EU should try to take up a more active role within the international community in addressing the needs of the people of Myanmar and to promote human rights in the country. The EU could accompany possible future peace negotiations, as well as providing financial and economic incentives for democratization. Nevertheless, the EU would remain dependent on the military government’s willingness to cooperate, which is likely to prove difficult. In this case, a first important signal would be to strongly condemn the announced executions and to further increase the international pressure on the regime.

In 2021, the European Parliament passed a motion recognizing the National Unity Government of the Republic of the Union of Myanmar (NUG) and the National Unity Consultative Council (NUCC) as the only legitimate representatives of the democratic wishes of the people of Myanmar. However, it is unlikely that the Commission will follow suit. This step would inevitably mean the non-recognition of the military Junta and probably lead to the closure of the European Delegation in Yangon. Recognition of the opposition would also entail a commitment to provide more than rhetorical support for the NUG’s current political and armed struggle against the Junta. However, the European Union seems not prepared to take such a step. Nevertheless, activists in Myanmar point out that engaging with the Junta also means taking sides. Still, the ambiguity of the current status quo, in which foreign governments maintain embassies in Yangon or Naypyidaw without formally recognizing the coup government, currently appears the least risky of the available options. The EU will need to reassess its approach taking into account the country’s most recent developments, while assisting to a constructive outcome for the people of Myanmar.