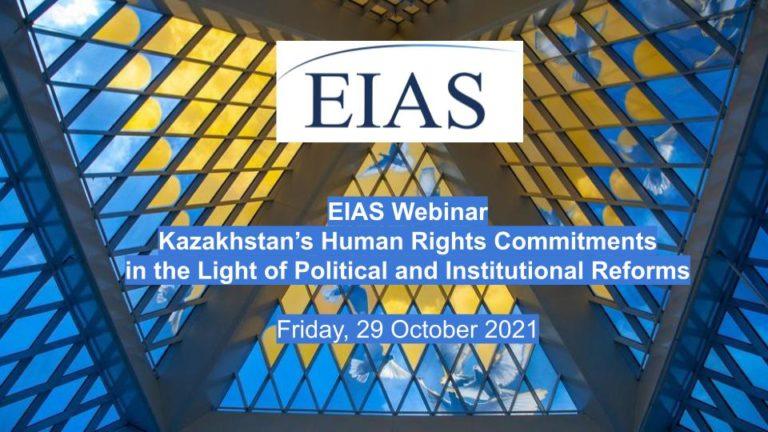 Recording of the EIAS Webinar on Kazakhstan’s International Human Rights Commitments in the Light of Political and Institutional Reforms of 29.10.2021

Watch the recording of our EIAS Webinar on Kazakhstan's International Human Rights Commitments in the Light of Political and Institutional Reforms of 29.10.2021
WATCH THE WEBINAR

On 29 October 2021 EIAS hosted a Webinar on Kazakhstan’s International Human RIghts Commitments in the Light of Political and Institutional Reforms. The topic of the webinar was very timely as on 14 October 2021, Kazakhstan was elected as a member to the next upcoming rotation round of the United Nations Human Rights Council for 2022-2024, after its previous successful participation in the 2013-2015 UN Human Rights Council. Kazakhstan will focus its priorities for this Council’s round on gender equality and women empowerment, the universal abolition of the death penalty, the fight against discrimination, freedom of religion and belief, human rights in the context of climate change, digital inequality, education, and the respect of human rights in the fight against COVID-19.

This year, Kazakhstan is also celebrating its 30th anniversary of independence. The country has benefited from continuous economic and social developments. Most notably, within the past two years there has been significant political reforms seeking to address the expansion of civil and human rights within the nation, under President Kassym-Jomart Tokayev and his government.

Legislation adopted has been primarily aimed at increasing political participation, female representation, government transparency and accountability as well as greater protection of the rights for females, minorities, and citizens with disabilities. Kazakhstan has also substantially reformed its judicial system in recent years to combat corruption and found a legal system with greater independence of courts and judges. The collaborative spirit of Kazakhstan in engaging with EU and UN Human Rights dialogues is demonstrated further by its future commitments.

As outlined by Acquis EU Law & Policy in their Report on Human Rights in Kazakhstan: ‘The Republic of Kazakhstan has signed and/or ratified a wide range of international treaties and agreements through which it has established a solid bases of Human Rights commitments’. Since 2020, the nation has committed to conform to 214 of the 245 (87%) recommendations by the UN’s Universal Periodic Review (UPR). As recently as June 2021, the President signed a decree “On further human rights measures in Kazakhstan”, approving the “Human Rights Priority Action Plan” to implement this decree. Due to the rapid implementations of such reforms, and the continued growth of Kazakhstan into a globalised democracy, there is a mutually beneficial opportunity in expanding the cooperation between the EU and the Republic. In this EIAS webinar, the presentation of the report by Jeroen Jansen served as a platform to discuss the reforms made as well as the overall human rights situation in Kazakhstan and its international significance.

You can watch the recording of the webinar here