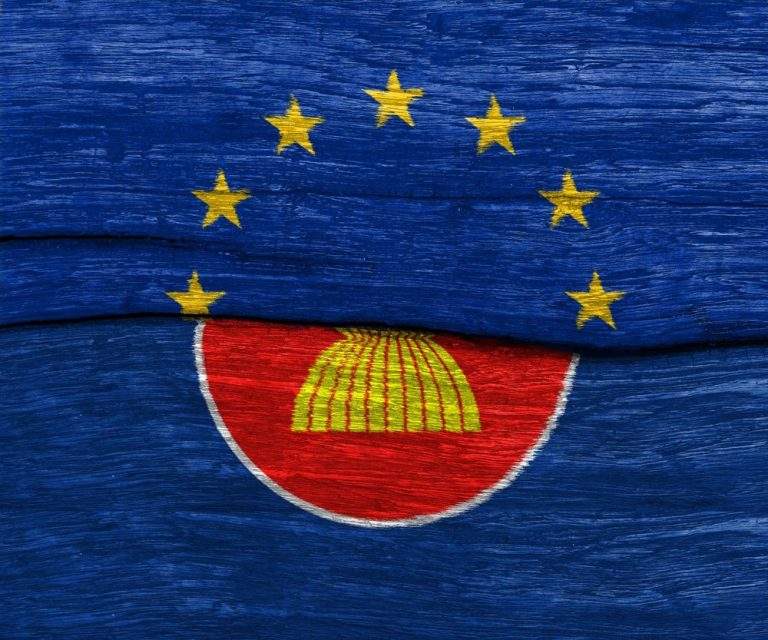 On 1 December 2020, a historic decision was announced on the occasion of the 23rd ASEAN-EU Ministerial Meeting (AEMM). Forty-three years after the inauguration of the EU-ASEAN dialogue, the two major regional organizations elevated their Dialogue Partnership to an EU-ASEAN Strategic Partnership. In the spirit of shared values and mutual cooperation, this decision inaugurates a new chapter in the long-standing relationship between the EU and ASEAN.

How the EU-ASEAN Strategic Partnership came to be

The proposal to upgrade EU-ASEAN relation to a strategic partnership had initially been put on hold for almost eight years. Already in 2012, ASEAN proposed the EU to upgrade their relationship to a strategic partnership, but a hesitant European foreign policy and disputes over palm oil – mostly with Malaysia and Indonesia – kept hindering negotiations. This scenario changed over time as on the EU side, Asia is increasingly considered as an area of key priority.  In particular, ASEAN is progressively perceived as an essential partner in terms of trade, digital connectivity and global security in Asia. On the ASEAN side, palm oil negotiations have gradually progressed and during the 23rd AEMM, a joint working group on vegetable oil production was decided to be launched.

Other recent events vested an additional spotlight on the ASEAN bloc. The official endorsement by the German government of the “Indo-Pacific” concept in September 2020 added value to the EU’s interest in the region (see “An Indo-Pacific Outlook for the European Union”), while the tensions in the South China Sea recalled the importance of the region for global security, given that around 40 percent of the EU’s foreign trade passes through these regional waters. In addition, US President-elect Joe Biden is expected to initiate re-engagement with Southeast Asia, implying a more severe competition for attention.

The benefits of the EU-ASEAN Strategic partnership

The 23rd AEMM was co-chaired by Singapore’s Minister for Foreign Affairs Dr Vivian Balakrishnan, the Foreign Ministers from all ASEAN Member Countries and the 27 EU Member States, the ASEAN Secretariat and the European Commission. The meeting offered the occasion to discuss the achievements of ASEAN and the EU and to relaunch their mutual commitment for a deeper and robust partnership. Accordingly, the discussion agenda was wide-ranging, addressing topics from the health crisis to sustainability, trade, digital connectivity and geopolitical challenges, the increasing role of the Indo-Pacific region and US-China contentions. On the subject of the health emergency, the EU and ASEAN encouraged greater cooperation to strengthen both regions’ capacity to respond to such types of emergencies and to scale-up the diffusion of vaccines. On this matter, despite COVID-19 having challenged the solidity of the EU-ASEAN cooperation, the two organizations seem to have notably stood the test. Surprisingly, they have taken the opportunity to not only reaffirm their partnership but also to reinforce it. Indeed, since the beginning of the pandemic, the EU and ASEAN have intensified their cooperation in the fight against Covid-19, promoting a multitude of aid packages and joint programmes. Despite the efficacy in mitigating the impact of COVID-19 potentially to be questioned, the recent relaunch of EU-ASEAN cooperation surely did not miss its point. The EU and ASEAN acknowledge the potential of regional cooperation and how they could both greatly benefit from it, thereby seizing the opportunity to upgrade their partnership to a more strategic level.

In this regard, the meeting offered the occasion to enhance cooperation on a multitude of topics, among which environmental protection. The sustainability chapter is surely one of the most contended topics of EU-ASEAN talks, with palm oil contentions often in the spotlights. During the 23rd AEMM, leaders recognised the need to reinforce cooperation in view of the implementation of the 2030 Agenda and its Sustainable Development Goals. Accordingly, they relaunched their concerted efforts to conserve and sustainably use the region’s natural heritage, protecting ASEAN’s biodiversity and reaffirming their commitment in strengthening an efficient and sustainable ASEAN-EU connectivity, a key priority for the inter-regional relationship. Furthermore, to address the challenge of vegetable oil production, the leaders welcomed the launch of a joint working group between the EU and relevant ASEAN Member States involved, which will convene its first meeting in January 2021. Another topic of great relevance recalled during the meeting, was the role of ASEAN in the evolving current geopolitical context, notably its presence in the Indo-Pacific and its position in the US-China rivalry. Surely, this scenario is challenging ASEAN, which seems to be struggling in strategically positioning itself. On this, just recently, Josep Borrell recalled the 23rd AEMM, reaffirming that the EU is not asking ASEAN to “choose sides” but given that ASEAN is looking to build new pillars to reinforce its stability and prosperity, the EU’s reliability and consistency represent valuable assets for ASEAN’s strategic partnerships.

Finally, leaders identified other key topics through which EU-ASEAN cooperation should be expanded, notably maritime cooperation, reaffirming the importance of maintaining freedom of navigation in the South China Sea; digitalisation, encouraging public-private engagements for the digital revolution of Small and Medium Enterprises (SMEs); and supporting ASEAN regional integration efforts, welcoming the launch of the ASEAN Customs Transit System (ACTS) of 30 November 2020.

The EU-ASEAN Strategic partnership: What is next?

The upgrade of EU-ASEAN cooperation to a strategic partnership marks a historic moment for the relations between the two regional organizations. Both the EU and ASEAN seem to have understood that, in order to ensure stable and sustainable growth, a stronger partnership is crucial. However, now that this step has been taken, the real work begins. To confirm that the EU-ASEAN strategic partnership marks a substantive change and not merely a revival of political commitment,  the two organizations will need to cooperate for the promotion of an agenda with feasible solutions for common challenges. On this, an important point of departure would be the relaunch of negotiations for the EU-ASEAN FTA. They were recalled at the 23rd AEMM as the step that would “send a strong signal of both regions’ commitment to bring tangible benefits through economic integration and trade liberalisation”. However, despite a few steps in this direction, such as EU FTA agreements with Singapore and Vietnam, there is still a long way to go.  One of the main stumbling blocks has been a lack of commitment on both sides. Now that this obstacle has been removed, great expectations are placed on the future of the EU-ASEAN strategic partnership.